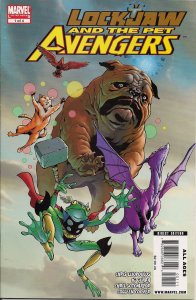 Reed Richards wants the Inhumans to help him find one of those cosmic Infinity Gems, but Lockjaw’s ahead of the game, sniffing one out in no short order. What a shame no one pays him any attention, nasty old Medusa even telling him to bugger off. Which he does, to gather a team of heroic animals who will show the humans how it’s done. Well, I assume this is the mind gem-boosted Lockjaw’s plan, as he’s the only animal who doesn’t get to speak in this comic.

This first of four issues is a fun romp and thoroughly light-hearted. Well, almost. God knows why, but Chris Eliopoulos (writer of Franklin Richards: Dark Reindeer, a Christmas special I, er, just made up) brings up the dead pregnant wife when telling the origin of Throg. Honestly, what do the kids need to know other than that a frog had a sliver of Thor’s hammer and was worthy enough to tap into its magic?

Oh, and Lockheed is a bit of a downer, whining on about those he’s lost – you don’t even get that much angst for the lost Kitty Pryde in the X-Men titles.

Overall, though, this is a hoot, with Ms Lion being the other standout character – hey, why isn’t that pooch on my Karl Kerschl cover? – managing to shut the chatty animals up with a stunning revelation. Which I’m not going to spoil, but here’s an example of the book’s general tone:

The art from Ig Guara (main story), Colleen Coover (downer Throg origin) and Chris Sotomayor (colours) is a joy too; Guara does a terrific job of giving the animals expression without making them too anthropomorphic.

This mini runs to four issues and I expect I’ll love every one. Now, when are DC going to give us Krypto and the Legion of Super Pets?

One thought on “Lockjaw and the Pet Avengers #1 review”