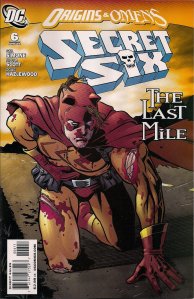 One of DC’s most consistently entertaining series, Secret Six delivers once more this month. Yes, the storyline around the ‘Get out of Hell free’ card storyline begun in issue 1 shows no signs of wrapping, but neither is there evidence of flagging. As a maguffin to motivate action and character dynamics, the card is first-rate. Part Six of Unhinged, Compound Fracture, offers a face-off with the wicked Junior, the secret of Jeanette, the revelation of the Six’s shadowy employer, and a surprising betrayal.

Said betrayal disappointed me, but that’s a measure of how likeable writer Gail Simone has made this team. It seems there really is no honour among thieves. Narration and dialogue are top-notch, with even the minor characters having their own voice, while the constant twists and turns are delightful. Of course this storyline will be collected on completion, but Simone never forgets that she’s writing a monthly comic, packing each issue with enough nuggets of nastiness to make this a story I’m unwilling to wait a while for. 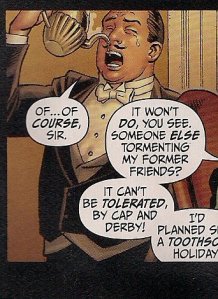 (An incidental pleasure of this book is the henchman abuse. Whether it’s Junior killing his former conjoined twins, Jeanette’s butlers getting slaughtered by Cheshire and co, or this poor guy – spot the clue to the mystery employer – the underlings just can’t catch a break.

It’s a shorter than usual Six chapter this month, as three pages are thrown in the direction of the Origins and Omens strand (DC gives us three extra pages for free). So the rogue Guardian of the Universe is back for another round of Scar Blah Blah. This time we’re told the story of the Six from Villains United on, so that’s the Origins covered. There’s little ominous here, though. Simone delivers an efficient script, with a trademark surprise, and Pete Woods draws real pretty. In the main though, it’s a distraction from the main event.

Scar, please take your Book of the Black and go find a plastic surgeon.

One thought on “Secret Six 6 review”