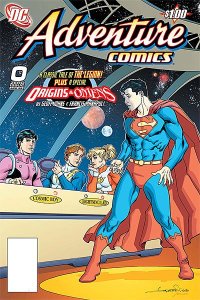 Good on DC for a cheap reprint of the first appearance by the Legion of Super-Heroes, from Adventure Comics 247. I’m sure everyone reading this is familiar with the story – three mysterious kids with super-powers play mindgames with Superboy in the 20th century as a precursor to playing mindgames with him in the 30th century. But they then offer him membership in their super-hero club, so that’s all right then. It’s typical Silver Age Superman Family stuff, charming but, as is often the case, emotionally skewed. You have to hand it to writer Otto Binder and artist Al Plastino, though – their basic concept of a teenage hero team had legs. By issue 300, after regular cameos in the Superman Family of books, they were backing up Superboy in their own strip, and they went on to take the lead slot and, finally, the whole book.

Further proof of the potency of that original idea is that, 51 years later, the Legion are about to take up residency in a book named Adventure Comics for a second time (third, if we’re counting their 1980s reprint digest). Before that, though, we have this special’s new strip, a six-pager on the Origins and Omens theme threading through the DC Universe line this month. Narrated by rogue Guardian of the Universe Scar, it features Lex Luthor in his current role of lackey to General Sam Lane, for some reason allowed free reign to tinker with sleeping android conqueror Brainiac. Lex thinks he’s clever for waking Brainiac, but Brainiac tells Luthor he’s the clever one as that was his plan. At the end of the book there’s foreshadowing that Kon-El, the clone of himself and Superman (is it actually a clone if the DNA of two people are involved? Anyone got a new word?), will be back in the upcoming Green Lantern Blackest Night event. Which readers were expecting anyway.

Written by Geoff Johns and illustrated by Francis Manapul (both pencils and inks, a trick he never tried on his recent Legion of Super-Heroes run), it’s a well-crafted short, but entirely missable. Superboy doesn’t return to life here, and the Superman strips will undoubtedly bring readers up to speed as to any upcoming Luthor-Brainiac team-up. And one Origins and Omens strip in, I’m already hugely irritated by Scar’s portentous narration and her stupid Book of the Black. In a universe where time travel is not only possible, but frequent, why would anyone set any store by prophecies? Nothing is certain, and anything can be changed. So why not just focus on your goal, and go for it. I’ve always found storytellers in comics a leaden narrative device and this story does nothing to change my mind.

Manapul’s art is attractive, moodier than his Legion work, but he needs to keep on eye on the model sheets – Brainiac is much wirier here than in Action, where Gary Frank has established him as buff. Still, he gets the job done nicely.

The other new piece of art this issue is a pleasant Aaron Lopresti homage to Adventure Comics 247, though Saturn girl, Lightning Lad and Cosmic Boy are in their revised Silver Age uniforms, rather than the originals from that first strip. Disgraceful!

Now we’ve had the appetiser, I want the main event. Roll on June and (new) Adventure Comics 1.