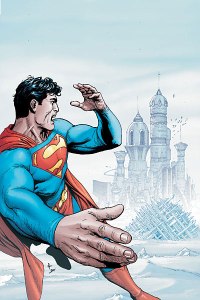 Kicking off the big storyline that will integrate Superman, Action Comics and Supergirl, Superman: New Krypton arrives with a bang. An emotional bang, as Smallville says goodbye to Jonathan Kent, who died in the latest Action Comics after an encounter with a Brainiac bomb. The book’s opening scene was sad, but I was distracted by a need to Google the apparent quote on Pa Kent’s tombstone: ‘We were put on this earth for a reason, but it’s up to us to find it’ And . . . Google is no help. Could it be an original Pa Kent quote I’ve missed? The guy was all about homespun philosophy, after all. Anyway, I’ve made a note for my executors – I’m stealing it.

This scene is followed by the image of the issue, as Superman fantasises a visit to Brainiac’s cell, his stride purposeful, his eyes blazing with hate. It was a shock to see the subsequent beating he imagined giving the Coluan, but given that he was responsible for the death of his father, well, wouldn’t you? I’m sure even the sainted Jonathan would.

Back on the farm (or still on the farm, as the Brainiac sequence may have been Clark flashing back), Lois tries to comfort Clark, but he’s more interested in his Dad’s keepsake chest. The sequence was mildly affecting, but unnecessary once the concluding shot arrived; a full-pager of Clark in a big empty space, sobbing.

While I’m sad about the latest death of Pa Kent, the loss of him allows Ma Kent to take on a richer characterisation. Previously she was simply Wise Head Number Two, but now she’s showing a strong mind of her own. And I like that.

What I don’t like is that Clark leaves Martha to visit the newly enlarged Kandor. Yes, he had to check in soon, but there are any number of other heroes who could deputise for him for a while. Wonder Woman, for example, with her diplomatic nous, would be just the person to keep those Kandorians in check while Clark spent some quality time with his bereaved Ma. Sure, she says to go do some good but, right then, she needed him more than his fellow Kryptonians.

Who, I must say, are already proving an annoying lot. I was brought up in the Silver Age, I’m not used to Kandorians with a mind of their own; they’re supposed to say ‘Yes Superman.’ ‘No Superman. ‘Three bags full, Superman.’ But here they are, headed by Uncle Zor and Auntie Alura, deciding to explore and beginning by carelessly killing a poor old whale. Mind, Zor does look good in his strictly Silver Age togs – and it’s interesting to see that the poncy fashions from Krypton’s House of Byrne still exist among a style-challenged contingent.

The big moment for me this issue was the reintroduction of Lois’ sister, Lucy Lane. I’ve been wondering about her status since her post-Crisis hubby, tyro Planet hack Ron Troupe, turned up recently as the Planet’s grand old man. And here she is, still young but no longer a young housewife – look at the uniform, she’s an air stewardess again . . . she’s not? Army you say? Bah, where’s the fun in that? Oh well, a uniform is a uniform, and Jimmy Olsen always liked her in uniform. I’m assuming she’s no longer married to Ron and never has been. The shame here is that means that she no longer has a baby – I rather liked Lois and Clark as auntie and uncle. Gotta love those Infinite Crisis waves, I suppose.

The drama between Lois and Lucy was terribly soapy, all that ‘you never loved Dad’ palava, but it’s been so long since Lois has had a plot to call her own, and I’m so pleased to see my old pal Lucy (anyone else remember the time she was magically, tragically turned into an old lady?), that I can forgive.

I’m less forgiving about the ending. Sam Lane still alive and revealed as the army fella out to get Superman. Oh come on, that’s too much in the way of symmetrical soapiness – Pa dies, Sam rises? And makes a pact with Lex Luthor? It reminds me of when Wonder Woman’s mother was resurrected and immediately condoned the murderous Amazons Attack. If DC are going to give every reborn parent an evil personality, I’d rather they left them to fester in the ground.

Apart from the return of the ‘read in this order’ triangles – now a shield, truth be told – the cover of the issue I have is pretty poor. Sure, Gary Frank’s illo of Superman is good, but Kandor is coloured so icily that its appearance has no impact.

The art inside, though, is all over good, with Action Comics illustrator Frank joined by occasional Superman artist Pete Woods and current artist Renato Guedes, plus various inkers and colourists. Whether we’re in Smallville, Metropolis, Stryker’s Island, Washington DC or Kandor, it’s stylish stuff filled with convincing ‘actors’. And their partners in words, Geoff Johns, James Robinson and Sterling Gates, provide a nicely paced, well-dialogued teaser for the next couple of years worth of Superman Family comics.

Now, if only they’d toss stupid Sam Lane back in the ground.