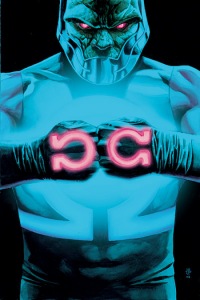 Evil has won and the heroes of the DCU are organising to take back the world. Not the biggest heroes as, refreshingly, Superman and Batman are MIA and Wonder Woman is batting for Darkseid’s team. So it’s up to a few members of the JLA, JSA, Metal Men, er, those Chinese fellas with complicated names and powers, and sundry others (I think I saw Negative Woman, for the first time in years) to fight on. Stepping up big time is the current Tattooed Man, having popped over from this week’s Final Crisis: Submit.
And then there’s the Ray who, with his light spectrum powers, is proving equally useful at search & rescue and spreading news of the resistance.

The news comes courtesy of a Daily Planet produced from Superman’s Fortress of Solitude, what with the electronic media having been drafted by the forces of Apokolips to spread the anti-life equation. As an old hack, I find it heartening to see the print medium still has a role in the shiny new DCU.

From pre-publicity I was expecting this issue to be something of a gloomfest, but we learn that the heroes have set up a series of watchtowers around the world and, marshaled by Alan Scott, are fighting on. The world has darkened but the heroes have set themselves up as shining beacons, led by the original Green Lantern – I like that.

Courtesy of the excellent art of JG Jones, Carlos Pacheco and Jesus Merino, we see the heroes fighting against Darkseid’s brainwash shock troops, the Justifiers, on several fronts; the absence of the Big Three allows Black Canary to actually do some JLA leading; and Barry Allen is reunited with Wally and Iris.

This last scene is lovely, as a kiss from the Silver Age Flash breaks the Apokoliptian spell his wife is under. Yeah, it’s corny as hell, but that’s Barry for you, and the power of love has been a theme in the Flash legacy ever since Wally took over, so it’s great to see Barry – short-hair and all – get in on the act. If we have to have a cheese-free explanation, let’s say it’s his link to the Speed Force or something (perhaps he should run round the world and snog everyone?).

While the reunion with Wally is pretty understated as these things go, Barry gets at least one killer line, as he discusses ‘the curse of the Flash Family’: ‘Everything gets done on the run and life happens in the rearview mirror.’ Smart stuff.

Elsewhere, Darkseid’s minions squabble over who he’ll be most pleased with when he finally takes over Ben Turpin’s body. This was entertaining, but I’d rather the space were given over to an explanation of why he’s chosen a frail old guy.

Random things I liked: The evil internet, the Ünternet; Flash fact; Uncle Sam, inevitably corrupted as America fell; Kara as leader of one Watchtower faction; further confirmation that Black Adam is a waste of space.

Finally this reads like a Crisis comic. Certainly, previous issues have been intriguing and entertaining, but mainly in the way a puzzle is entertaining. Here we have a very linear instalment offering big battles between heroes and villains, accompanied by plenty of contextual material. It’s a meaty, good-looking read, and bodes well for the rest of this series.

One thought on “Final Crisis 4”