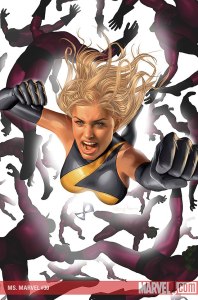 Look at that cover, the logo’s got it wrong . . . that’s not Ms Marvel, it’s Ms Modok. Seriously, when did her head get so big? It’s almost as if artist Greg Horn Photoshopped one body and a different head and combined them into one image, without quite getting them in proportion.

Interesting composition, mind, and representative of the last few issues, as Carol Danvers continues her Skrull killing spree. This issue, though, rather than lots of little Super-Skrull, she takes on a big Super-Duper Skrull and has her arse handed to her, surviving only because the baddie defeats himself. She’s been so annoying lately that I was delighted to see her gets a few lumps, even if she was a bit more palatable this time out. I think I actually noticed a brief moment of compassion.

The issue ends with two extra pages of story and art, set in Hong Kong a few months down the line (shades of TV Alias), but that’s not important right now. What is? The fact that I read a whole issue of Ms Marvel and didn’t hate the title character – that hasn’t happened for months, so well done writer Brian Reed and artists Adriana Melo, Paulo Siqueira and Mariah Benes. Let’s hope it’s the start of a trend.