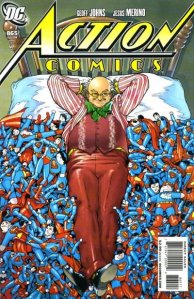 In which Winslow P Schott, the original Toyman going back to the Forties, returns to set the record straight about the little matter of his murdering Adam Grant, son of Cat Grant, several years ago. The witness he chooses to record his tale is a kidnapped Jimmy Olsen, the Daily Planet’s youthful photo-journalist. Why Jimmy? ‘Lois Lane and Clark Kent wouldn’t do. They wouldn’t listen, you see. They’re too old. They’re adults. That’s why I picked you. I don’t trust anyone over seventeen.’
Toyman tells Jimmy his sorry tale, that he was a kindly toymaker who fell into bad ways due to his naivety. Along the way, his wife Mary was murdered by an arms manufacturer who wanted his patents. So far, so ‘yeah, we know this story’. But Schott says he never killed Adam – that was one of several pseudo Toymen he now claims were fakes (the darker Toyman we saw kill Adam, the 1970s Toyman with the Jester hat, Jeph Loeb’s trendtastic Japanese Toyman, the Animated Series fella and – I think, but I barely remember the comic – a version who once fought Max Mercury). Schott claims the killer Toyman went loopy and he put it out of commission as soon as he could.
We see here how much Schott hates being locked up in Arkham Asylum (‘this place of mad nursery rhymes and stained straitjackets), finally learn how old Jimmy is, see that our red-headed cub reporter is one smart cookie and watch Schott taken in by a fitting guest star. A final revelation shows that Schott may not have killed Adam, but he was sure as heck twisted prior to committing whatever crimes are on record.
This is a wonderful comic; what could have been a mere exercise in continuity clean-up becomes a gripping look at the psyche of one of Superman’s oldest foes. Schott wants to be seen as sitting on the cuddlier side of villainy, but one way or another, he’s a bad lot. It’s also a nice spotlight on Jimmy Olsen, lending him far more character than did a whole year’s worth of Countdown. This is no stooge who takes ages before he thinks about what’s happening to him, this is a gutsy guy who has done his research, and acts at the first opportunity. He even wears a photographer’s vest, something artists remember to add exceedingly rarely.
The icing on the cake is that this issue, while a breather from the multi-parters of late, sets the stage for the return of one of the best post-Crisis supporting characters – Cat Grant, Metropolis gossip columnist and woman of many sides. She was written out after Adam’s death – his butchering gave her the kind of baggage even the most resilient supporting character finds hard to live with. (It’s ironic that the story meant to make Toyman a more threatening Superman villain not only made Cat Grant unusable, it seemingly forced writers to avoid him too; the brutal killing of Adam might have sat well on the Joker, but not on a guy named Toyman).
Now, though, the new light on her son’s tragedy makes her feel able to call Perry White and tell him she’s ready for a Metropolis return (explaining her appearance in the Planet staff spread in Action Annual 11 last month). This scene was the only problem I had with this issue. Cat says of Adam being slain not by the real Toyman, but by a robot: ‘As silly as it sounds, somehow it makes it easier . . . he didn’t suffer like I . . . what I’m trying to say is . . . I’m ready to come back.’ Excuse me? Adam’s death was exactly the same to him – knifed out of existence. But that’s a minor moan on my part – if that helps Cat cope, great. I’m just pleased she’s feeling a little bit better.
Cat’s face is unseen, for no reason that I can think of other than to tease Smallville fans that this is a sideways way to finally get a Chloe Sullivan character into the comic book cast – the haircut we see is very like one Allison Mack had for awhile. Or it could just be artist Jesus Merino having fun.
Ah Jesus Merino, where have you been hiding your artistic chops? I’m used to Mr Merino as inker to Carlos Pacheco, but here he handles pencils and inks and shows off two different styles. There’s the regular Superman house style for the parts of the story that are happening now, and a more impressionistic look for Schott’s memories of happier times. It’s very effective storytelling and compliments one of Geoff Johns’ flat-out best comics scripts marvellously. I want to see more from this team.
And more gorgeous Kevin Maguire covers wouldn’t hurt, either.
I’ve not mentioned Superman much. That’s because he’s barely in this book other than as a toy, a flashback or an idea. This issue is like one of the annual Doctor Who episodes which focusses more on his effect on his world than on the actual man, to give the lead actor a break in a tough schedule. It works so well that I never missed my favourite hero.
This run just gets better. And with the promise of Brainiac next issue, I wouldn’t bet against Geoff Johns’ and regular artist Gary Frank cranking up the fun even further. Action by name . . .