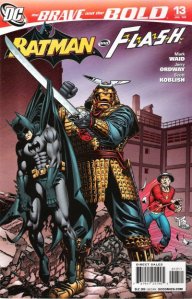 I enjoyed the longform plotline of the first year, but boy, it’s great to have a done-in-one, and a team-up we’ve never seen – Batman and the original Flash. Story and art are by Mark Waid and Jerry Ordway, and it’s a masterclass in how to tell an engaging, attractive story in a single issue.

We open on action, with Jay Garrick showing up in Gotham to aid Batman against a killer android. Turns out said android has killed an old colleague of Jay’s while furthering a scheme by Penguin and TO Morrow. Said baddies send improved androids, dressed up as samurais, to take down the in-their-way Bruce Wayne; Bruce and Jay have a great talk about their mentoring of younger heroes; and loads more.

Samurais? Yeah, I think, so that we can have a homage to a great cover from the Sixties (mind, it wasn’t a great story, Reader-San.
This is a fun ride start to finish. It gives us action, it gives us characterisation, it’s fun – and so what if it’s not changing the DCU forever? It’s one of the best reads this month.

One thought on “The Brave and the Bold 13”