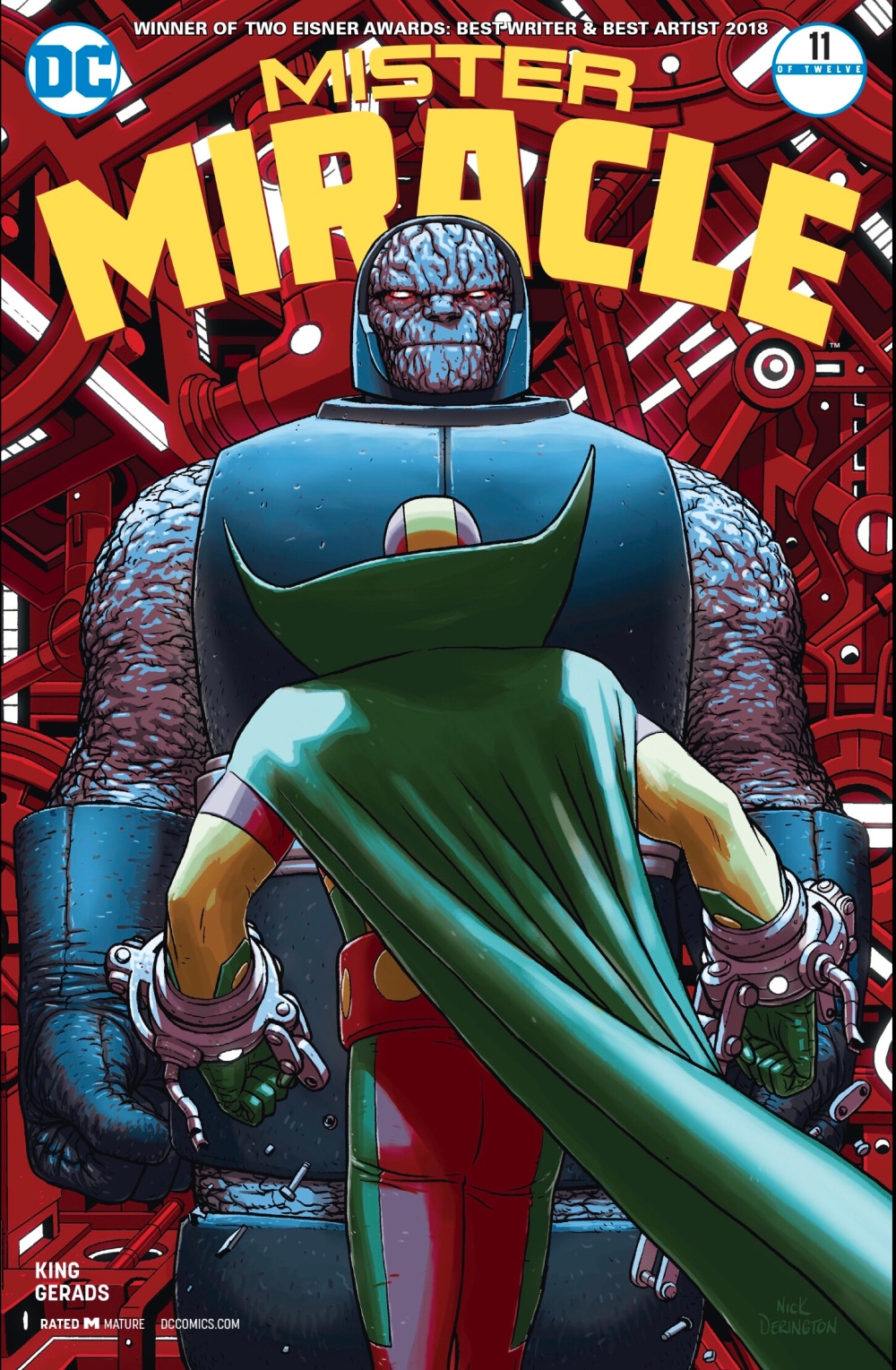 It’s the day Scott and Barda Free have dreaded. The day they’re handing over baby son Jacob to Darkseid in exchange for an end to a war that’s killing billions.

To a strictly rational mind, the bargain makes sense. But Mr Miracle and Big Barda are the most human of New Gods. They’ve agonised over their choice, and this could prove the worst day of their lives, lives that haven’t lacked in tragedy.

Scott Free himself survived a similar situation after his father, Highfather of New Genesis, handed him over to be raised on Apokolips. But before he escaped to become Mr Miracle, every day of his life was a living hell. What horrors lie in store for ‘Jakie’?

The tray of vegetables don’t seem to be going down too well with Darkseid, who doesn’t say a word. He has his lackey, Scott’s ‘Uncle Desaad’, do the talking.

Darkseid keeps his end of the bargain, giving up his access to the all-powerful Anti-Life Equation in grisly style. As the time comes to leave his son behind, Scott finds the words to say goodbye.

Will Jakie stay on Apokolips, with Kalibak to cuddle and the Female Furies his babysitters? Or do Barda and Scott have a cunning plan? That, dear reader, is the second half of this penultimate installment.

Cards on the table, I’ve not been as vocally enthusiastic about this maxi-series as many people. I’ve appreciated the incredible craft of writer Tom King and artist Mitch Gerads, and found the story intriguing – but not always compelling. I’ve left some issues lying for weeks before reading them, previous chapters having left me feeling mildly depressed, as if each came with a bag of ennui.

This issue, though, had me gripped throughout. From the relatable banality of preparing to visit the worst Grandpa ever to the poignancy of Scott’s farewell to the highs and lows that come after, this is a brilliant read. Scott and Barda aren’t perfect, but they’re the perfect comics couple – as funny as they’re dangerous, wonderful four-colour company. King and Gerads have mastered the nine-panel grid, using it not to lazily evoke acknowledged classics but to make their own story sing. The grid can contain moments, making us focus; it can also expand them, spreading a scene between three panels. One sequence here, with ‘Master Miracle’ Jakie crawling towards his father, is a model of the form, the grid enabling dramatic beats.

And when the grid gives way to a big image… wow!

Darkseid nibbling on a carrot doesn’t take away from the epic drama, it builds towards it; his creator, Jack Kirby, wasn’t averse to posing the evil god in a suburban chair, contrasting his immense power with the everyday.

King’s dialogue – lettered by the ever-excellent Clayton Cowles – is spot-on for the story he’s telling; his characters say just enough to move things along, with space left for ambiguity. And the bookending narration, emulating Kirby’s bombastic voice, is a nice reminder of where we’ve come from. As for the overall story, the arrival of a familiar face towards the end points towards an explanation for the occasional fuzzy panel this series has offered up (heck, Gerads’ excellent alternate cover provides one more example). 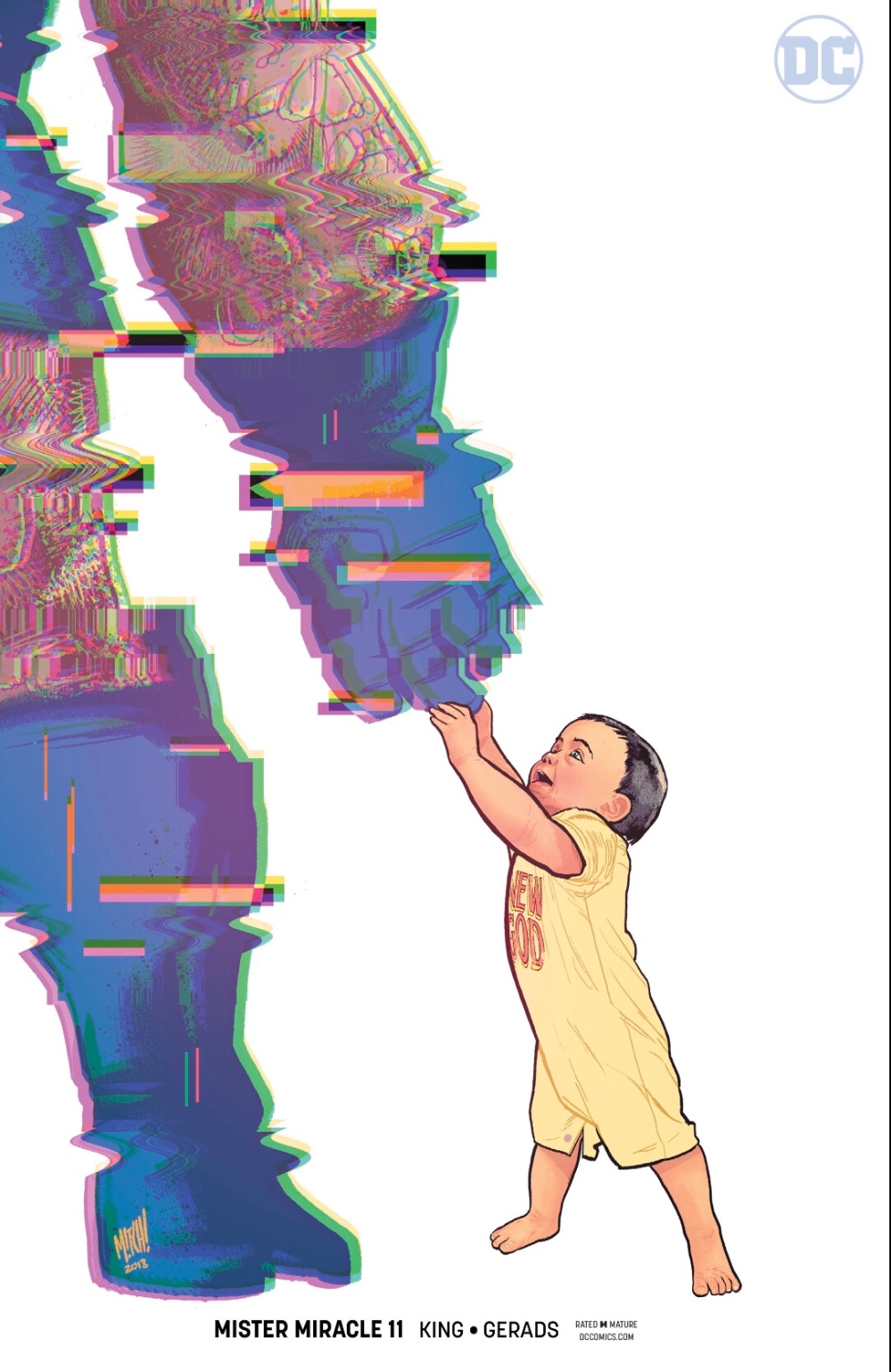 It’s hard to find fault with this issue. The opening page nod to King’s upcoming Heroes in Crisis mini, which is set to heavily feature Booster Gold and Harley Quinn, was mildly distracting, but eminently forgivable.

Nope, this is a truly great comic book, from Nick Derrington’s foreboding cover image to the quiet cliffhanger, via the well-wrought plot and subtle body language. Who cares if every issue didnt shout ‘read me now’, I kept buying and I kept reading, and I’m getting my reward.