Dick Grayson has been filling in as Batman while Bruce Wayne was a juror at the trial of Mr Freeze. Jury service over, Dick could return to Blüdhaven. 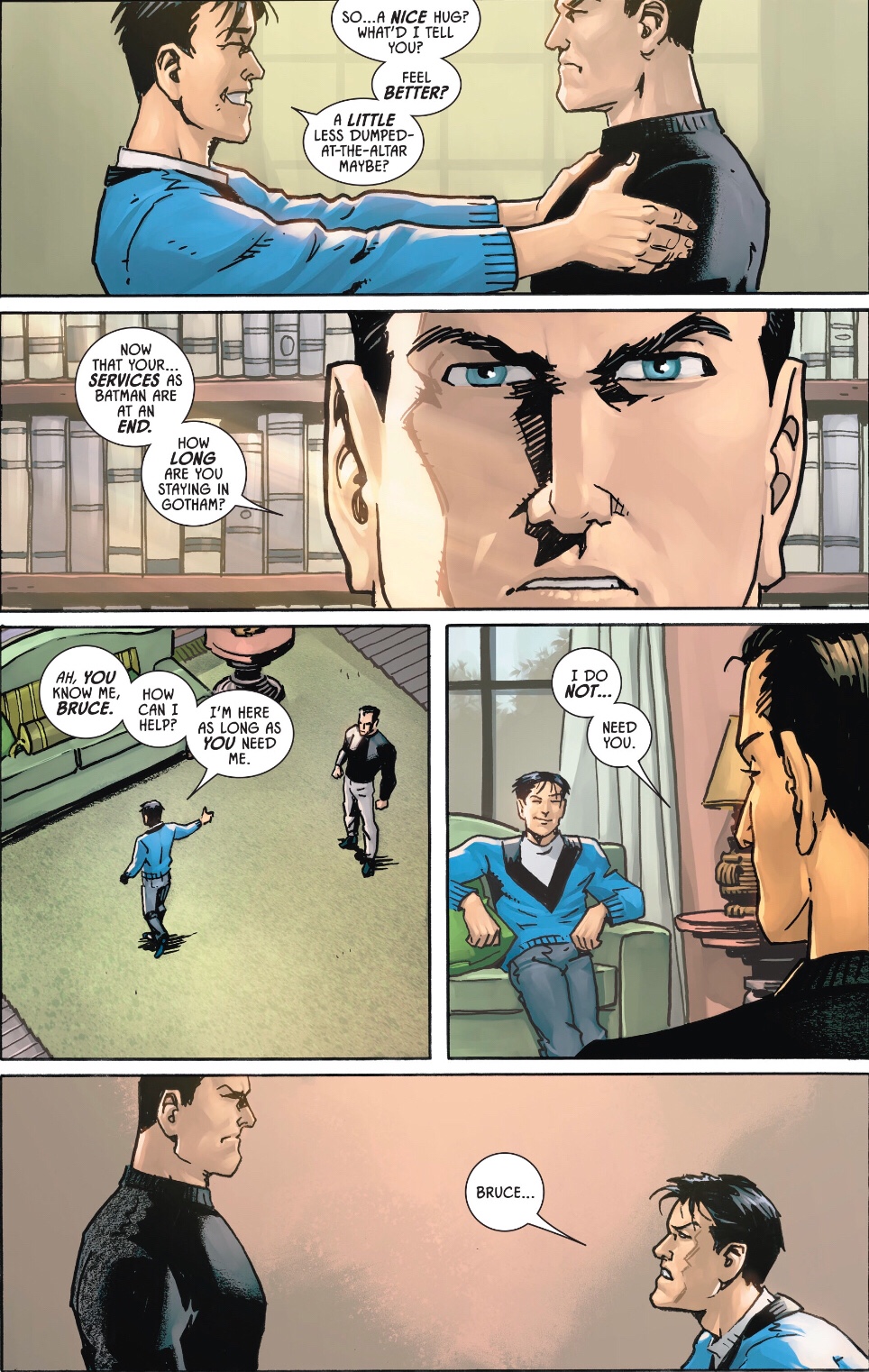 Bruce isn’t exactly full of explicit gratitude at Dick’s willingness to be there for him in the aftermath of his non-wedding to Catwoman. But neither does he banish him from ‘my city’, as he’s done to so many people, so many times.

So Batman & Nightwing, the Man Wonder, team up, just like old times. Mind, the calibre of foe on the loose doesn’t exactly require a complete set of Gotham Guardians.

When he’s not on the streets with Batman, or being fed cucumber by Alfred, Dick is remembering his early days at Wayne Manor.

Finally, Bruce responds to Dick’s unconditional, patient love, and allows his vulnerable side to show through.

This is, to say the least, a slight offering from Tom King and guest artist Matt Wagner; its 20 pages take about three minutes to read. But they’re nice minutes, reminding us that while Batman has had many Robins by his side, Dick Grayson is the original and best. As always with King, we get some good character moments.

And Matt Wagner’s illustrations fit the rough and ready Dick who joined Bruce after the murder of his parents – I especially like that he remembers Dick’s Golden Age centre parting, and gives modern Dick a version of it. And his takes on Condiment King and Crazy Quilt are lots of fun.

I do wish, though, that King didn’t have Nightwing incredulous at the very idea of Crazy Quilt, when Robin traditionally had quite the history with the colourful creep. And what’s with Dick not sure what he should remember about Crazy Quilt? Is this linked to Batman and Catwoman’s previously seen dodgy memories of their initial meetings?

Tomeu Morley’s colours are vibrant, bringing out the mood of the various scenes, and never better than on the final page, while Clayton Cowles’ lettering is wonderfully friendly.

I like the way the cover lettering for the title, Shadows of the Past, nods to the old Shadow of the Bat series logo, but the rest of the image isn’t going to go down as a classic. Wagner’s split image features a nice shot of Batman and Robin, subtly coloured by Wagner’s son Brennan, but the Batman and Nightwing section pops too much, the garish red sends the cover off-balance.

I like the variant, by Tim Sale and Brennan Wagner, less, but it’s not the colours this time, I simply don’t like the composition. You can’t win ‘em all.

This issue isn’t a must-buy, telling us nothing new about Dick and Bruce and their relationship. It does, though, boast the best use of cucumbers as a metaphor you’ll find this week.