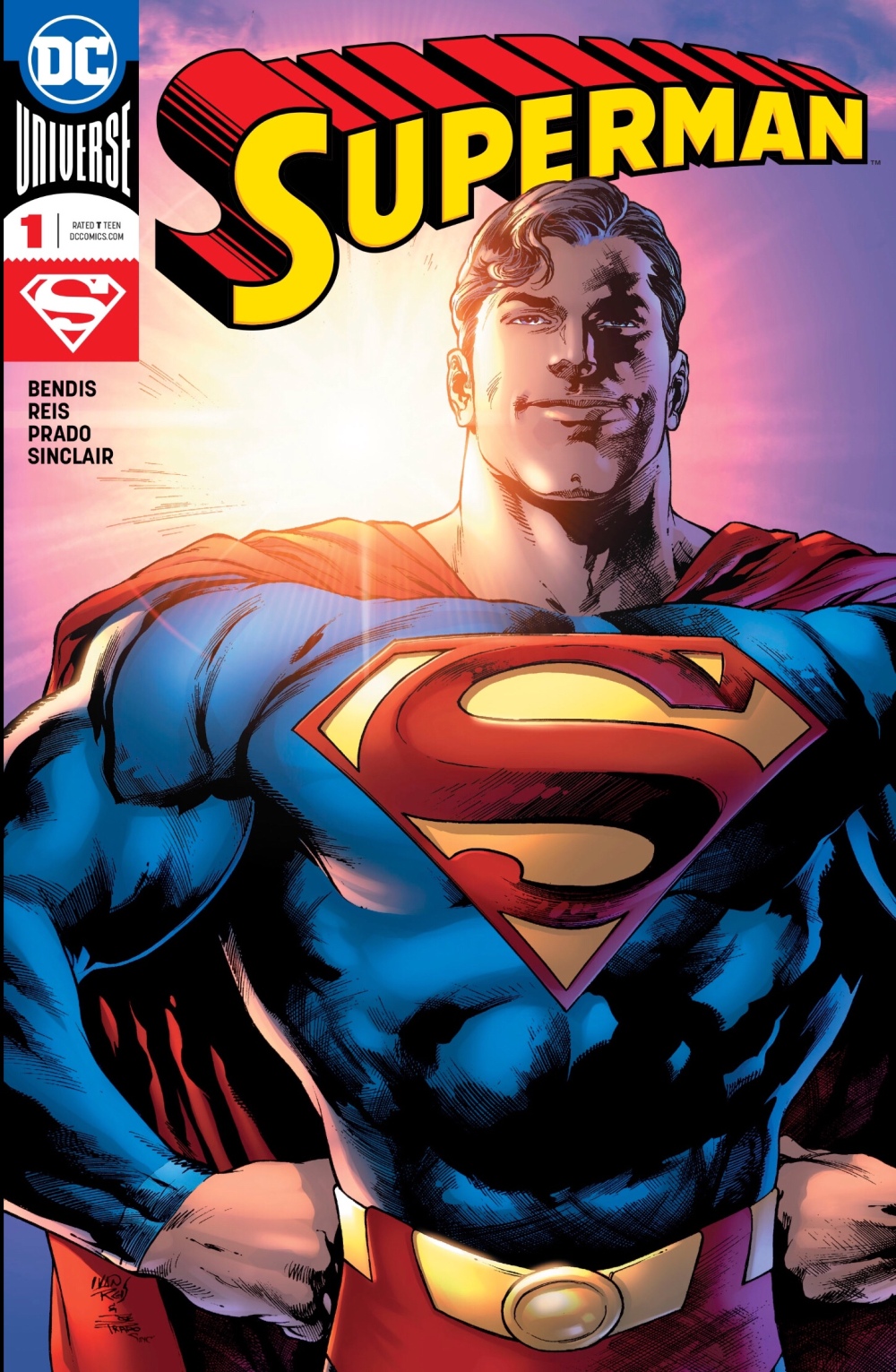 Superman has flown into space, looking for his family. Lois and Jon left with Clark’s dodgy dad Jor-El for a summer adventure, but he’s lost contact and is desperate to find them. So desperate that after a run-in with evil aliens The Dominators…

… he gives up and flies home.

Back on Earth, he sets up a new Fortress of Solitude to replace the one blown up in his recent fight with Rogol Zaar, the man who killed Kandor and claims to have destroyed Krypton.

At the Daily Planet, Clark receives a summons from J’onn J’onnz, the Martian Manhunter. He wants a little chat. Every few sentences, Clark is called away to deal with some emergency or other. Finally, though, Clark gets to hear Jonn’s suggestions.

Well, that obviously isn’t the real J’onn J’onnz, and it seems Superman has his suspicions too, although so far as we know, he doesn’t scan the figure before him to check it’s his fellow Justice Leaguer. If it does turn out to be the real thing, then Brian Michael Bendis, whose presence as new writer of the Man of Tomorrow supposedly justifies a fresh volume of Superman, gets the Martian Manhunter about as well as he does the Flash (‘I meant caca poo poo on some level’). Because the real Martian Manhunter knows that if he’s in his right mind, Superman would never deign to attempt to lead the people of Earth into some airy fairy new era, never mind take over the world. Clark sees himself as being alongside the people of Earth, not above them – time and again he’s concluded that they must make their own destiny.

J’onn would never condemn the planet as ‘garbage’. He’s not as beloved as Superman, sure; that’s partly because he chooses a form that doesn’t reflect any Earth race, and partly because he doesn’t mingle the way Clark does. Yet he’s always been shown as a fan of Earth, ready to believe the best of the people he protects. The guy shown here is truly alien, more White Martian than Green.

My other big problem is that Bendis has Superman abandon his search for Lois and Jon on a whim. One minute he’s ‘ I HAVE TO FIND MY FAMILY’ and the next it’s a case of Earth, which has a zillion superheroes, needing him more than his wife and child, who are in the hands of a version of his father who is, to say the least, deeply unstable.

Plus, Bendis has Clark come out with stupid statements.

No, you do not. Lois is a truly formidable person, but she’s not super-powered; on Earth she’s needed rescuing by him hundreds of times, and in space the dangers are magnified many times. She needs him, and Jon needs him and, just as importantly, he needs them. Look at how Clark mopes in a couple of nicely done flashback scenes. 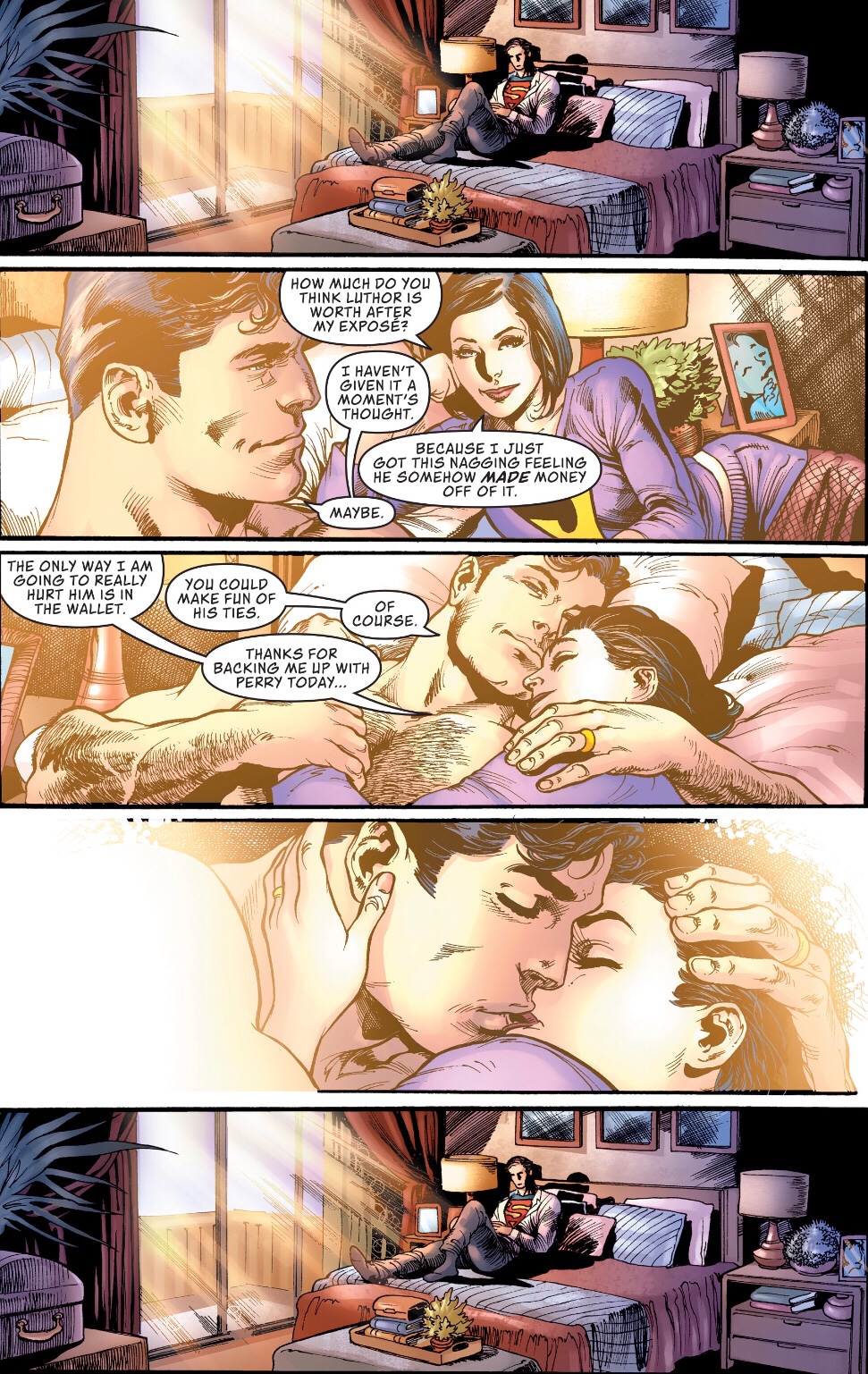 Is Superman really so Earth-centric that he can’t fathom that the Dominators could be up to anything, going anywhere? Earth is, literally, a long way from being threatened, but there he is, possibly killing people. And what does he mean, they’ll wonder how their invasion was stopped? He’s right there in their faces – unless he’s actually killing every last Dominator before they can send a signal home.

I like that Bendis prefers a gentle Superman, as seen in the exchanges with J’onn, but he should never be so ‘nice’ that he’d not properly challenge a friend who suggests he, er, takes over the world.

Earlier in the issue, Clark is looking for a chance to change into his uniform. 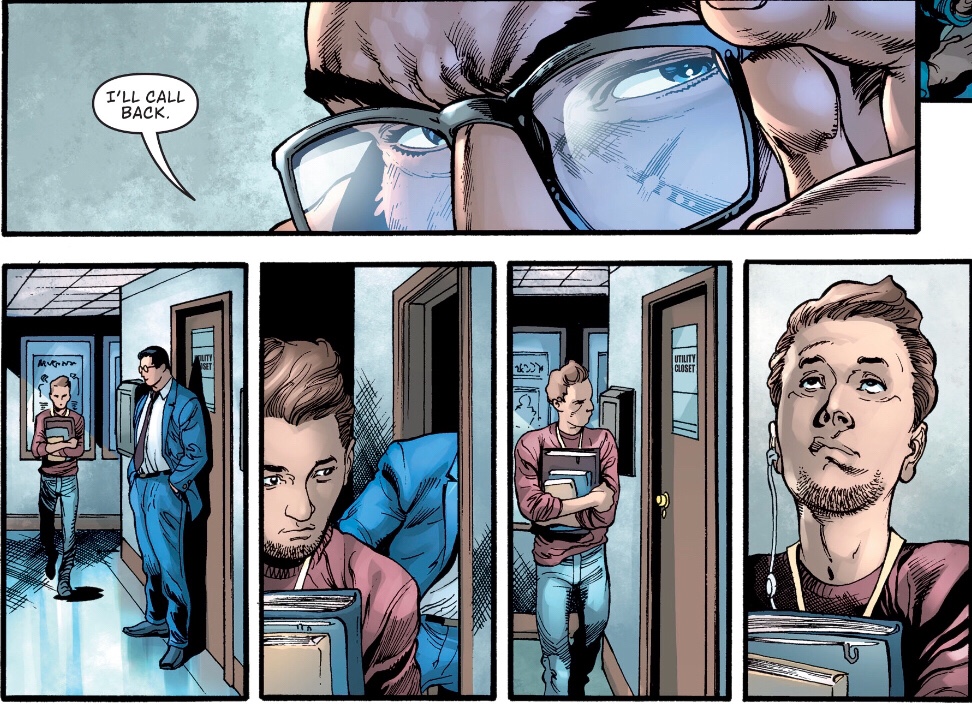 What are we to make of this? Does the unnamed kid know Clark is Superman, hence he’s looking upwards as our hero, presumably, leaves the building?

The new Fortress of Solitude skews towards the cinema version, all boring icy spikes. Still, the classic will be back at some point. Talking of the Fortress, I could have done without this joke.

Too self-indulgent by half from the Portland-based writer.

I liked the art team of penciller Ivan Reis and inker Joe Prado, but then I always do; they produce good-looking work, clear with strong storytelling. Superman has rarely emoted so subtly. I think this is my favourite panel.

Well, that building, popularly known as the Gherkin, is in London – how could I not like it?

The colours of Alex Sinclair and letters of Josh Reed are as good as every, helping carry the story along, and the cover by Reis, Prado and Sinclair is pleasantly cheery, if not a standout.

The first issue of a new Superman comic should feel special. This feels distinctly OK, with demerits for the waving away of the search for Lois and John, and the appalling mischaracterisation of J’onn J’onnz. I was planning on giving this series a few issues, but if the next chapter doesn’t show a big improvement, I’m probably out. No Lois, no Jon, a Superman who’s dangerously close to passive…. for this, DC cancelled the joyful, quirky Tomasi & Gleason run, and the confident, pacy Jurgens series? That’s actually a little depressing.