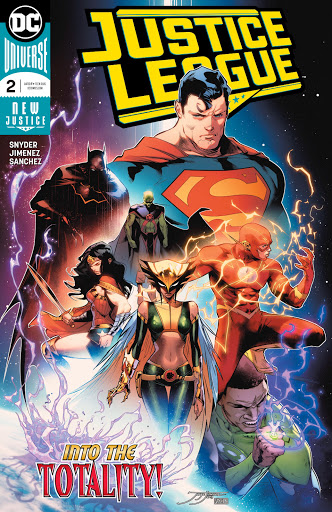 Three months ago, Lex Luthor visited a few of late father Lionel’s old mates. It didn’t go well for them, but Lex had a revelation. 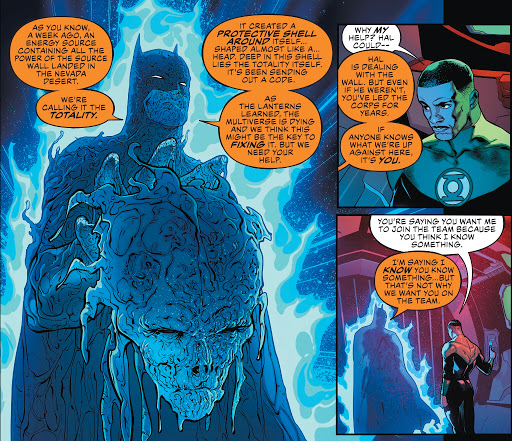 Meanwhile – literally, Batman is talking to John via a surprise guest good guy while attending to Earth-based business – outside Belle Reve prison, the members of the new Justice League are fighting a massively mutated Killer Croc. He’s been transformed by the escapee from the broken Source Wall they’re calling the Totality. While the League is up to stopping Croc’s rampage, getting to the heart of the Totality mystery is another matter altogether.

And at the new Legion of Doom’s underwater HQ, Lex Luthor is explaining his plans, plans borne of his Kansas sortie, to his fellow villains. 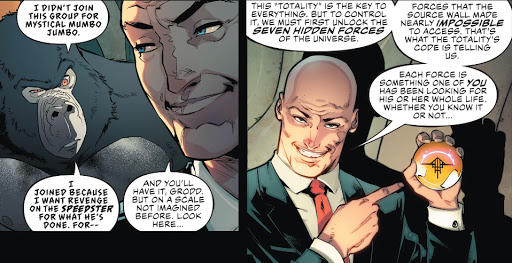 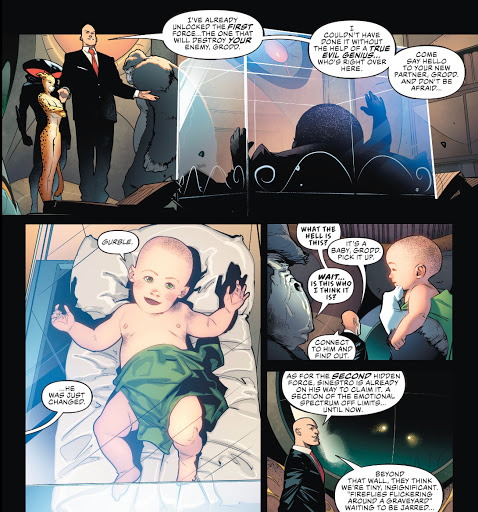 A baldie baby! Lex Luthor Jr? A cloned Lex? Probably not – what this band of evildoers needs are more counterparts to the Leaguers. We have Aquaman, Superman, Flash, Wonder Woman, Green Lantern and Batman villains, but what about Hawkgirl and Martian Manhunter? Might the child be a baby Byth or a cuddly Commander Blanx? Colour me intrigued.

The baby is just one treat in this superb second issue from writer Scott Snyder, artist Jorge Jimenez and friends. There’s also that mystery hero in space I mentioned, reminding us that the cameoing character isn’t as firmly planted on Earth as he may seem. We get a villain returning to their Silver Age look and John Stewart receiving enormous respect at the very moment he needs a little succour. And much, much more: this comic is teeming with great character moments along with the crazy, yet coherent, overall plot set up by Snyder – what is the Totality and what does it mean for Earth? Green Lantern Hal Jordan has learned that the Multiverse is likely to be destroyed in a year’s time, can the League unravel and harness the cosmic traveller’s secret code to somehow save, well, everything?

The Lex sequence is a terrific opening to the issue, announcing that the wannabe hero of DC Rebirth hasn’t just left the building, he’s blown the whole darn thing up. It’s not the only splendid sequence though, I love this moment showing J’onn J’onnz’ wisdom. 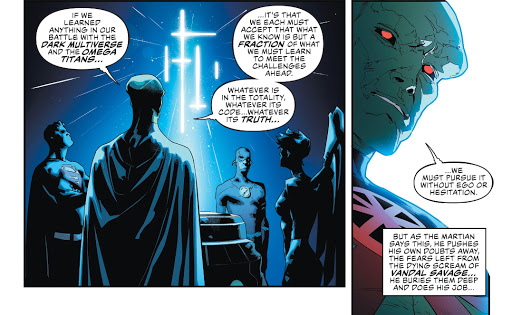 The dialogue is terrific throughout, lending distinctiveness to the heroes and villains. One thing I’m especially enjoying is that Snyder has gone old school with his storytelling, giving us an omniscient third person narrator who pops up occasionally to explain, underline, maybe tease… they get positively gleeful at the end. I like the tone a lot and hope Snyder sticks with it.

Likewise, I hope Jorge Jimenez sticks around on the art. Jim Cheung was the big name on the first issue, and I think he’s back for #6, but for my mind I’d have been thrilled with Jimenez from beginning to end. His storytelling is first rate, while his character designs are always a delight. Here, J’onn gets a tweak, he’s skinnier than is usually the case, making him stand out even more than a massive green Martian would. As seen in Jimenez’ Super Sons run, his art has a rare combination of liquidity and strength which just looks exciting on the page. And even though we see the Totality’s Earth appearance early in the issue, when it shows up for real it’s properly awesome.

Partnering Jimenez is colourist Alexander Sanchez, whose blazing blend of hues keeps the pages popping without ever giving us a headache. How team book colourists manage to find background tones that complement, rather than clash with, the foreground characters is a mystery worthy of the League, but manage it Sanchez does. I hope DC has this chap on standby for the inevitable return of the Legion of Super-Heroes… On the lettering side, Tom Napolitano eschews the faffy fonts so fashionable today, keeping things clear, but stylish.

The cover by Jimenez and Sanchez is lovely, and could easily have gone on last issue’s debut edition. More of this kind of thing! 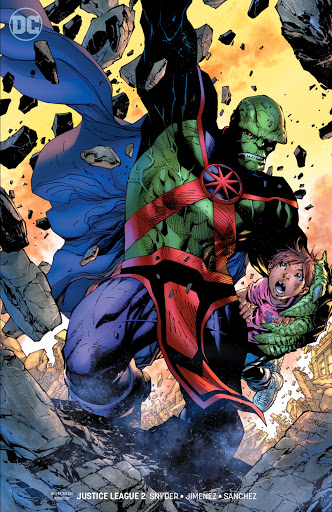 There’s also a variant by Jim Lee, Scott Williams and Alex Sinclair and it’s a powerful piece, but could J’onn please lose the daft loincloth? No, no, I don’t want him flashing his Martian Manhood, give the guy his trunks back. If they’re good enough for Superman…