Berenice lives with boyfriend Nathan in the old, dark house he’s inherited. While Nathan is struggling to write a book, Berenice spends her days exploring the property. She finds it oppressive, so is glad it get away to an antiques fair with friend Sam. On their return, she sees something. 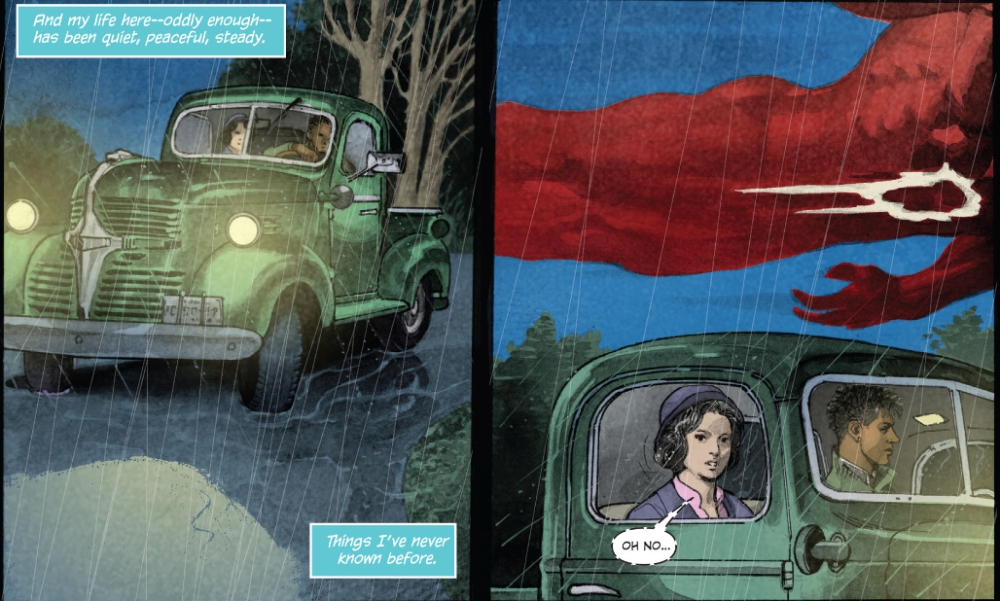 She doesn’t know Deadman, but she does know there’s something wrong with the house. Deadman – murdered circus aerialist Boston Brand – tries to possess Sam to communicate with Berenice.

He does manage to touch Berenice and as she briefly leaves the waking world, we see a little of her past. It seems she’s always been able to see ghosts. It unnerves her a little, but doesn’t worry her greatly. But her encounters are becoming ever more unsettling.

As it turns out, Boston doesn’t need to possess anybody to talk to Berenice, her gifts mean they can talk like any two people. And Berenice has words with Boston.

But they come to an understanding.
As for what happens next, I say read the comic. If you’ve not got room in the budget for it right now, ask someone to get you the inevitable trade as a gift. Just don’t miss this gorgeous opener, which elegantly takes Deadman from his usual milieu of questing superheroics to the gothic romance genre.
The 48 pages of story are split between two narrators, first Berenice, then Boston. I’d have expected Deadman to get first shot at telling the tale, but writer Sarah Vaughn’s choice pays off; we get to know Berenice before things get deeply weird, with Deadman introduced as an aspect of the Uncanny.
Initially, to Berenice, he’s just another of the spirits she occasionally sees, even as she notices he’s not, so far as a ghost can be, mundane. 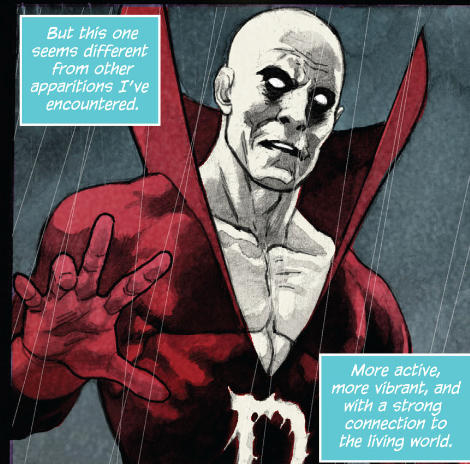 And when Deadman takes over, it’s the return of an old friend – Vaughn gets Boston; he’s a good man, by now used to his strange state of being, who never shies away from the chance to help people.

And while Berenice has a point in that entering people without their permission is a form of violation, his viewpoint makes sense.
Nathan is Berenice’s boyfriend, but it’s hard to miss the mutual attraction with Sam and I like that Vaughn keeps things low-key so far as a particular revelation is concerned. Actually, ‘revelation’ is overdramatic, there’s a detail I failed to catch, and when it’s lampshaded, it only enriches the story.
Lan Medina’s illustrations, coloured by José Villarrubia, are just gorgeous. The athletic Deadman apart, the characters have realistic body types – they move naturally across the page, their normalcy grounding the spookiness. As for the darker moments, the artists nail them too, locating the house somewhere between terrifying and beguiling. Deadman himself is classic Neal Adams rather then the corpse-like Kelley Jones version, and it’s more to my taste, with Medina capturing Boston’s nobility along with his inevitable loneliness. I’ve not seen a lovelier comic this year – the feel reminds me of the work of Gene Colan and Tom Ziuko on DC’s long-ago Nathaniel Dusk series, a huge compliment.
Comics veteran Janice Chiang was a nice surprise in the credit box, and her confident lettering is a big plus for the book – I especially like the narrative fonts, with Berenice in tentative lower case, Boston in showier upper, and colours reflecting their characters.
The cover illustration by Stephanie Hans is sumptuous, evoking the gothic romance genre once so popular it prompted DC to publish a book entitled Dark Mansion of Forbidden Love.

Based on this wonderful first issue, this three-part prestige series looks set to be a terrific tribute to that run, as one of DC’s most popular cult characters teams up with a fascinating new player to solve a mystery involving a spooky house, a beautiful ghost and a woman trying to find her place in the world. Don’t miss it.

One thought on “Deadman: Dark Mansion of Forbidden Love #1 review”