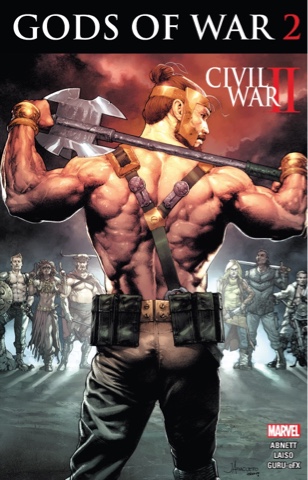 The last time I reviewed an issue of Hercules I assumed it was the final number, but no, writer Dan Abnett was allowed to continue his story almost immediately in this renamed mini-series. So I was made an ass, but I couldn’t be happier and heck, man to donkey is a very Classical transformation and Gods of War is all about the ancient deities. To be specific, minor deities and demi-gods.
If you missed Herc’s last shortlived run, it saw him living in New York’s Astoria district, and hanging out with fellow hero Gilgamesh as he tried to repair his reputation after millennia of carousing. The threat of the Rising Storm – a gang of violent upstart gods out to do away with the the old gods – made themselves known
In the first issue of this tenuous tie-in to Marvel’s current event, Hercules tried to get his old Avengers teammates to join him in the fight. But they’re distracted by the latest superhero Civil War, and have lately been thinking of the Lion of Olympus as only slightly more impressive than D-Man. So Hercules must look further afield for help, and who better to fight new gods than old gods? He already has Gilgamesh, Tiresius the seer and Stone Age goddess Ire on side.
Enter Theseus, Beowulf, Lorelei and Sigurd. The latter pair appeared recently in Loki, Agent of Asgard, but I’ve not come across Marvel’s versions of Theseus or Beowulf previously; doubtless they’ve been in Thor or Eternals or somewhere, but I’d be surprised were they as entertaining there as they are here. 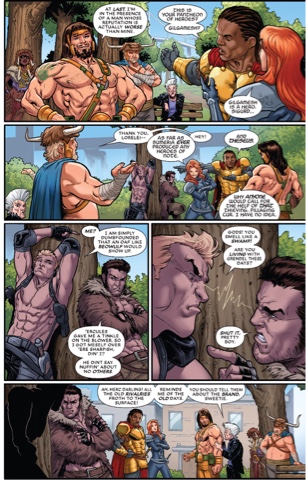 Those guys are so going to be having a god-snog.
As for Lorelei and Sigurd, they get a wonderful introduction to the book. 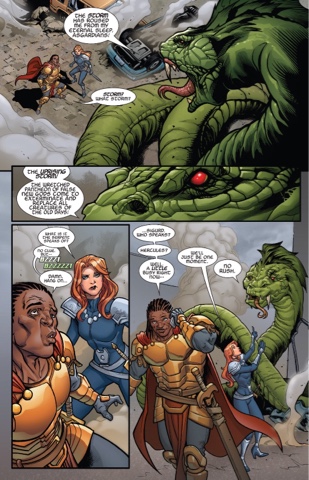 It’s almost too light-hearted, but when you’re an Asgardian or a dragon, fighting the the same foes again and again, and pretty much guaranteed to return for a new cycle of myth should you die, why would you take everything seriously?

Hercules himself has his trademark bluster, but he recognises a crisis and fully intends to handle it or go down swinging.
By the end of the issue, we’re tying into Civil War a tad more than I’d like, but Abnett never fails to please with his big fight scenes, dropping insightful character moments along the way. 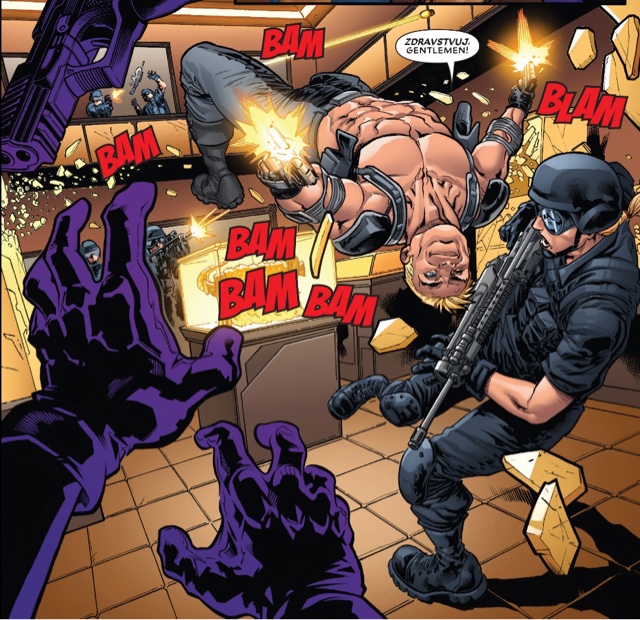 Emilio Laiso’s art has an appealing chunkiness to it, characters such as Theseus look like they’re cut from rock – yet the facial expressions ensure they’re as human as you or me. His layouts are dynamic, with some really sharp fight scenes, and Guru-eFX adds extra depth and interest with well-chosen colours. Joe Sabino handles the various god-fonts with style and gives the clever title, Brand Recognition (read the issue to find out why that’s so appropriate), a nice treatment.
The cover by illustrator Jay Anacleto and colourist Romulo Fajardo Jr is a cracker, giving Hercules proper godly magnificence. OK, the horrible manbun (and isn’t that a tautological phrase?) is still around, but it’s an arresting image, complete with a few of the godly gang.
If you’re an events completist, you’re likely buying this series anyway, but if you’re as weary of constant crossovers as me and want something a bit more self-contained, something effortlessly entertaining, give Gods of War a try.