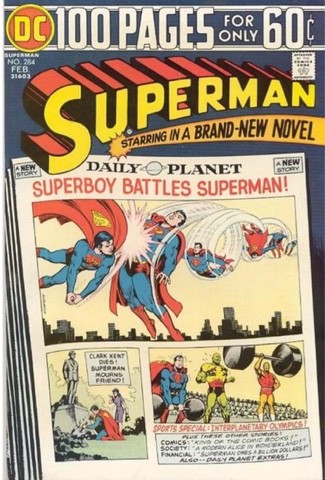 I was 10 when this issue appeared in late 1974 and while I was buying every DC superhero comic I could find – they were so cheap back then, 9p for a regular issue – the Super-Spectaculars didn’t always show up in UK shops. So it’s only now, thanks to eBay, that I get to read this mainly reprint giant. The reprints include a few really old tales, Seventies DC having finally cast off the received wisdom that modern kids would turn their nose up at Golden Age stuff; as it happened, we loved ’em.
But the delightful likes of ‘A modern Alice in Wonderland’ and ‘King of the comic books’ aren’t what I’m looking at today, let’s focus on the book’s new ‘novel’. The Nick Cardy cover is typically nice, but it drops rather a big hint about the story – there’s a mystery to solve, and Superboy? Big clue. Mind, the surprisingly moody splash page is almost an equal offender. 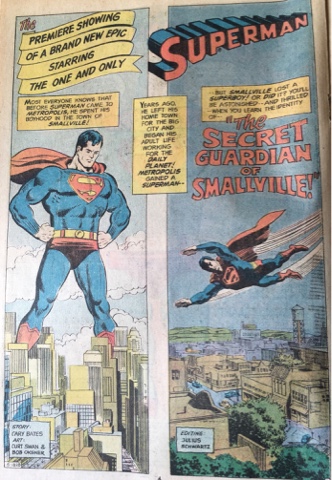 We begin with Clark Kent getting a call from old pal Pete Ross, whom readers know, but Clark doesn’t, discovered his secret identity when they were on a very wet camping trip as kids. 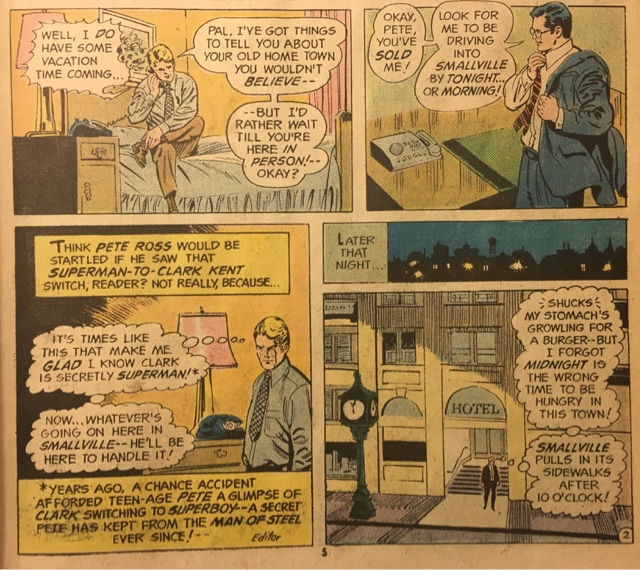 While waiting for Clark to arrive, Pete is startled when Mother Nature makes herself known. Happily, a familiar figure – well, shape – shows up to help. 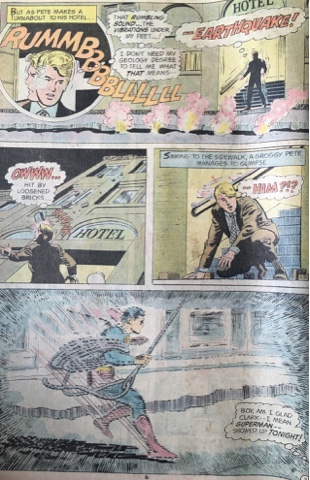 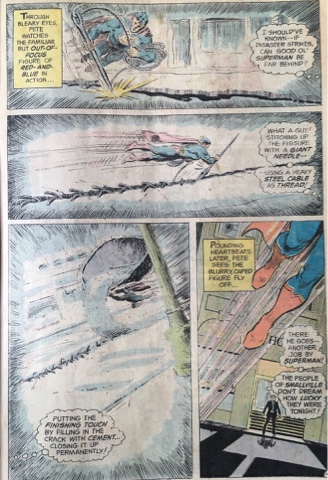 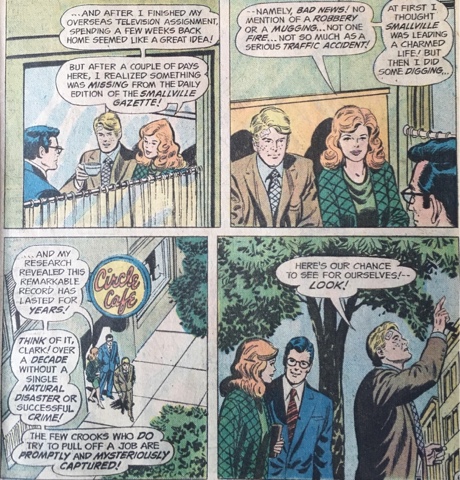 Lana loves a mystery, and who better to help her solve it than a fellow investigative journalist and, er, geologist. I reckon she was feeling sentimental.
When an emergency arises requiring Clark’s super-powered side, Pete decides to help. 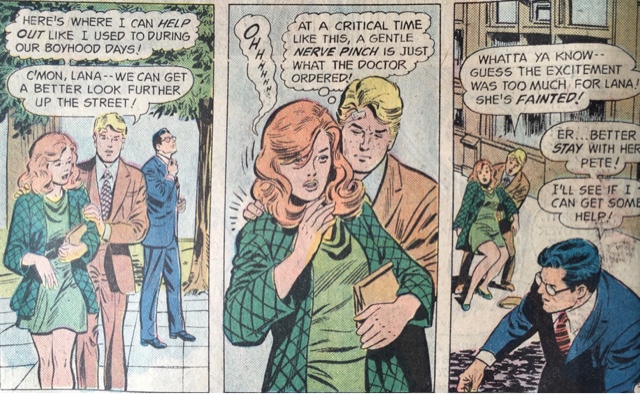 Ouch. Is Pete Ross a Vulcan?
Crooks have blown a hole in the roof of the Smallville Bank, and they proceed to grab the safe via giant magnet attached to a helicopter. Superman goes after the chopper but is waylaid by a strange figure and tossed far, far into space. By the time he returns to his hometown, we’ve seen the fuzzy figure tie up the case… literally. 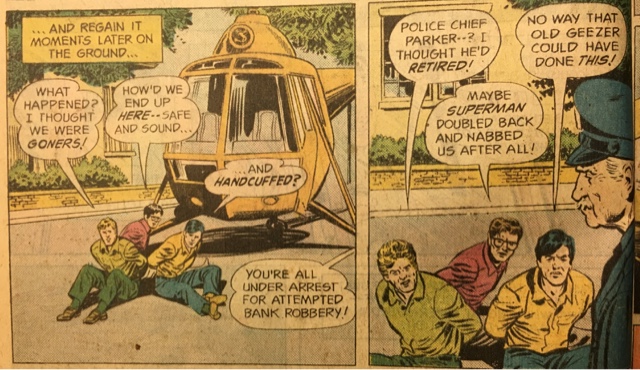 Having a hunch, Pete sneaks into the old Kent homestead – Clark never sold it – and meets the mystery hero.

But why operate in secret? It turns out that the Superboy robot has a sad tale to tell. 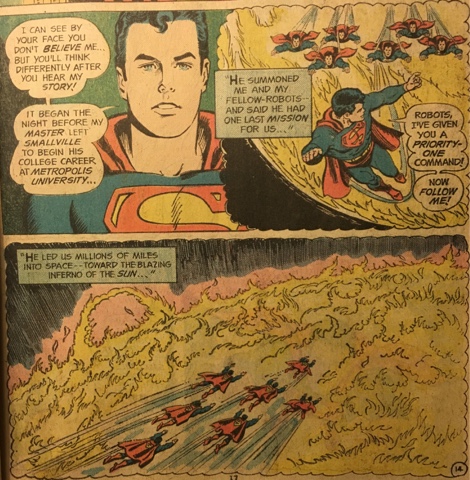 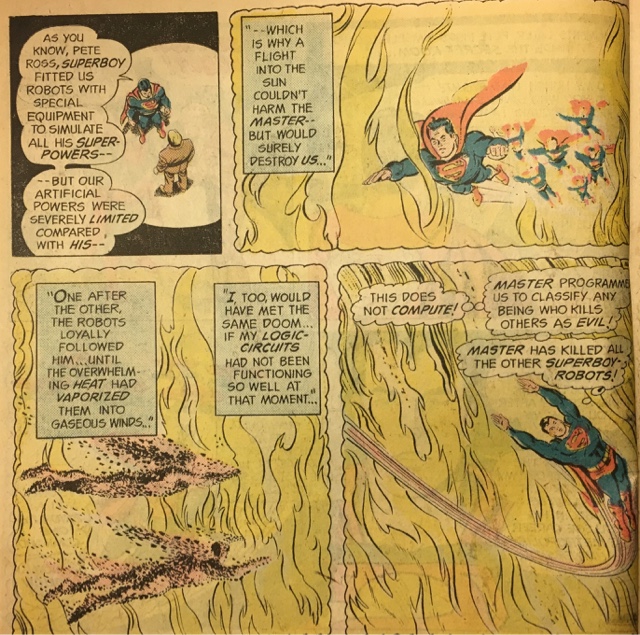 The poor guys. This is horrific! The robot reached a most reasonable conclusion.

After telling Pete his tale, the robot receives an alert, there’s a new emergency. But he’s been set up by Superman. They fight, and Superman doesn’t find the tussle as one-sided as he’d expected. The robot – ‘Superboy Robot-6, we now know – punches Superman right out of town. 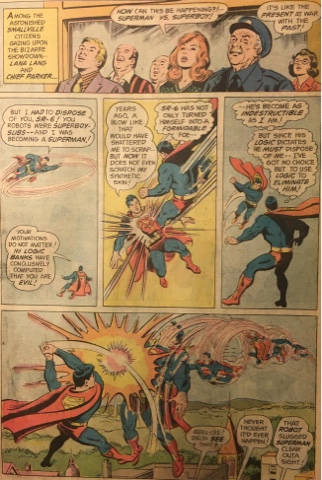 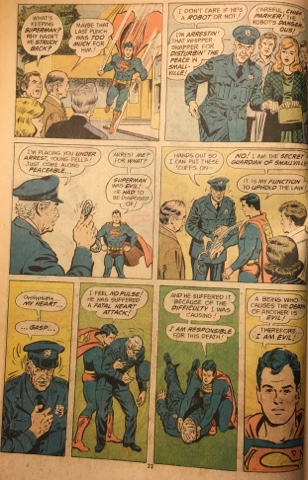 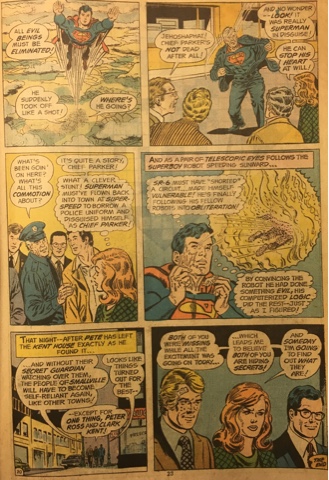 So it’s goodbye to Superboy Robot-6, the Secret Guardian of Smallville. Chalk up another win to the Man of Steel. Hurrah, he’s tricked a sentient being who once trusted him to commit cyber-suicide, meaning crooks can once again rob blithely in the town that raised him.
Well done Superman.
I really rate the art by Curt Swan and Bob Oksner, the action is joyful and the depiction of emotions – on people and robot – have a subtlety rarely seen. The sadness on the robot’s face, above, when he realises his master is ‘evil’. And that moment we first see Lana – she wasn’t a regular cast member back then – is beautifully done. 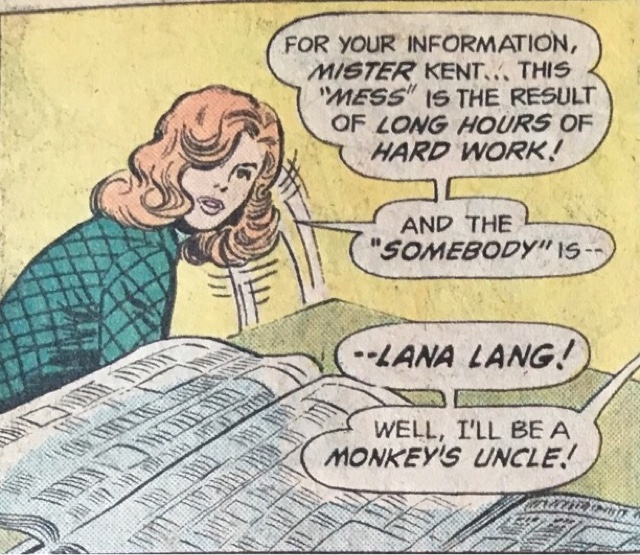 I like the basic story set-up but WHAT THE HELL WERE YOU THINKING, CARY BATES? Almost-Superman couldn’t simply switch off his robots? Or send them to towns around the world to help people until they wore out? Confronted by his obvious bad judgment years later, the supposedly more mature Superman couldn’t thank Superboy Robot-6 and help him find his own identity as an independent hero? Heck, Bates could at least have put the other side of the argument, used Pete, Lana or one of the many people Superboy Robot-6 saved over the years to question his bulldozer approach. But no, they’re just robots, to be used and then sent to their destruction, like trusting puppies on that final trip to the vet.
I’d love to read the lettercol responding to this issue; I cannot believe readers of the time would side with the Man of Steel. Does anyone have access to, presumably, Superman #288?
And I know I’m not the only, shall we say, veteran reader around here. Did anyone read this book as a kid? Did you believe Superman was right to shut down The Secret Guardian of Smallville?
UPDATE! And thanks to the kindness of Godzylla, we have that very letters page – thank you! 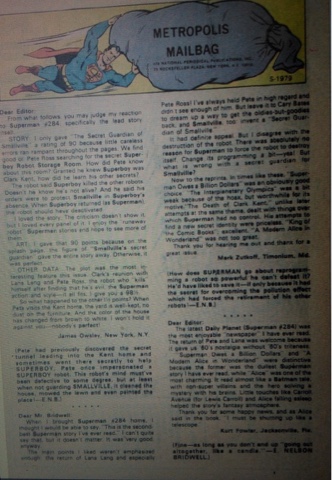