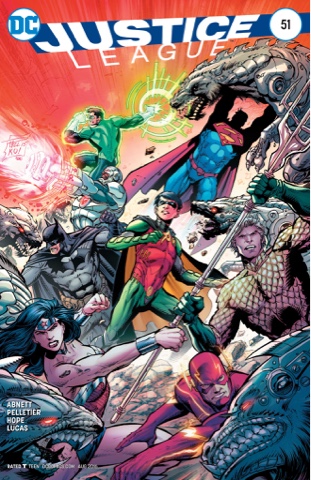 Five years ago, Justice League was a very annoying comic. Bad-tempered heroes, sound and fury signifying nothing much…. Geoff Johns’s scripts improved as the New 52 period wore on, and we were pretty much at his JSA-best by the time he left with issue #50. Now here’s #51, a fill-in written by new DC contract player Dan Abnett, set back in that early period of the team’s history… and it’s really rather wonderful.
The story sees the team living in Fortean times, dealing with dangerous anomalies from across time and space. Techno-organic warbeasts. Monstrous supervillain Mammoth. And someone who looks a lot like Brainiac. 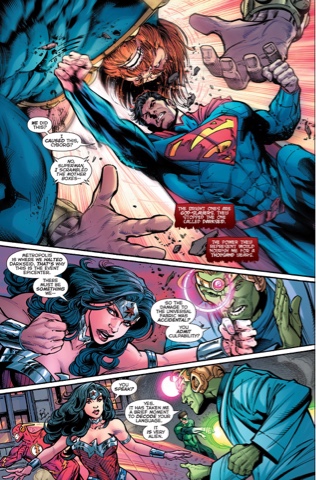 And guest-starrng we have the original Robin, who’s been brought along by Batman for reasons revealed at the end of the story
The story is intriguing, its action exciting and the characterisation… whoa! From the Crisis talk…

… through discussion of John Costantine…

… to contemplation of what it means to be a young hero among legends, it’s insightful work from Abnett. 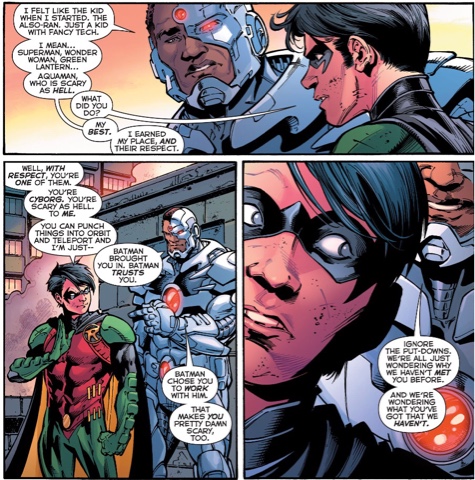 And the irony of Barry Allen laughing at Batman, having forgotten all about Wally West, is delicious. 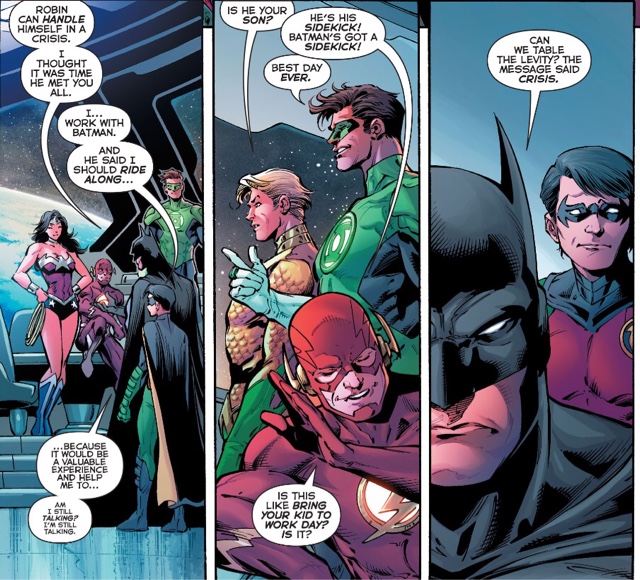 Abnett ties the story into his recent Titans Hunt series in a manner that’s as intriguing as it is satisfying.
The campaign to get Abnett regularly writing a Justice League book starts here.
And if someone could see fit to have Paul Pelletier join Abnett as penciller, marvellous – the man is truly skilled at choreographing a superhero comic, and his knack for a telling expression goes under-praised. Inker Sandra Hope brings her patented strong line to proceedings, while Adriano Lucas supplies the vibrant colours and Carlos M Mangual the super-sharp letters.
Lucas colours Pelletier’s enjoyably busy cover, which is inked by Tony Kordos, a new name to me. It’s a good job all round, but why no cover copy to further excite potential readers?
If you want a nice done-in-one JLA with bonus ties to the DC Universe in both directions, don’t miss this issue.