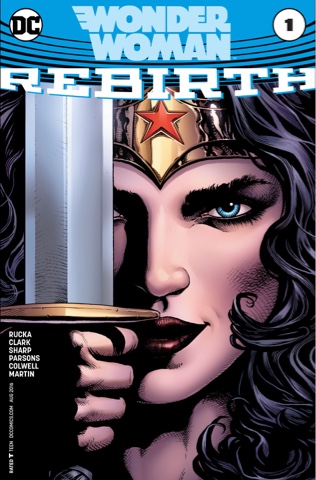 We’ve all had days when we don’t know who we are anymore. But for Diana, this is the literal truth. A truth about falsehoods – she’s remembering conflicting stories about her past.
Was she made from clay? Or is she the daughter of Zeus.
How can she be god of war? 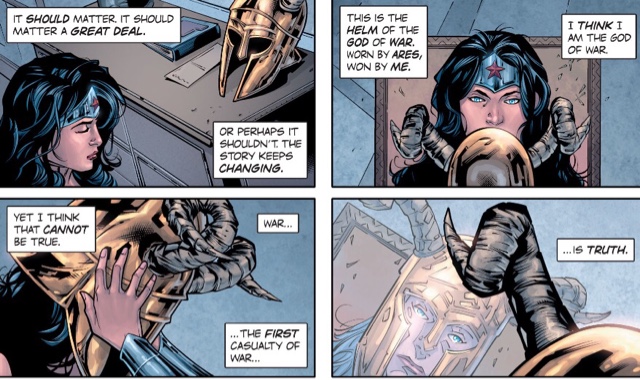 What were the circumstances in which she met Steve Trevor?
Did she really have a romance with Superman?
While it may not matter who you are, it’s how you move forward, if you can’t be sure of who you were to begin with you’re on shaky ground. So Diana goes to Olympus to find answers, and simply confronts more mysteries.
To say this first issue by the returning Greg Rucka – he wrote Diana for a few years a continuity or two ago – intrigued me would be an understatement. He directly confronts the contradictions that descended on Diana with the New 52, the changes to her background brought in by Brian Azzarello and Cliff Chiang that pleased newer readers, while driving many longtime fans away.
I’m one of the latter, and so am delighted by the notion that such things as Diana’s Amazon sisters being basically rapists looks set to be thrown out. That the fighter for peace will likely no longer be the god of war. That Steve Trevor looks set to meet her in her own book again.
And if these things come via a rollicking adventure, packed with mythology, mayhem and musings on what it means to be Wonder Woman, so much the better. Rucka gets things off to a great start here, putting Diana front and centre with no one else to distract. He’s taking account of her recent history while resetting it, and with it, her voice. And for the first time in years, the wisdom is back.
The only moment that doesn’t work for me is this page. 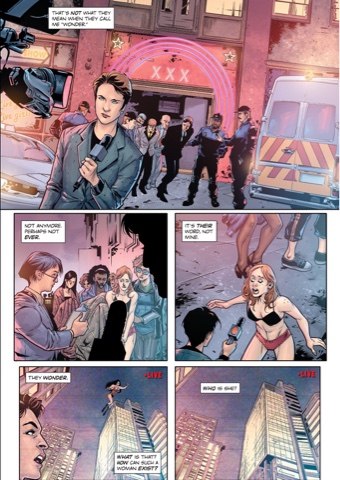 It’s clever, but more an old fan joke that something I can see Diana – even a confused one – believing.
One thing that did surprise me was this. 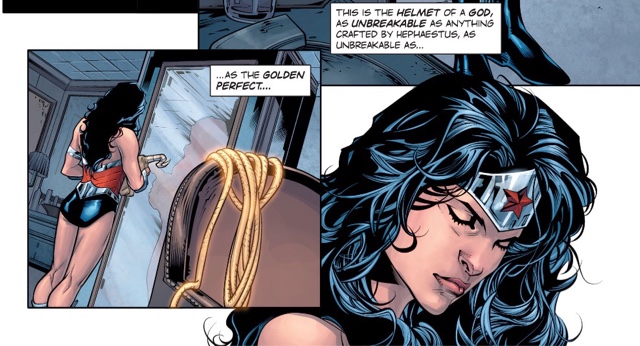 Blimey, that’s a deep cut, a reference to a Joe Kelly-written JLA story that annoyed me by using two adjectives to act as a noun. The Golden Perfect… that’s up there with calling a super-team The Ultimates. Still, minor thing, and it shows Rucka’s deep knowledge of Diana’s past. But next time, just ‘lasso’, huh?
Two thirds of the book are pencilled by Matthew Clark, an old favourite from his runs on Superman, Doom Patrol and indeed, Wonder Woman. The pages are inked by Sean Parsons and coloured by Jeremy Colwell, and are mostly solid, without being spectacular. 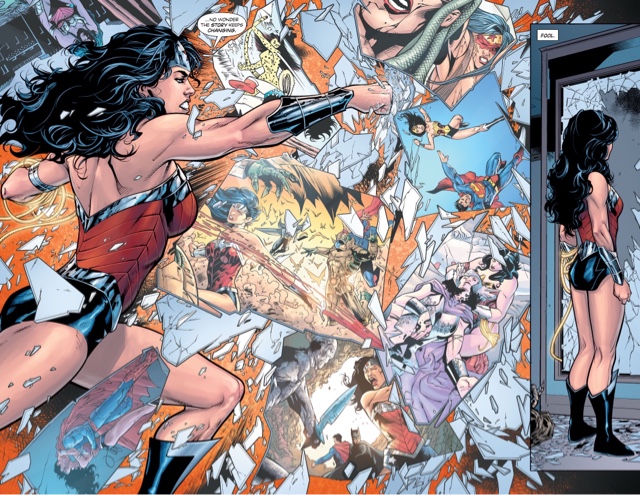 The biggest moment, as a smashed mirror reflects shards of Diana’s conflicting past – including Rucka’s gorgon storyline – really show what Clark can do, his enthusiasm for Diana finally unfettered.
And when Liam Sharp arrives at a key point in the issue, giving us full illustrations coloured by Laura Martin, the pages get consistently eye-catching. It helps that Sharp gets a wilder landscape and a fantasy action scene, but there’s something innately right about Sharp and Diana. 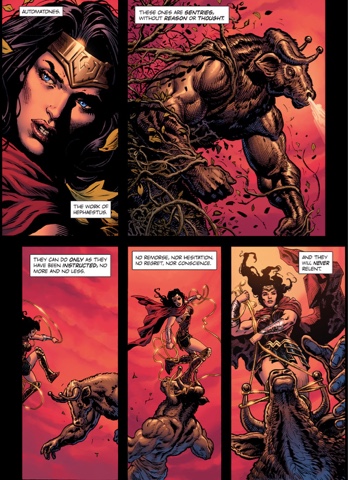 There’s love in every line, and I can’t wait to see how his run on the coming regular Wonder Woman series – alternating with the sublime Nicola Scott – pans out.
Of course, the big headline is Diana’s new costume… it’s not the Silver or Bronze Age look I grew up with, but if we have to have a warrior style, I’ll take it. The kilt works, the colours are brighter than the dull New 52 outfit, the cape is regal. Yeah, that’ll do for awhile.
A nod too, to Jodi Wynne, a new name to me, for a very nice lettering job, and Dave Wielgosz, Chris Conroy and Mark Doyle for doing a lot right with the editing. Sharp and Martin’s cover is more New 52 than Rebirth, with the emphasis on the sword, but well done, and if you take it as a precursor to Stanley ‘Artgerm’ Lau’s gorgeous variant – ah, the joys of digital purchase – it makes more sense. 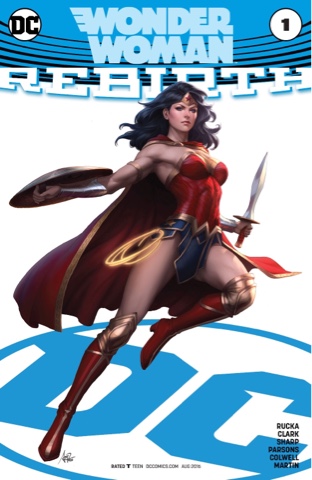 Rucka will be telling two, alternating stories in the new bi-weekly Wonder Woman series: continuing the mystery of Diana’s past in Sharp’s Year Ten chapters – hopefully it’s more than Dr Manhattan messing around, I’m holding out for Silver Age Diana baddie Time Master/Time Trapper – and looking back at Diana’s Year One with Scott. It sounds unmissable, and if the new series is as good as this scene-setter, it will be.