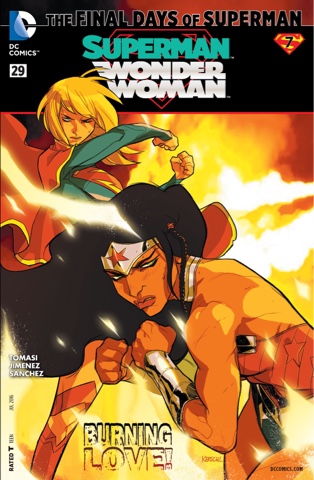 Superman, Wonder Woman and Batman have caught up with the energy avatar Superman whose combination of zeal and confusion has seen him kill people who got in his way. They need to shut him down.
In Colorado, the older Superman, strange refugee from another planet, ensconces wife Lois and son Jon in his secret fortress. He needs to know they’re safe before he can rejoin the fight against Pseudo-Superman.
Well, her name’s on the cover, but Wonder Woman here is more contract player than star performer. She gets some good licks in against the bad guy, and is a stout defender of Lois, but this is very much a Superman story. As a non-fan of the recently rekindled romance with Superman, I find it much easier to like Diana’s role here than when she’s making goo-goo eyes at Clark, or resenting him having other people he cares about.
And Lois – the younger, New 52 version – is in classic mode, protesting when Batman whisks her away from the front lines, then coolly ordering up a helicopter to take her back. As for the older Lois, she sounds as much the reporter as her younger ‘self’.

Semantics indeed!
Supergirl also has a nice wee scene, setting her up to take part in next week’s concluding chapter. And look who shows up. Yes, it’s the Danvers off the telly! I guess someone’s getting themselves adopted soon.
Writer Peter J Tomasi does a splendid job this issue, moving the story along while giving us juicy action and character moments. My favourite scene combines the two. 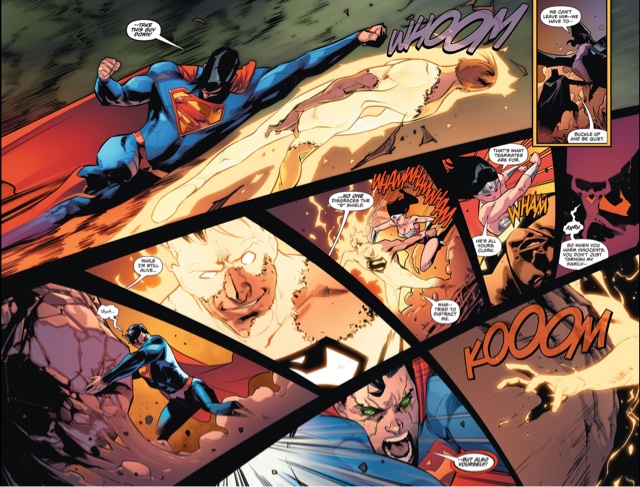 Tomasi really gets what Superman is all about. And the fact that here Diana describes themselves as ‘teammates’ rather than ‘lovers’ doesn’t hurt.
Jorge Jimenez draws Diana too much the waif, but this style may suit his upcoming Super-Sons stint, as new Superboy Jon Kent gets to know current Robin Damian Wayne. I do like the energy of Jimenez’s work, though he fails to nail the awe in a couple of scene-setting moments apparently mean to impress – the arrival at the older Superman’s fortress, and Jon and Lois’ first peek at the interior.
Colourist Alejandro Sanchez is a fresh name to me, and I like his measured tones, from the literal heat of battle to frozen Colorado.  He does, though, miscolour the older Lois’s hair, something editors Andrew Marino and Eddie Berganza should have caught and corrected. As for letterer Rob Leigh, he never disappoints.
I’m a Karl Kerschl fan, but this cover isn’t among his best work, with Diana looking distinctly crone-like.
But that’s a minor thing in the penultimate Chapter of The Final Days of Superman. Tomasi continues to up the ante and his creative collaborators don’t let him down. Roll on next week and the new status quos for our lead characters.