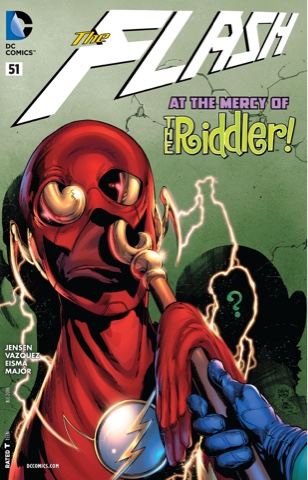 You know how you’ve not read someone’s series for awhile, but you miss that character and are really in the mood to get reacquainted with an old friend? That was me with The Flash this week. I’d dropped off the book, bored with the constant speed villains, but seeing that this issue featured The Riddler, it seemed time to pop back to Central City.

Blimey. While I’ve been away, the comic’s gone all TeeVee. Barry’s blond hair has turned Grant Gustin brown, his face is being drawn to resemble the actor’s, there’s an anti-Flash police task force… it’s a bit jarring. Iris is still Caucasian, but let’s see how she looks come DC Rebirth.
I wouldn’t mind if the story was good, but it’s depressing, disappointing stuff. Things apparently kicked off last issue, and as we join Barry, he’s at the mercy of the Riddler. Barry starts to take the floating guns above him apart but it turns out Riddler has filled the skies with the killer drones and could target hundreds of citizens at once.

The impotent Barry has to be whisked away by Hartley Rathaway, the Pied Piper, who shows up on a souped-up bike (Hartley on a Harley?). There’s a bit of a chase as drones attack the heroes, but Piper ensures they get to the safety of a tunnel. You might expect the Pied Piper to use his trademark sonic pipes, but no, apparently he’s a regular Johnny Blaze. 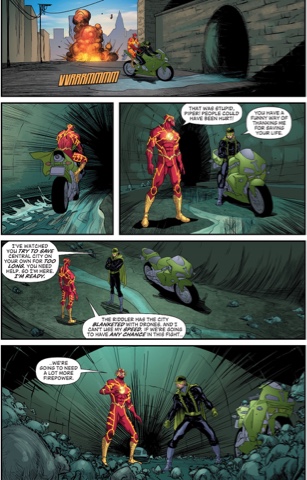 Barry? He’s a passenger, nothing more. He does mention to Piper that they need more firepower… before showing up at the end of the issue to surrender to the Riddler. Hopefully this is some kind of trick, but I could easily believe it isn’t, given Barry’s lacklustre performance up to now.
Shouldn’t this be the issue in which The Flash fights back, shows just what super-speed allied to his own not-inconsiderable brain can do? The Riddler is, of course, smart enough to give Batman a good fight, but Batman hasn’t got unimaginable super-speed. Rather than a classic confrontation, Barry disappears from the book for several pages while the Riddler frightens Captain Frye; Iris, Wally and Henry fret about Barry; and the Rogues hover around a poorly Golden Glider’s hospital bed. It may be fascinating for regular readers, but I doubt it – there’s not much in the way of tension in Van Jensen’s script, while Gus Vazquez and Joe Eisma’s art is pleasant, but pedestrian – when the biggest kick you get is noticing Henry Allen is wearing a Golden Age Green Lantern tee shirt, you’re in trouble. And I realise the artists didn’t design the current hideously fussy Flash costume, but surely it doesn’t have to look this weird? 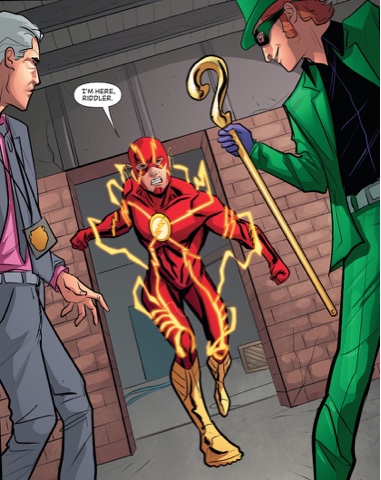 When this series began with the New 52, writer-artists Francis Manapul and Brian Buccellato had all kinds of ideas as to what Barry could do with his powers, there was a real energy to the book. I don’t know what the upcoming DC Rebirth relaunch of the Flash has in store but it has to be better than this slow death.