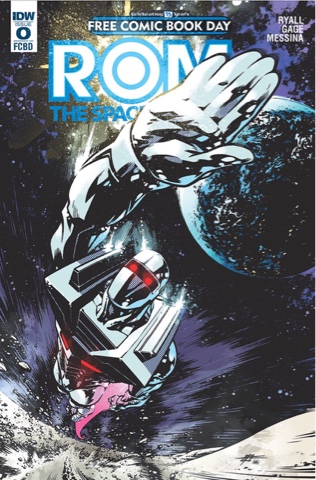 Not Rom, Spaceknight, you may notice. It seems the designation stayed with Marvel when IDW got the comic rights to the property from Hasbro. But the basic set-up established by writer Bill Mantlo and artist Sal Buscema in 1979 remains, with a silver cyborg sent to Earth to upend a secret invasion by the name-says-it-all Dire Wraiths. In just 11 pages we see rebooted Rom’s first encounter with US authorities within whose ranks the shape-changing wizards lurk.
I’m not sure why it takes two writers to provide this pretty simple prologue to the upcoming Rom #1 but Chris Ryall and Christos Gage do a decent job, providing a taster while leaving, presumably, the meat for the monthly. 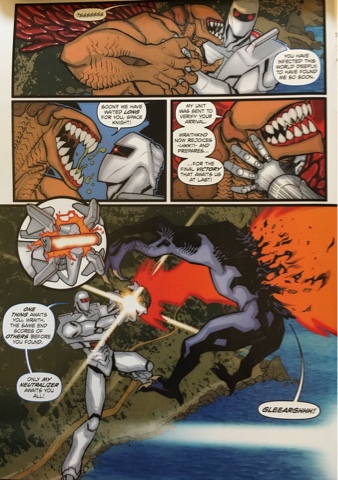 Things get a tad bloody, which doesn’t match the tone of David Messina’s full-colour illustrations, which look for all the world like Seventies in-comic toy ad art. On the one hand, it’s an interesting callback, on the other, it looks a tad ‘kiddie’. I doubt Messina – who gets an inking assist from Michele Pasta – is responsible for the tweaks to Rom’s armour, which are minor but enough to mar the enjoyment. 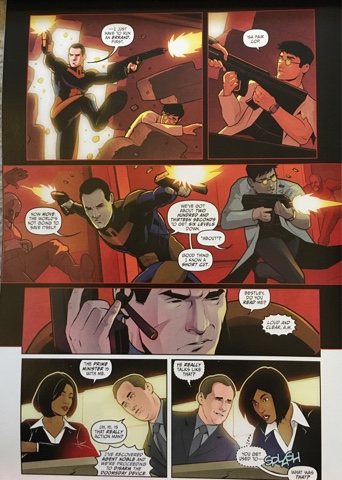 Apart from four pages of Rom model sheets, two of which may as well be a Spot the Difference, the rest of the book goes to surprise strip Action Man. Based on the old UK version of GI Joe, it features similarly simplistic artwork – this time from Chris Evenhuis – but it suits the script’s light tome. John Barber’s story sees Britain’s greatest secret agent challenged to stop Armageddon with only a member of his support team ‘with ideas above his station’ to help. It’s good clean fun with a nice hook for the ongoing.
With a superb cover by Zach Howard and Nelson Daniel, Rom #0 is a fun freebie to kick off a couple of new series. I may well try them both.