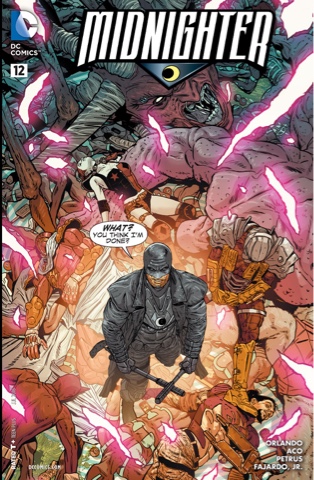 So goodbye Midnighter, we hardly knew ye.
Actually, that’s not quite true – 12 issues isn’t a long run but writer Steve Orlando packed so much into each offering of this series that by this closing chapter, we’re a lot closer to Lucas Trent than we were at the start.
The story takes up where we left off last time, with Midnighter, Apollo, Helena Bertinelli and the forces of Spyral determined to save the populace of tiny European principality Modora from newly minted super-weapon The Unified. He’s the creation of Dr Henry Bendix – insane scientist and longtime thorn in the side of Midnighter – with a bit of help from an uncharacteristically naive Amanda Waller.
Waller soon learns that trusting Bendix was a bad move, as The Unified attacks the innocent citizenry of Modora on a day super-patriot supervillain Sonar isn’t there to protect them. Waller hopes her ragtag Suicide Squad can save the day from a being with the powers of Superman, the ‘tactical nervous system’ of Midnighter and the conscience of Adolf Hitler.
Without giving away the highly entertaining details, let’s just say that the instalment concludes as satisfactorily as has every other issue these past 12 months. There’s intelligent action, intriguing characterisation and a Tolkein’s worth of epilogues that show where Midnighter is now and suggest where he may go next. And all of it is drawn by this series’ brilliant artistic double act, Aco and Hugo Petrus, swapping back and forth and sharing a sensibility. 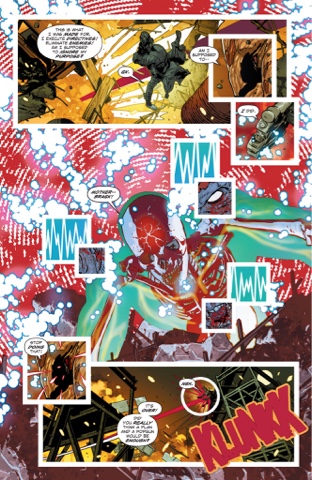 The mix of expansive panels and smaller images – often terraced within the page – makes for dramatic pacing that complements Orlando’s tight script. There’s a feeling of Pop Art, even though the colour choices of Romulo Fajardo Jr are generally miles from the neon palettes of that movement. We do get the occasional splash of brightness, but otherwise it’s pretty much understated earthy tones. It’s safe to say Fajardo is this book’s secret weapon, ensuring the smoothest of transitions between the artists. A tip of the hat, too, to Tom Napolitano, for a breezy lettering job that subtly adds to the enjoyment.
As for Orlando, he’s taken a deep knowledge of the DC Universe and woven it into a sturdy tapestry – if DC ever needs someone to write a 21st-century update on the legendary Janus Directive crossover, which involved the Suicide Squad, Checkmate, Captain Atom, Firestorm and Manhunter, they have him right here. Heck, his Amanda Waller may be drawn as the New 52’s Skinny Minnie, but her attitude is pure Kim Yale and John Ostrander. 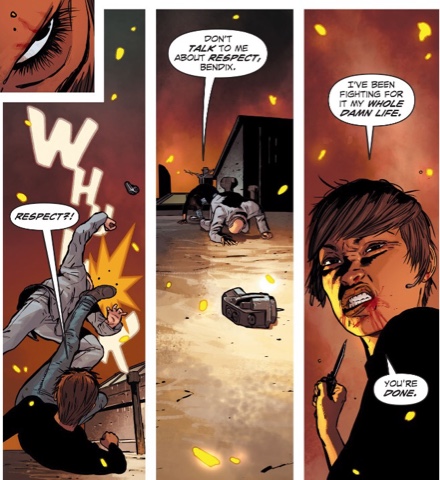 He also writes a wonderful Apollo. 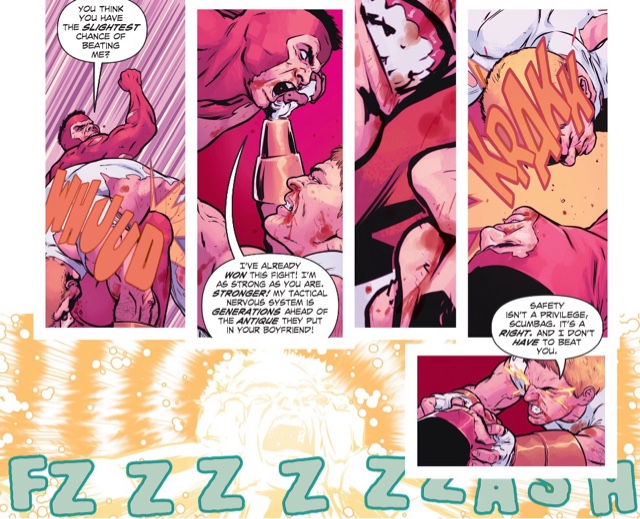 The ending of Midnighter, though, frees Orlando to helm the upcoming new Supergirl title and I can’t wait to see what he does with her.
Where Aco and Petrus are heading, I have no idea, but someone needs to snap them up and put their sweeping cinematic, occasionally Steranko stylings to more prominent use.
Midnighter is cancelled because it’s not gotten the big numbers. That doesn’t mean it hasn’t deserved the big numbers. It’s been an astonishingly assured series, serving up sexy spy-centred superheroics with a side of wit and a huge dollop of heart. For years Midnighter was just the Batman analogue who killed his enemies not simply because they endangered innocents, but because he enjoyed the violence of it all. He’s still that way, but he’s also something else. 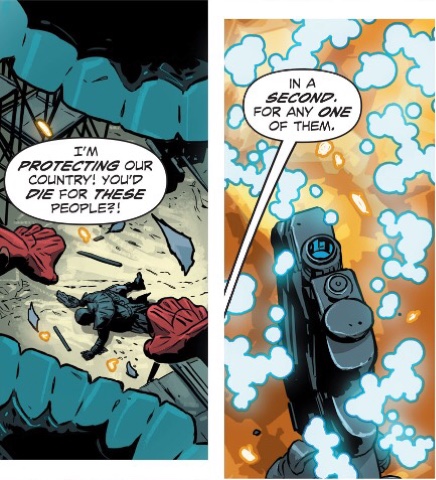 Midnighter began this run wanting to know who he was; not just who he was when not half of a couple, but what his background was. He may not have found out chapter and verse, but he does know himself, and it’s made him a more interesting character. I hope he’s back soon, cutting a swathe through the bad people and flashing that killer grin.