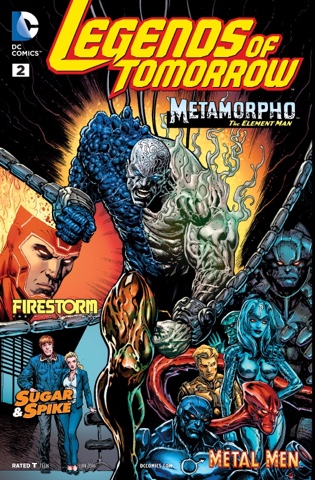 This is the second time I’ve written a review of the second issue of DC’s new 80pp anthology. The first vanished while I was having my tea (meatloaf, chips and creamed corn, thank you), with nary a whiff of a back-up. Mind, given I began that one promising to be more concise than last month, and went on to singularly fumble it, at least I’m not setting myself up to fail with Version Two.

Firestorm picks up directly from where we left off last time, with Ronnie Raymond and Jason Rausch primed to explode. There’s a problem with the Firestorm matrix and unless Professor Martin Stein can safely separate them, they’ll likely die, and take a lot of other people with them. Stein does manage to calm things down, and discerns that the problem stems from Jason – something’s wrong with his portion of the matrix, and he eventually slips into a coma. If Stein can get his hands on his original research notes he might be able to make him better, but they’re in the hands of his old assistant Danton Black – Multiplex, the Duplicate Villain. Firestorm would have a chance against him, but can the hero be created with someone else joining Ronnie in the matrix?

You can guess where this is going and while I love this return of the original dynamic of Ronnie and the professor, I like Jason and would be delighted with an eventual status quo in which any one of the three could join with either of the others for fun permutations. 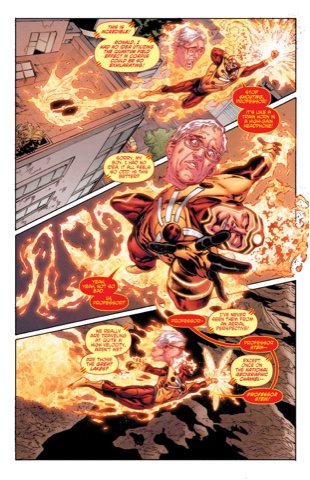 Once again, Firestorm co-creator Gerry Conway fits an awful lot of story into 20pp: as well as the main narrative thread, there’s Ronnie getting an offer he doesn’t want to refuse, General Eiling taking drastic action and Tonya answering the question of whether she’ll date Jason or Ronnie with some finality. Penciller Eduardo Pansica, inker Rob Hunter and colourist Andrew Dalhouse provide powerhouse images for Conway’s script, packing drama into every panel, whether that be a big, blazing moment or something more intimate. Now, if only they’d bring back Firestorm’s puffy sleeves, and remember that floating heads never look good with necks…
This series is shaping up to be something special, and if DC don’t continue it outwith Legends of Tomorrow I’ll be surprised and disappointed.
Metamorpho builds on last issue’s decent opener as Rex Mason starts to see that his new make-up isn’t just a curse – he can do some pretty neat things. Save money on lightbulbs, for instance. 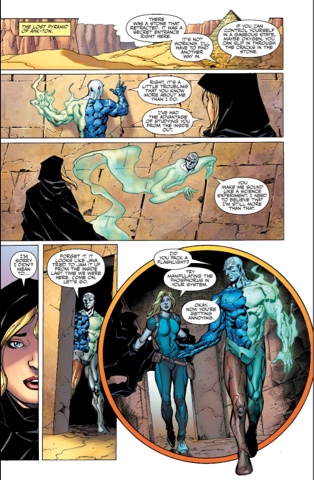 Helping him figure things out is Sapphire Stagg, and while I miss her classic dizzy ways, the more capable version here suits a strip with a more dramatic tone than the Sixties originals. She has more agency, is more a character than a type and if man of action Rex does become attracted to her, it won’t be just down to her looks. Sapphire’s dad Simon, and would-be beau Java? Still scumbags.
This instalment sees Rex and Sapphire travel to the Egyptian pyramid where Rex was reborn as Metamorpho, where he might be able to reclaim his humanity. Back in the States, Simon Stagg has an unpleasant encounter with space villain Kanjar Ro, who’s after the Orb of Ra that sparked Rex’s transformation.
Aaron Lopresti’s plotting is tight, the script sharp, with the growing relationship between Rex and Sapphire the highlight. And his art is a feast for the eyes, full of arresting images. Matt Banning’s confident inks and Chris Sotomayor’s candy colours are the icing on the chemical cake. Lopresti has a shot here of making Rex a real player in the DC Universe and I hope he succeeds.
Sugar & Spike was my favourite strip last time and it’s still up there, with Firestorm now on a par with it. To be honest, it’d be tough for me not to like a story which brings back Superman Island, an obscure piece of Silver and Bronze Age lore. The Man of Steel created it to hide green Kryptonite, to stop his enemies using it against him, but now developers are starting to colonise it to create ‘La Vida Super’. It’s too late to hide the ‘what was I thinking?’ shape of the island… 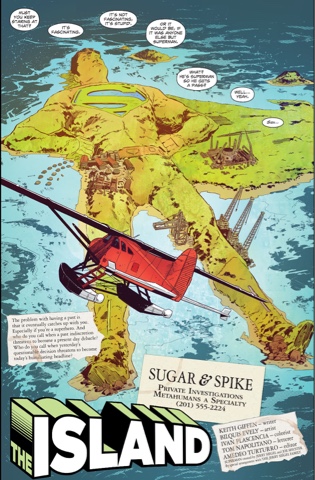 … but he could at least get the green K away from there. And using ordinary humans is safest for him. It turns out it’s not that safe for Sugar & Spike, though, as they find a sentient doll girl out to learn Superman’s secrets – and she doesn’t care who she kills to learn them. (In their Silver Age series Sugar would call Spike Doll Boy – coincidence?) 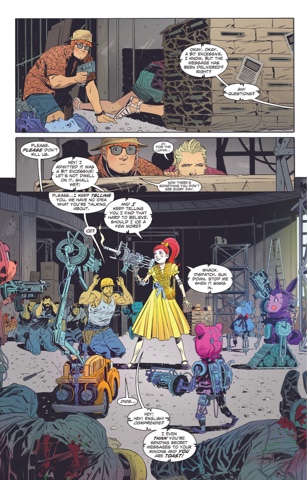 It doesn’t sit well with me that an extension of “Tomorrow’s Teenagers … Today!’ should include bloodied corpses, but writer Keith Giffen has never shied away from a shock moment. Happily, the strip doesn’t dwell on them, with most of the action good-natured. Well, as good-natured as Sugar gets… boy, is that gal grumpy, it’s like she never graduated from the terrible twos. I honestly don’t know why the super-sweet Spike doesn’t pull her ponytail, like when they were kids.
Once again Giffen doesn’t give himself a breakdowns credit, but if he isn’t doing layouts for Bilquis Evely, she’s a massive fan. Could this panel look any more Giffen? 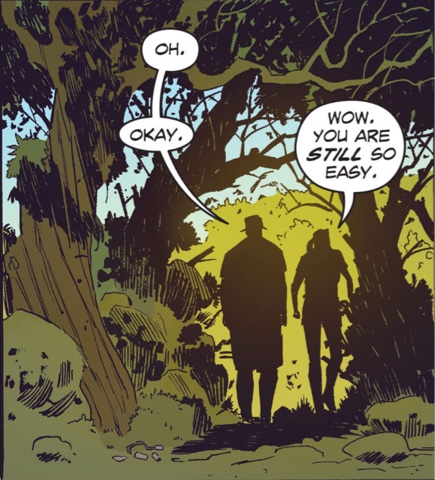 If it is a case of Evely pencilling over Giffen’s thumbnails, she still deserve huge credit for the smart, subtle acting and her knack for mood and place. Ivan Plascencia’s colours add a dash of reality to some pretty mad proceedings, while Tom Napolitano earns his paycheque for that title lettering alone.
The Metal Men was my least favourite strip last time, but this entry is a lot more interesting. First we have Will Magnus, man of action, enacting a smart plan to save his almost human creations. Then there’s the three-dimensionally of the army folk tasked with putting the Metal Men to sleep. The mystery of computer hacker Nameless. And this guy! 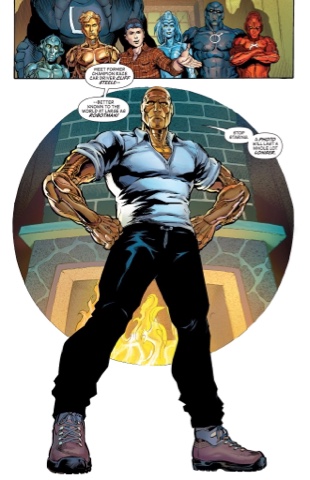 Any time a member of the World’s Strangest Heroes cameos in a comic, I’m there, and Robotman is my favourite (sorry, Scott Fischer). And given how previous continuities have seen Doc Magnus create bodies for Cliff Steele, it’s great to see the connection revived.
I wish there was more focus on the actual Metal Men’s personalities and relationships, but writer Len Wein has earned my patience; I wouldn’t be surprised were he to spearhead the return of a more traditional-looking team. If so, Yildiray Cinar is the man to pencil them – his art here with inker Trevor Scott and colourist Dean White is vibrant fun. 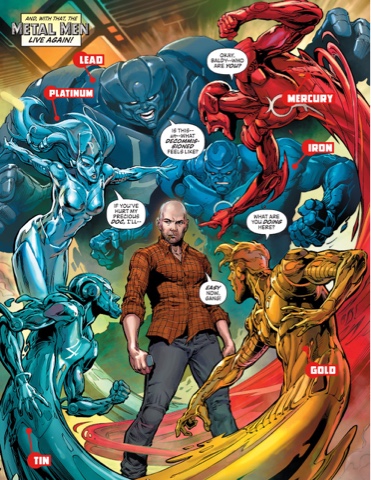 Kudos to the art team for the nod to Will’s traditional jacket in the design and colouring of the shirt. I almost wish Cinar’s holo-Will was an ongoing new look, it has to be better than the Young Adult version of current continuity. At least give the man a pipe!
The cover, illustrated by Liam Sharp and coloured by Sotomayor, is a real winner, and I love that we get proper logos… we could do with such inside.
Two issues in, and I’m enjoying this book hugely. It could usefully sacrifice a page of promotional guff for a recap of the four strips, I’d love a lettercol and yeah, splash page logos, but it’s a wonderful grab-bag that showcases the DC Universe’s possibilities. Let’s keep it going, DC.

13 thoughts on “Legends of Tomorrow #2 review”