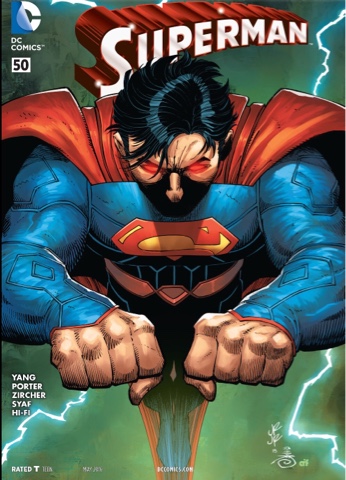 It’s Superman’s big 50th issue and we’re getting the first meeting between New 52 Superman and pre-Flashpoint post-Crisis Superman!
Oh hang on, DC changed the story, they’re putting that in an upcoming issue. Unless they change their corporate mind again…
OK, so let’s just enjoy whatever this double size special has to offer.
Last week, in Action Comics, Superman got his powers and costume back, ready to take down Vandal Savage. This issue could go anywhere, with a Superman revitalised in body and soul taking on a more powerful than ever Immortal Villain. So where does it go?
Downhill. After a brief tussle with Vandal, Superman finds himself tasting alternate lives courtesy of the Puzzler’s tech. 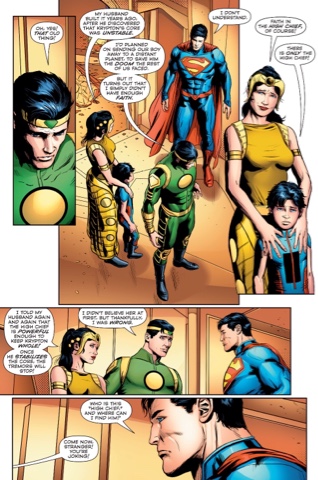 In one, Krypton lives because the comet that powers Vandal would have made a Kryptonian strong enough to stave off the planet’s destruction. In the other, Superman is Vandal’s warlord, leading the strong to protect, well, other strong people, as the weak have no place in a world shaped by Vandal Savage. 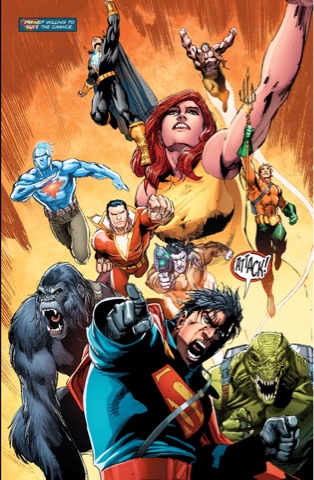 This isn’t For the Man Who Has Everything, though – Superman isn’t immersed in a fantasy world, he knows who he is and that Vandal is trying to tempt him to the dark side. Which means there are no stakes. And after almost a year of Superman mostly acting like a Grade A jerk, would a single reader expect him to make the wrong choice at this stage?
I can’t see it, and I’m disappointed that after some good issues writer Gene Luan Yang serves up this weak stew of a story. It’s basically padding. Superman has already gotten thorough his dark night of the soul, he’s beyond temptation so he’s going to tread water.
It’s not a terrible tale, just rather, to quote Charles M Schulz, blah. There are a couple of good moments – Superman’s hilarious ten-second reformation of the Puzzler, and his sweet reunion with Jimmy and Lois (firefighter Lee Lambert is no longer with them as she exists only in Action Comics). 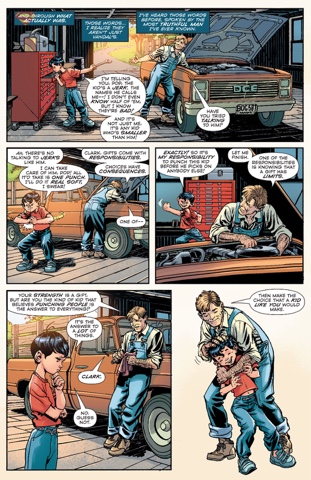 And there’s a delightful Smallville flashback, mainly due to the cameo artwork of Superman veteran Jon Bogdanov. Would someone give that man an issue?
Also going some way towards making this book worthwhile are the other artists – regular Howard Porter, and visiting craftsmen Ardian Syaf and Patrick Zircher. Porter handles the ‘real’ world in his wonderfully quirky way, and brings a degree of grandeur to the climactic scene of, er, Superman pushing a comet around. 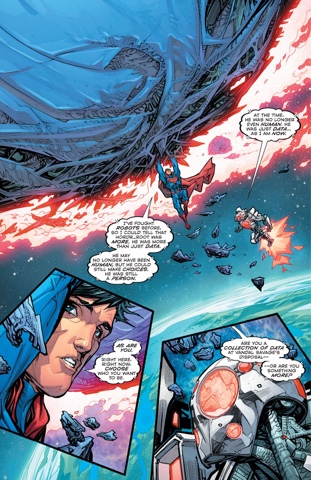 Zircher brings us Krypton and Syaf the superbeings fight scene. Zircher’s sequence is simply beautiful, his Jor-El and Lara breathtakingly gorgeous, his Krypton a Silver Age wonderland. And Syaf’s rough energy is spot on for the scene of Superman leading good and bad guys alike into battle.
There’s a fourth artist on the book, as recent regular John Romita returns to give us… let’s be kind and simply say his take on Superman with longtime inking partner Klaus Janson.
This is the last hurrah for Yang, and maybe Porter, and I just wish they’d gone out on a more interesting, vaguely engaging note. If Truth had ended in last week’s Action Comics, which it easily could have, Yang and Porter could have given us a fine epilogue, told us a Superman story unfettered by the demands of a poorly conceived crossover. I hope they team up again one day, and give us that book.
As for Truth, I’d like to say it was all worthwhile in the end, but I’d be lying. Here and there we got glimmers of what the creators on the various books could do, but far too much of it was Superman as ill-tempered fool fighting fourth-rate nonentities for reasons that make sense only if you’re drunk. One several-issue sequence, in Superman/Wonder Woman, gave us the two formerly shining superheroes as sociopathic bullies – a shameful scenario that should be burned from the DC library.
Rebirth can’t come soon enough.