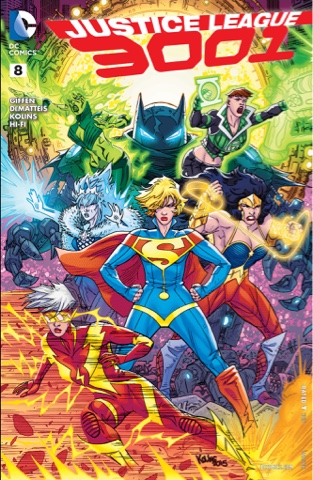 It’s 3001, do you know where your heroes are? Supergirl, Wonder Woman, Ice, Guy Gardner, Fire, the Flash and Batgirl are undercover on Takron Galtas, prison planet and seat of galactic dictator Lady Styx’s empire. Their Justice League teammates having been massacred by her massively powered lackeys, the Scullions, the survivors are keeping their heads down. Kara Zor-El, utterly awesome accidental exile from the 21st century, has fallen into the leadership role, and she won’t act against their enemy without a plan. And that requires information.

Batgirl is Tina Sung, descendant of Bruce Wayne, and as becomes pretty obvious here, also Damian Wayne – she’s a cheeky bugger, unable to play the long game when she could be out kicking Scullion butt. And if it gets her killed, well, isn’t that better than cowering in a corner? 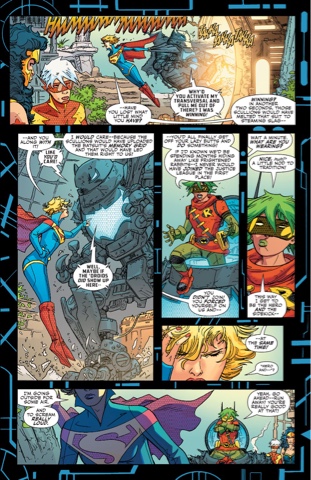 Wonder Woman is equally frustrated by inaction, but she’s an immortal; she has patience. The Flash, Teri Magnus, is a nervous wreck still, despite it being six months since the hero massacre – but then, she’ll have watched the horror unfold in slow motion. And Guy, Fire, Ice, they all have their own problems. 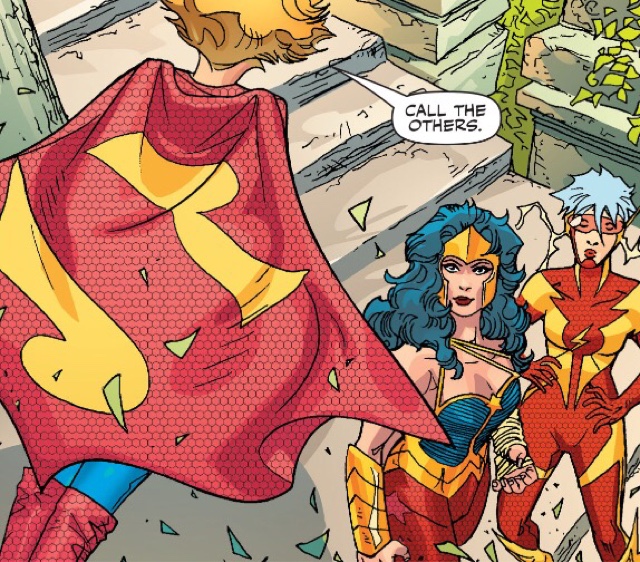 But does any of it really matter when Supergirl is soaring in an electrifying new outfit? Yup, I may be that shallow. I’d argue that it’s more a case of the creative team behind this book giving us a serious superhero drama with a big dollop of pure comic book joy. The depth of character as revealed though action and interaction from writers Keith Giffen and JM DeMatteis; the well-defined arc of the bigger narrative; the zestful art of illustrator Scott Kolins, colourist Hi-Fi and letterer Rob Leigh… the sheer grooviness of Justice League 3001 may be the best-kept secret in comics. The poster-worthy cover by Kolins and Hi-Fi is followed by a splash page up there with images from the Sunday SF strips of yore, and then it’s page after page of pure DC delight.
I will give Giffen – cos it’ll be him, count on it – a demerit for repurposing the name of a member of the Legion of Superheroes. It’s not necessary, and has me terribly worried at the nature of the motley crew which greets her as she lands on planet Naltor (yes, another LSH reference). No twisted Legion tribute act, please!
Then again, this issue does give me a location I’ve always wanted to see in DC’s thousand-years-from-now future, so that’s a win. 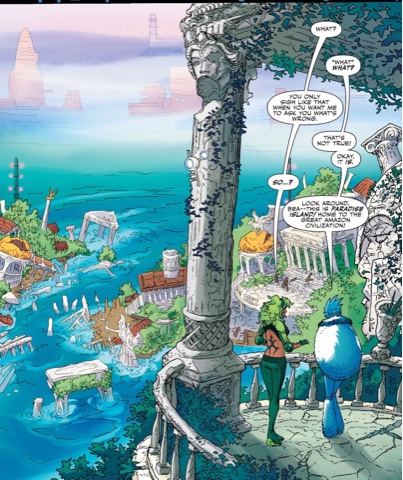 And the reveal of Lady Styx is a masterpiece of megalomaniacal grandeur. A book this consistently good could never irk me for long – the sheer imagination at work, the detail put into every panel… this is a comic people will be enjoying years from now. Who knows, maybe even a millennium.