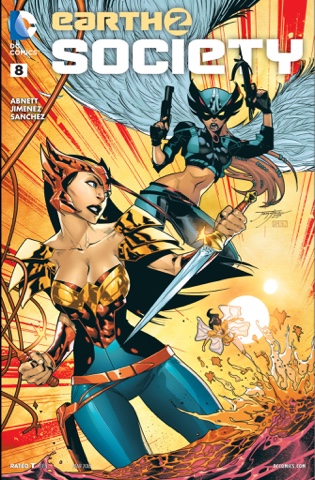 Earth 2 Society is a Wonder Woman of a book for me, a series I want to like, something I try occasionally and always end up setting aside. I cannot for the life of me understand why DC would retool legends so as to make them nigh unrecognisable, but the original Green Lantern, Flash and co mean so much to me that I want their successors to star in good stories.
Noticing this book has a new author in Dan Abnett, one of the sharpest superhero writers around – his Legion of Super-Heroes and Resurrection Man work with Andy Lanning was especially stellar – I decided to try again. And I’m glad I did. The set-up is as previously, new superheroes trying to lead a population of refugees on a new planet, but the tone is a few shades lighter. The characters seem less hysterical, perhaps because the situations aren’t so constantly apocalyptic.
This issue begins with Hawkgirl well into the second month of an aerial survey of her new world. Abnett’s script quickly puts us inside Kendra’s head. 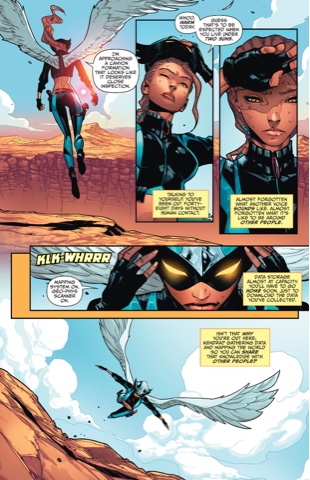 She flies into mystery and danger when Amazons, who shouldn’t even be on the planet, attack.
In Metropolis the World Army Cabinet – Green Lantern, Commander Soto, Captain Steel, Sandman, Superman and Dr Fate – are discussing current problems. Food shortages, disease, free elections and something a little more personal. 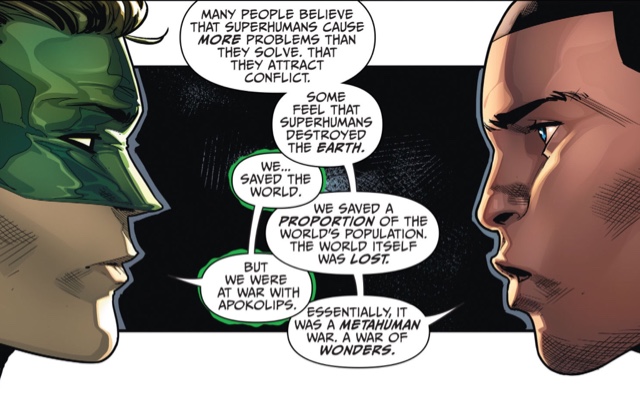 They’ve a lot on their plate, but the subtext is the others’ fear that Alan Scott’s apparent ascent to godhood may see him lose touch with humanity. When he intervenes in a battle Power Girl, Huntress and the Flash are having with a weird giant, he becomes even bigger to end the situation – but once things calm down he seems disturbingly comfortable remaining huge. At this rate he’ll be dumping the costume for the full Dr Manhattan, and drab as his outfit is, I doubt anyone wants to see that. 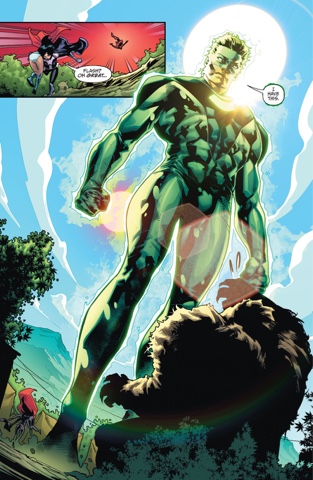 The least interesting strand this issue is new Batman Dick Grayson’s intervention in Gotham’s energy wars. It’s OK so far as Bat-action goes, but Batman has never featured heavily in Justice Society stories, so feels wrong here, and besides, he has enough play in titles set on regular DC Earth. I’d mind less were this Dick as Robin, hanging out with Huntress like in the Seventies.
That apart, there’s enough good stuff in this issue that I’ll be back next time. And if artist Jorge Jiménez is back too, I’ll be good with that; he’s drawing very much in the DC New 52 super-glossy house style, but there are some interesting facial renderings and an elegant, kinetic quality that serves the zippy script well. Alejandro Sanchez’ colours are bright and beautiful, while Travis Lanham’s letters are nice and neat. I would like it, though, if Jiménez would draw women a tad more realistically, less waspishly waisted and bendy – the cover demonstrates his aesthetic.
If you’re like me, an old fart fan who wants a JSA book with the classic flavour, you may well enjoy this issue. We’re not there yet, but we’re closer.