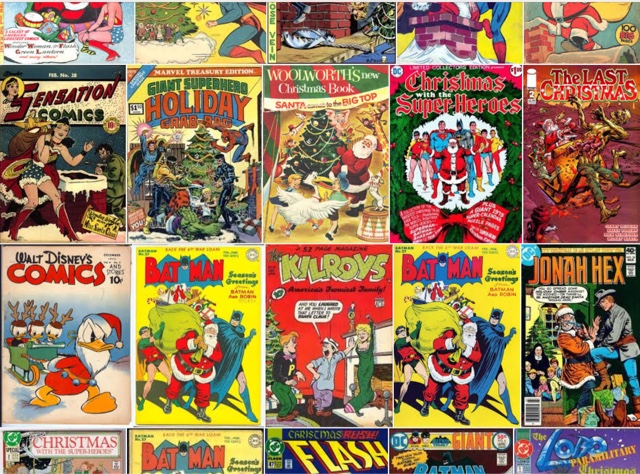 It’s Christmas, time for the publishing companies to deck the comic shop shelves with seasonal baubles to get the cash registers jingling. Actually, not so much these days, but back when there was room for one-off stories, DC and Marvel would give us a few such offerings every year. They never went so far as to do the snow-on-the-logo thing so beloved of UK comics, but the seasonal spirit was present. Let’s take a look at some of my favourites… 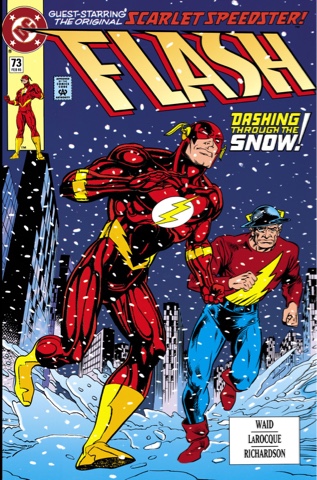 It’s funny the tricks the mind plays. In my memory, this issue has a note on the final page from writer Mark Waid explaining that he could now reveal the real title of this issue… I’ll get to that in a minute.

Wally West and girlfriend Linda Park are spending Christmas with veteran Flash Jay Garrick and his wife Joan. Overgrown kid Wally is driving Linda mad with his super-speed fussing and Joan bonkers with his impatience for Santa to arrive. So, Jay takes him out for a run, and they spend the evening doing good deeds of the heartwarming Christmas tale variety. Waid and penciller Greg Laroque find a nice balance between superheroic and super-Hallmark, and throw in a heck of an epilogue. And that’s where I thought we learned the title of the story was A Visit from the Man in Red. And if you don’t know why, track down the back issue, head to Comixology or put the trade paperback collection on your Christmas list… of course, if I name that book, I give it all away. Dang. 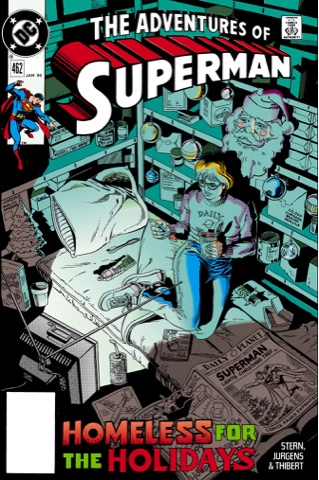 Homelessness has been a Christmas staple, from the Christmas Story itself through It’s a Wonderful Life and One Magic Christmas. So it fits right into a comic book Christmas issue. Clark Kent is shocked to learn that he isn’t the only person regularly sneaking into storerooms – intern turned gopher Alice has been living at the Planet since her mother died, leaving her with massive medical bills and nowhere to live. Roger Stern, Dan Jurgens and Art Thibert aren’t hugely subtle with their plea for a society in which we don’t help others only at Christmas, but they’re fine craftsmen and they pull it off. There’s huge heart in this story and re-reading it today I still get a lump in my throat – not just for the tale itself, but for a time when a capable, compassionate, capable Superman flew the streets of Metropolis. And when he came down to Earth, he was surrounded by a large, likeable supporting cast who helped make his world a place worth visiting. Find this on Comixology, along with the other Superman titles here. 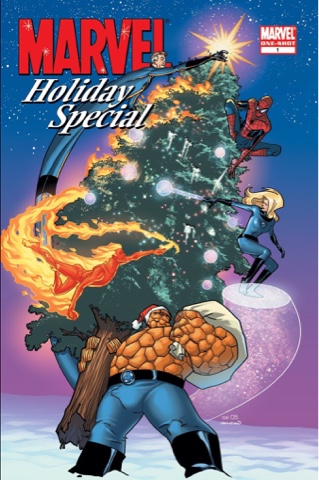 It’s the Avengers Christmas party and Dr Strange is hosting. New hero Gravity wants to come along, but is having trouble getting in. Spiderwoman can’t understand why every time she moves, she’s getting snogged under the mistletoe. And Santa Claus wants to destroy everyone. Well, not Santa Claus as such, more like a wayward robot built by a well-meaning young scientist. 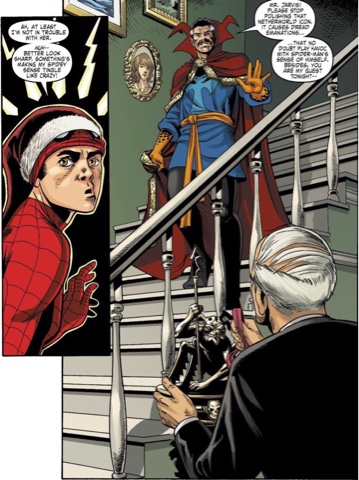 Writer Jeff Parker provides many a moment to cherish, while artists Reilly Brown and Pat Davidson produce breezy artwork that’s full of festive cheer. Throw in the best Captain America speech ever – homaging one very famous letter to a newspaper – and you have the comic book equivalent of a nice glass of mulled wine and a mince pie. 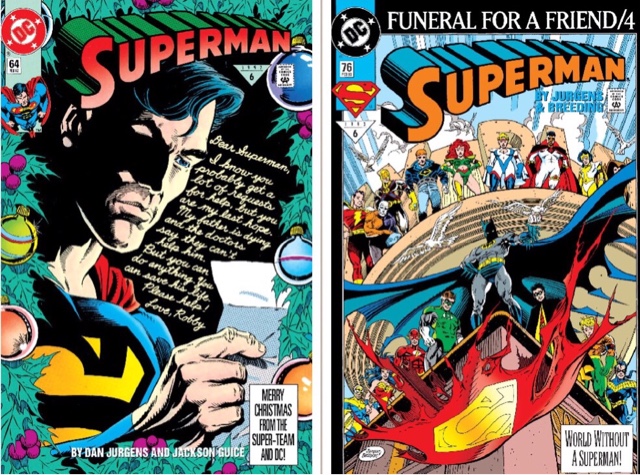 ‘Metropolis Mailbag’ shows us that on Christmas Eve every year Superman stops by the city post office to catch up on the mail sent to him throughout the year. Lots of it comes from people wanting to enlist him in get-rich-quick schemes, but a few are genuine calls for help. This issue sees him dealing with a few of them and it’s a bit of a tearjerker from Dan Jurgens and Jackson Guice. And oddly for a Christmas tale, there are Easter eggs, in the days before anyone called ’em that – he’s on a very famous Christmas street, and apparently the boss of the Metropolis mail office is Fantastic Four postie Willie Lumpkin. 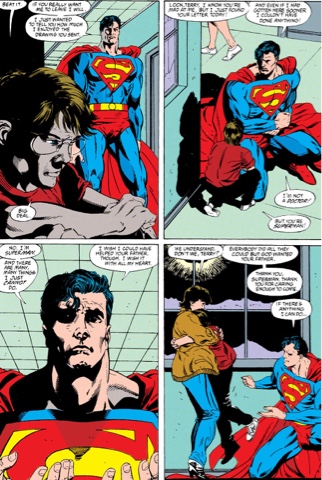 A year later, Dan Jurgens and Brett Breeding gave us a sequel in which, with Superman recently killed beating Doomsday, his friends in the hero community take over the task. Elsewhere, Jimmy Olsen helps a young man who feels very guilty, while Lois, Jonathan, Martha and Lana share their sorrow over the loss of Clark. It’s a lovely story, a great reminder of how inspirational Superman was, and could be again. 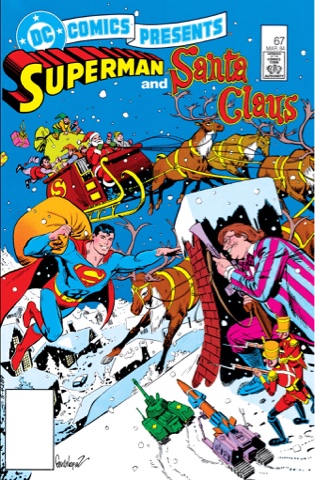 And it’s another Superman comic. I swear, I considered loads of Christmas stories. My absolute favourite, the Deadman story from Christmas With the Super-Heroes #2, has been too much written about to need discussing here. The one festive fable featuring my favourite team, the Legion of Super-Heroes, from Super-Star Holiday Special #1 isn’t that great. Kitty Pryde’s encounter with a ‘demon’ is superb, but not terribly Christmassy – I want fun and sentiment. And that’s just what DC Comics Presents #67 gives me, as the Man of Steel teams up with Santa Claus. Writer Len Wein picks the perfect villain in the Terrible Toyman, the antithesis of the kindly old man from the North Pole. That other Far North resident, Superman, meets Father Christmas when Toyman’s latest plot sees his powers go awry. Santa knows Winslow P Schott is top of the naughty list, so helps Supie take him down. 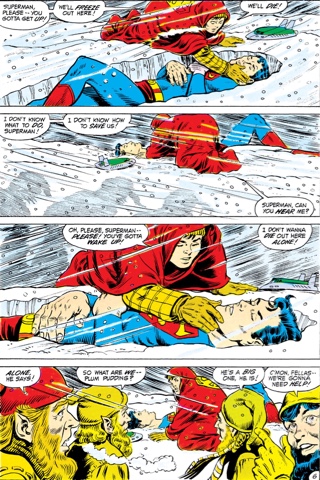 Wein’s script is sharp, funny, inventive and yes, a little sentimental. Just perfect, and perfectly brought to life by Seventies Superman art team supreme Curt Swan and Murphy Anderson. Throw in a glorious cover by Jose Luis Garcia-Lopez and you have a true cracker. If you’ve not read it, it’s also on Comixology.

So those are a few of my big favourites – how about you?

And finally, thanks for reading, and whether you’re a regular visitor, or here for the first time, Happy Holidays!