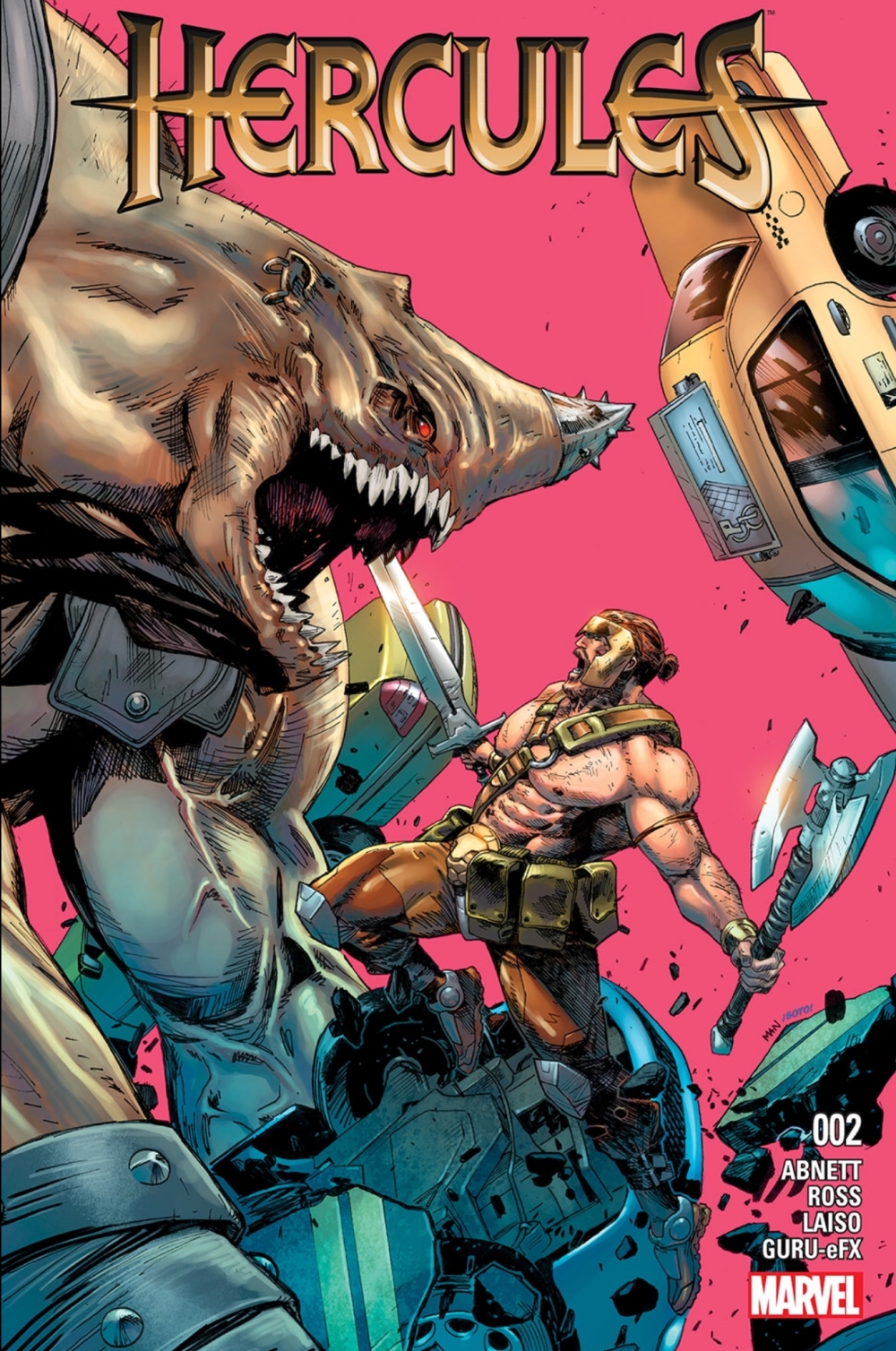 Hercules, self-proclaimed Prince of Power, is trying to restore his reputation. He’s realised that after years of carousing he’s looked on not so much as a hero than as a joke.

And a dangerous one at that – if people see him at the scene of a crisis, they expect things to get worse, not better.

So he’s had business cards printed bearing the legend ‘Hercules: Labours Undertaken’ and joined an AA-style programme. He’s getting his life back on track and trying to pull another indolent immortal up by the bootstraps. Fellow former Avenger Gilgamesh, though, is denying he has a problem, while sleeping on Hercules’ couch and annoying landlady Sophia.

He’s not entirely useless, mind. As this issue begins Hercules is taking on the Gigantes, giants who have fled their home under the earth. They’re causing chaos, trying to clear New York of mortals and claim it as their own. ‘Gil’, who’d rather stay behind and help
Sophia move a washing machine, has provided ‘Herak’ with a rather useful piece of weaponry.

After a thoroughly entertaining fracas, Hercules wanders home, has an encounter with his less-than-adoring public, and visits another refugee from myth – oracle and watch repairer Tiresias. Can she provide insight into what’s causing the ‘old things’ to flee their traditional homes or be destroyed?

And I’ll say no more. If you didn’t try the debut issue, give this second one a look. Writer Dan Abnett has moved Hercules’ character on in a logical way, making him more than the oft-oaf of recent years. He’s hugely likeable as he embraces the modern world and his shortcomings. Gil and Sophia are nicely sketched, and good company, while the not-actually-mythological characters are far more bearable than their trying-too-hard equivalents over at DC. Tiresias, in particular, is great fun and I hope she sticks around. Abnett’s dialogue is a treat, and the New York atmosphere he conjures convinces.

Luke Ross’ pencils are clean and strong and classically Marvel – his Hercules, as inked by Emilio Laiso, has a lovely air of John Buscema’s work about him. OK, the man-bun is truly hideous, but the storytelling is strong, with a big daft fight scene and moments of
delightful domesticity. The colours of Guru-eFX are bright and beautiful, while letterer Joe Sabino produces some nice Greek stylings. Clay Mann’s art for the cover is terrific, tee-shirt worthy, and colourist Chris Sotomayor’s choice of a pink background really
makes things pop.

Before this series appeared there was controversy when Marvel disavowed representations of Hercules in its comics as bisexual, despite a liking for the occasional chap being well in line with classical presentations (and that’s without getting into the centaur business). Well, I hope the advocates who were up in arms notice this panel…