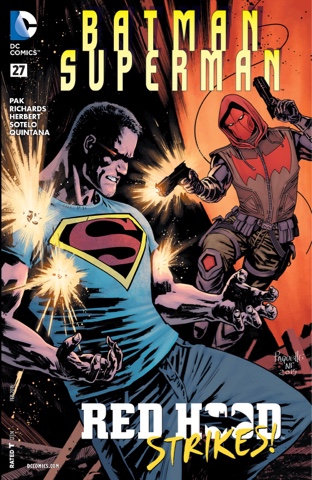 That’s a striking cover from artist Yanick Paquette and colourist Nathan Fairbairn. Nicely composed, dramatic… ahould DC ever print a story in which something vaguely like this scene occurs, it’ll be spot on

It’s not necessarily a bad thing that Superman and Red Hood don’t attack one another this issue. I’m far happier to see a focus on teamwork as our cover stars, along with Batgirl, Nightwing and Jim Gordon Batman, execute a plan to foil immortal villain Vandal Savage.
It takes a fair few pages until everyone is in line, mind, as Gordon is seriously dickish towards Superman, refusing to trust him, to believe he won’t get everyone killed. Despite his years of working with the distinctly unpowered Batman, he thinks a demigod level Superman is going to be utterly reckless, totally incompetent. 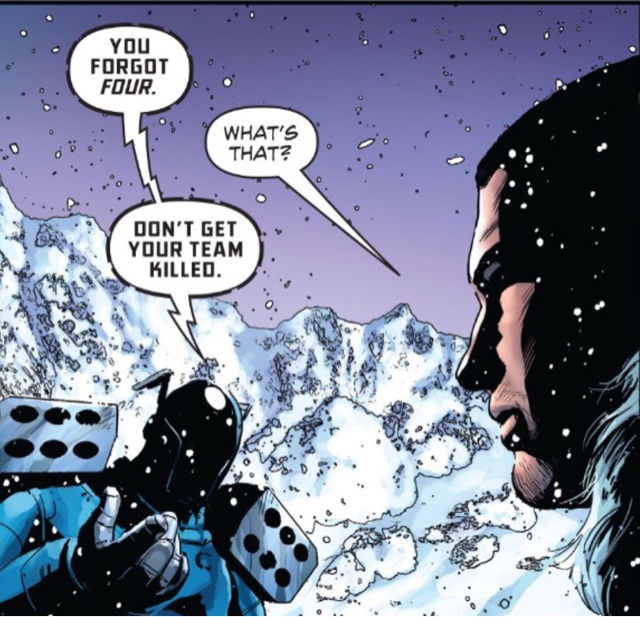 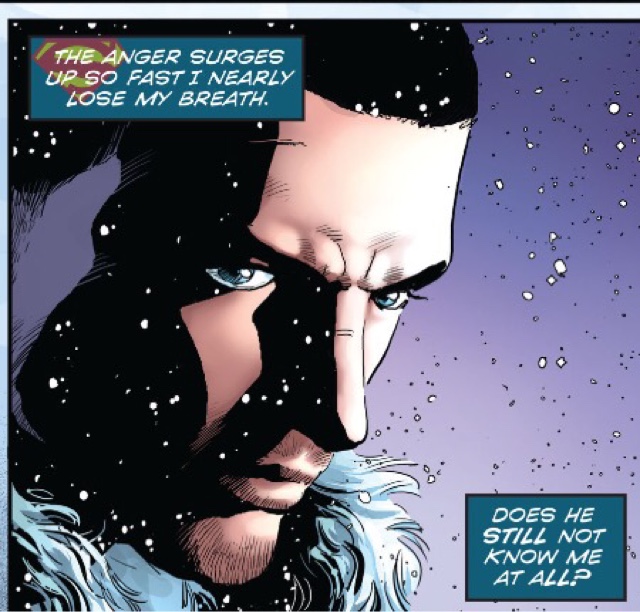 Granted, Superman is a tad moodier than the norm – ‘contradictory’ doesn’t begin to describe his attitude in the last panel – but Gordon has no reason to doubt his intentions or ability to the extent he does.
Gordon’s attitude is all about creating conflict between Superman and the new Batman. Regular Batman is out of the picture, Superman has changed, so we need to see that the relationship is different. But we could get a different take by showing how Superman and regular-personality-Jim-Gordon work together – Gordon is a massively experienced police officer. He’s been a street cop, a detective, a manager, a longtime associate of Batman. Certainly, the mecha-batsuit is new to him, but he’s an adaptable guy; he wouldn’t be sniping at Superman constantly, demanding ‘Kent’ comes up with a plan, stat. He’d be rallying the team, helping the experienced superheroes – including daughter Babs – come up with a solution.
For decades, the World’s Finest series teamed Superman and Batman and Robin against threats from throughout time and space. There was no doubt these guys got on and the conflict came from elsewhere. But for years now, the renamed Batman/Superman book has given us back and forth narrations, endlessly contrasting their perspectives, giving the impression they rarely agree on anything. It’s all a bit tired. When it was selling hundreds of thousands of copies an issue, the World’s Finest Comics strapline was ‘Your two favourite heroes together’, not ‘Your two favourite heroes arguing’. This issue’s story has flashbacks of a years-ago attack on Gotham stopped by Superman and Batman: one narrated by Gordon, the other by Superman. Superman must choose between stopping a doomsday weapon or saving Jimmy Olsen’s life. He opts for the former, obviously. Thinking back, Gordon wonders if Jimmy, who never panicked as he was falling to his likely death, trusted Superman’s other friend, Batman, would save him. Superman recalls that he didn’t think Batman was close enough to save his young friend – but he found a way. 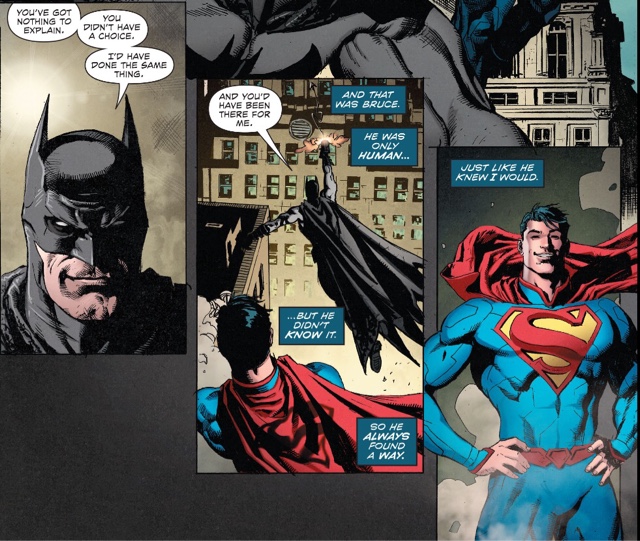 (And how lovely to see a smiling Superman in red and blue costume – even that one!)
When Pak gets away from the presumably editorially enforced theme of Trust, the story is decent fun. Pak tries hard to make the instalment work, even giving us a nice, unapologetic recap. Seeing the heroes work together to con the cocky Savage is enjoyable, with Batgirl once again the highlight… 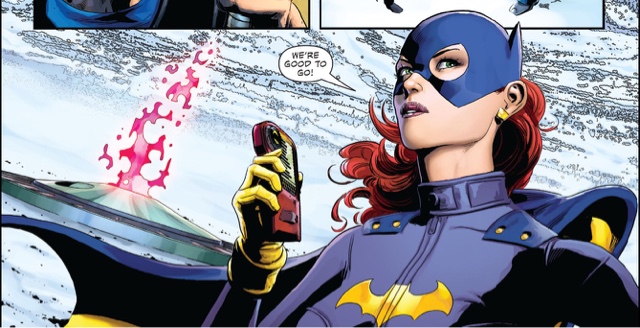 … even as her own father thinks patronising thoughts. 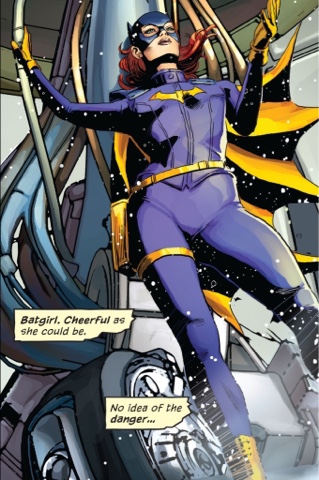 Red Hood doesn’t get much to do, and Nightwing is barely there, but a plan is executed quickly and efficiently and I’m just darn glad to see another sequence in the Truth era of the Superman books over. 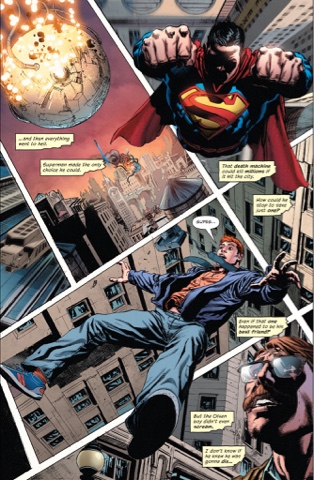 The art is strong, with two pencillers not leading to visual inconsistency. Cliff Richards, who was around last issue, is back, joined by Jack Herbert. It looks like Richards handles all the present-day sequences, while Herbert gives us the flashbacks. I especially like the ‘falling Jimmy’ panels with the ginger snapper breaking the frame, which follows a very nicely composed opening page. 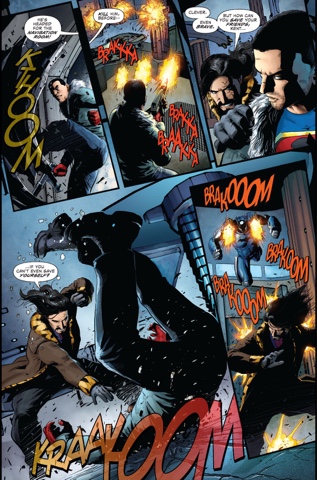 And Richards brings real dynamism to the fight scene between Vandal and Superman, though I really don’t like seeing Supermam so happy to use a massive great gun. Colouring the book, Beth Sotelo and Wil Quintana add interest and emphasis.
The Vandal Savage story hasn’t been awful, but I can’t say I’m upset that the next few issues are a flashback tale, featuring the real Batman and super-Superman.