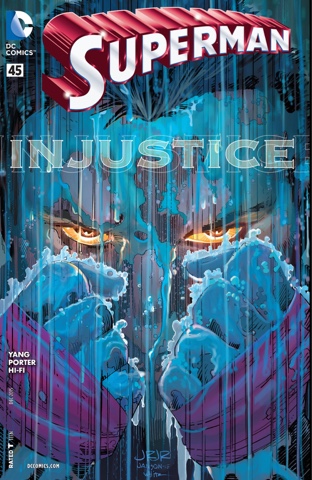 Clark Kent uses his skills as an investigative reporter to learn how computer crook Hordr_root fits into the apparent conspiracy against him. He’s lost his secret identity, been attacked from every quarter – it’s time to turn the tables, become the party with information, and the power.
This issue a meeting with former Hordr worker Condesa leads him to Oakland, California, where he finds a way to get to Hordr_root.
An encounter with the Quarmers who stole most of his super-powers, followed by a sand creature named Apolaki, allows Hordr to escape, so Clark tracks a new lead. He’s soon at a superhuman fight club, eating tacos while he tries to work out what’s going on. And what’s going on is rather intriguing…
Now this is more like it. An issue of Clark using his brains in a bid to get the lay of the land; work out who’s done what to him and why, in the hope of reclaiming his powers and his personal life. Clark does threaten to throttle Hordr_root at one point, but I can forgive that given that the rest of this chapter sees him treating his situation with more perspective and humour than we’ve seen in a long while. There’s only one real bump along the way… 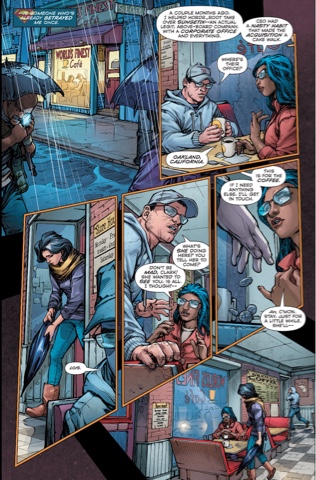 … but it’s so out of kilter with how Clark acts on every other page that it reeks of editorial edict. Honestly, Clark trusts a woman who has already wilfully betrayed him over one who acted only to save his life? I strongly suspect writer Gene Luen Yang was told to serve the ‘Superman doesn’t trust Lois’ idea, but apart from that, given free reign to actually have some fun with the character.
And fun he has, with moments such as this: 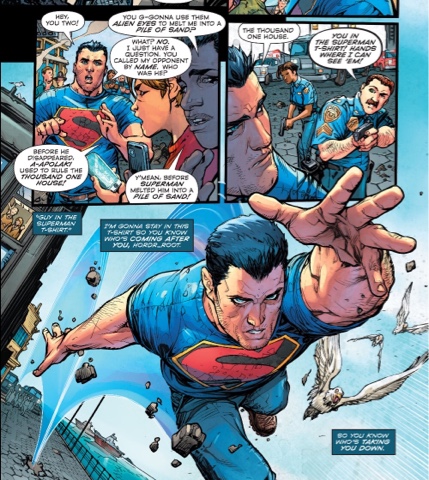 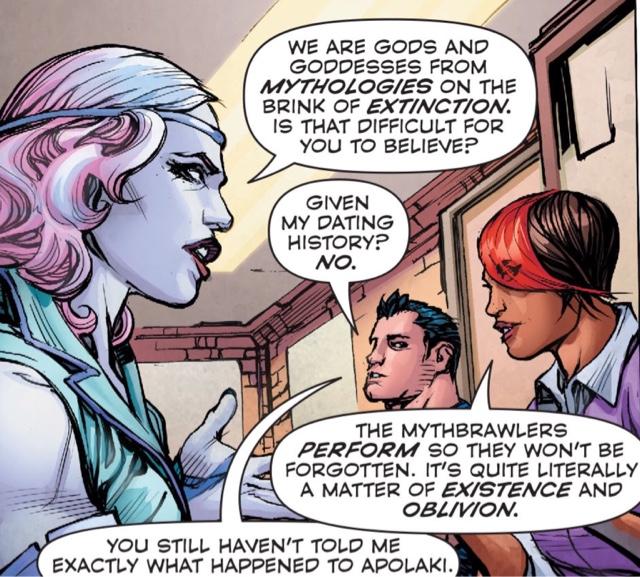 Yang gets extra points for having Clark remember a bit of Pa Kent wisdom as he’s sneaking into the fight club; I’ve moaned about how often today’s writers go to the Jonathan Kent well, but here nostalgia leads to the best moment of Yang’s tenure. Now that’s a eureka! I dearly hope it informs Clark’s actions going forward, that this is the tipping point that will get Clark back to being a Superman worthy of the name.
In other developments, there’s something meta around the metahuman fight club – Filipino deities our speciality.

You’ll notice that John Romita Jr isn’t pencilling this issue. Justice League 3001 artist Howard Porter is filling in and the book just looks wonderful. The storytelling is exquisite, the acting superb and the backgrounds and bit players full of character. He even gives us the odd arrangement of panels that are inventive without being obtrusive, such an early keyhole arrangement when Clark is resolving to crack the mystery.
I think Porter is around for a couple of issues, and I dearly wish he’d take on the assignment full-time. He brings a real injection of energy to the book, making the new-look Superman more like the classic. And not once does he default to the modern cliche that is Burning Eyes Man. Heck, he actually makes Clark adorable. 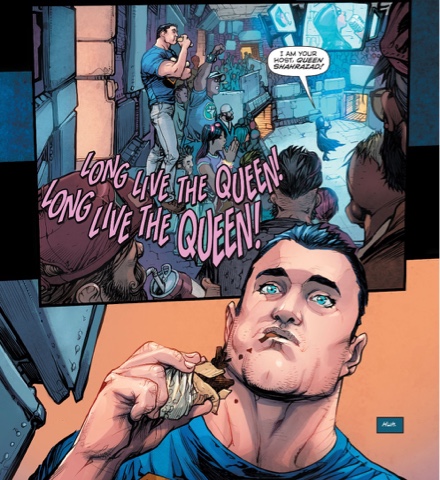 The fighter-god designs are a treat, whether it’s Mexican wrestler-inspired Haimosu, moon deity Mayari, MC Shahrazad or warrior sun god Apolaki. Hi-Fi Designs provide eye-catching colour schemes, typical of the work they do throughout. I’d like to see more of the Filipino pantheon, as their looks and backstory make them more interesting than the one-shot adversaries they might otherwise be.
Romita provides the cover, with regular inking partner Klaus Janson and colourist Dean White, and it’s a terrific summation of everything that’s wrong with the current Superman direction. He’s angry, tense, brooding, physically and mentally in a dark place.
I’m not keen.
All in all, this is a definite uptick in quality. If Yang keeps improving Clark’s attitude, and Porter hangs around, we could be in for a good few issues. And after the last few months, I never thought I’d be saying that.