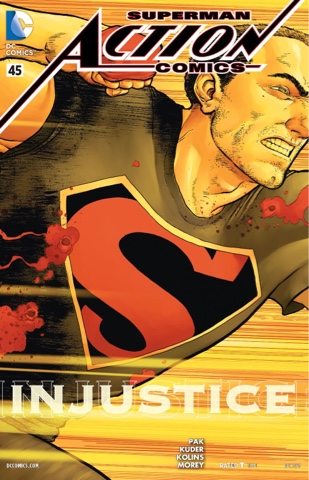 Superman is very much in action as this issue opens, saving fishermen from a hurricane before providing much-needed shelter for other victims. But even as we see him doing what a Superman does, helping the helpless, a TV commentary tells us that since being outed as Clark Kent and an extraterrestrial, fewer than one in four people polled support him

We soon learn that since last issue Clark has been living in Talladega, Alabama, working as a laundry collector to get him into a tech company connected to Metropolis’s mayor, aka Wrath, one of the shady enemies behind his recent woes. He has a hideaway in which he’s collating information to learn the extent and nature of the conspiracy against him. And he has a valuable ally when Hiro, the Toymaster, shows up with an offer of assistance. So what does Superman do? 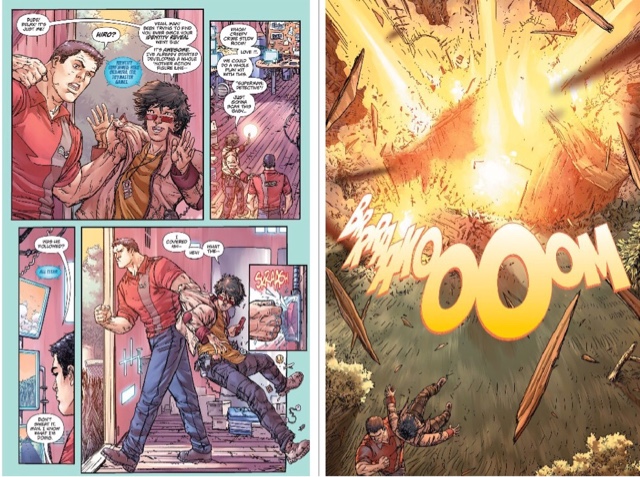 This is a tale of two Supermen as the Truth story continues to give Action Comics its focus. Seeing Clark has been bringing his investigative skills to bear cheered me. A moment in which he helps out a waitress being bullied without giving into the anger that feeds Wrath made me smile.
But petulantly blowing up his bargain basement Fortress of Solitude, pushing Hiro around like a bag of rubbish, this isn’t Superman, it’s the same dumb meathead who’s usurped the Superman titles for the last few months. Just when it seems we’re moving forward, that Superman is remembering how to be a hero, he regresses. When Superman tells Hiro why he, supposedly, can’t be around him, Hiro points out that the argument is bull.

Yet still Superman, rather than embrace a hugely competent ally – a technical genius of near-Luthor level, almost certainly able to infiltrate tech firm Lyfegene more easily then Clark – sends Hiro away with his tail between his legs. Hiro’s so smart that I don’t believe for one minute he’s on his way back to Gotham City, as Superman’s monitors reckon; he’ll likely be back soon to provide aid, whether wanted or not. But that’s beside the point – having already treated Lois and Wonder Woman like dirt, Superman once again kicks a capable friend to the kerb. Frankly, it’s getting hard to root for the man.
Superman isn’t the only person kicking against established character here.

I’ve previously defended recent portrayals of Perry White as acceptable – someone he trusted has, technically, been lying to him and putting colleagues in danger… but come on, a night or two’s sleep and the old newsman should have developed some understanding of Clark’s situation. Instead, we’re meant to believe one of Clark’s wisest, oldest friends – who only a few months ago was acting like a father to him – suddenly can’t see the man for his actions.
Personalities are being twisted to serve the overall story running through/infecting the Superman group, to crank up the melodrama, and it’s so unnecessary – writers Grek Pak and Aaron Kuder are smart enough to give us terrific Superman stories that serve both character and plot. It seems, though, that they’re meeting the demands of some ill-advised editorial memo. I wonder if this moment is them winking at us, letting us know they, too, don’t believe people would so readily turn against Superman. 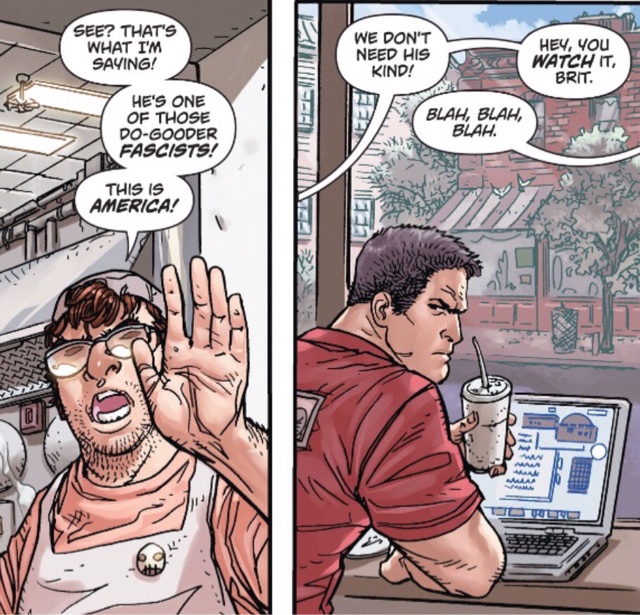 One of the better aspects of this issue is that it does move Superman closer to Wrath’s motivation as he uncovers horror at Lyfegene. Superman is, though, in a bit of a mess at the end, and it’s one he’d likely have avoided had he accepted Hiro’s help. Will he learn a lesson? At this point, I’m guessing not. 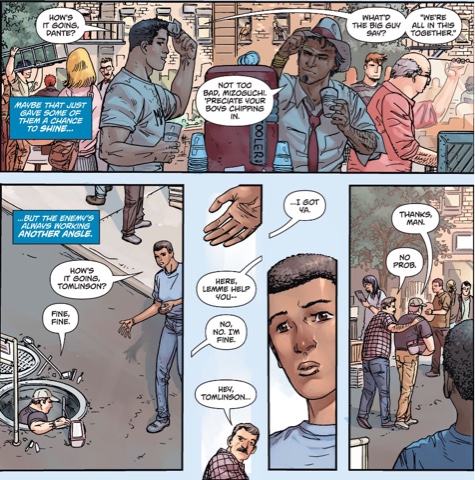 There’s a scene back at Clinton Street, as Clark’s neighbours rebuild after recent events, aided by one of the policemen who was ordered to arrest Superman. Like firefighter Lee Lambert and the flamboyant Dante, Officer Mizoguchi is apparently being promoted from bit player to supporting cast. Which is nice, but I wish we were seeing something of Lois in this book, and Jimmy, Lana, Cat and John Henry, the people I already know and like.

I also wish that Clark were allowed to be the wordsmith he’s meant to be, rather than a Kansas Hulk.
Better is the neatness of Clark knitting literal plot threads together while pretending to be collecting dirty laundry. And I like that as in the ‘Smallvillains’ arc, Pak and Kuder set Superman against a tiny town hiding a secret – it’s a convention that always works.
Something else that never fails is Scott Kolins’ artwork – if Kuder needs someone to spot him, I’m always glad to see the former Flash artist come on board. Kolins has a knack for naturalism which grounds the fantastical elements, posing a fighting-mad, dynamic Superman against a pastoral America makes the script pop. Plus, he actually has Clark smile when he’s doing good deeds at Lyfegene, there’s a reveal towards the end that is suitably horrible, and Clark looks splendid in his (Curt?) Swan workshirt. Well, apart from here: 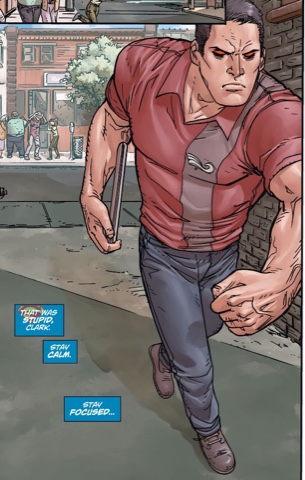 The supposed hero looks terrifying, more like a shambling monster than a guy who’s just done something nice without resorting to violence. And the blazing red eyes are, by now, beyond cliche.
The good-looking colourwork is by Tomeu Morey, the lavish letters come courtesy of Steve Wands, while Kuder donates the superb main cover, and Dave Johnson the poster-ready Monsters of the Month variant. 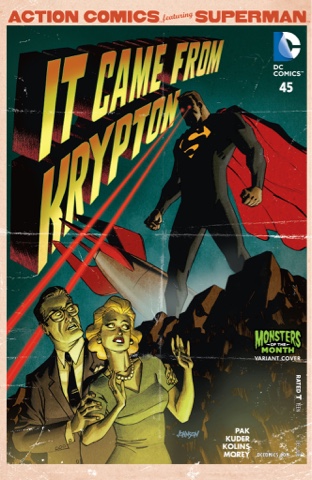 Action Comics #45 is a great-looking package, its weaker elements the result of editorial trying to force the happy square peg that is Superman into a Marvel-shaped round hole. Give up, DC, it’s just not working – let Superman be Superman.