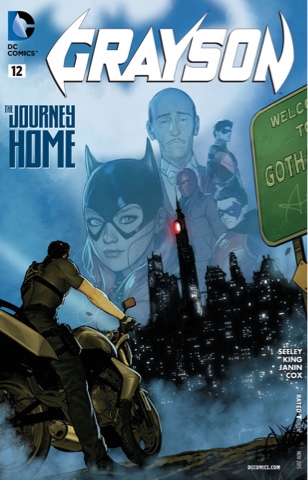 It’s fair to say this is the issue I’ve been waiting for, as Dick Grayson returns to Gotham City and lets his friends know he’s alive. Well, all except Bruce Wayne, who’s currently a new man, free of any memory of his life as Batman. That situation makes for a compelling opening scene as Dick, wearing a blond wig and beard as ‘Mr Sparrow’, asks the new Bruce if he’s happy. Reborn Bruce has no idea he’s sitting opposite the person who was for years his pseudo-son and crimefighting partner. 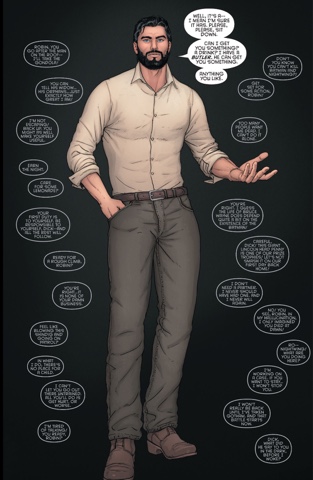 They’re interrupted by a Spyral agent who insists, rather forcefully, that Dick return to the bosom of the espionage organisation. If he doesn’t, she’ll tell the world that Bruce is – well, was – Batman. The agent, unidentifiable due to Spyral’s Hypnos tech, gives him one day to say his goodbyes.
Cue encounters with Red Robin and Red Hood, Batgirl and Robin, AKA Tim, Jason, Babs and Damian. There’s a lot of anger that Dick allowed Bruce, still Batman at that point, to tell them he’d died at the hands of Lex Luthor – but one of them gives him a great big, forgiving hug.
This is a typically brilliant comic from writers Tim Seeley and Tom King, artist Mikel Janín and the rest of the creative team. The encounters between the Batman Family members gain depth and resonance by the writers’ inclusion of dozens of dialogue bites plucked from Dick’s lengthy comics history. Seeing how many you can identify makes for a fun game, without distracting from the thrust of the issue. Will Dick return to Spyral or will he make good on his plan to turn his back on the shady group? Have his bonds with the men he thinks of as his brothers, the woman he once loved, been broken beyond repair? 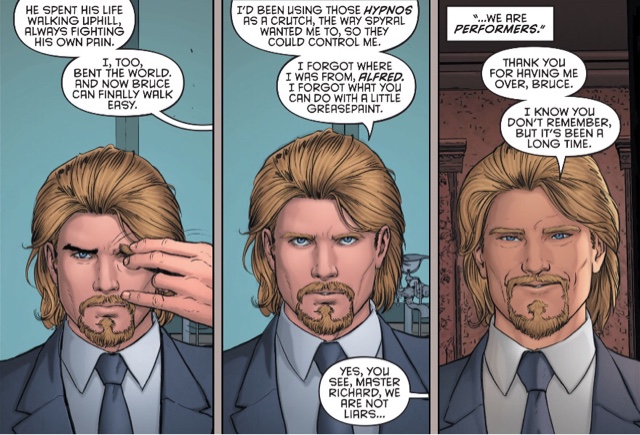 Seeley and King deserve extra kudos for pointing out something that had never hit me in >cough cough< years of reading about Dick Grayson and Alfred Pennyworth – their shared performing background. I knew Dick had been an aerialist, that Alfred trained for the stage, but I'd never considered that the coincidence would bond them. As the script points out, both continued to perform despite joining Batman's crusade – one as wise-cracking Boy Wonder, the other as faithful  manservant. It's rather wonderful to gain new insight into characters after decades of reading about them, via story points that are natural rather than contrived.
I shivered at this panel.

I hate the miserable git Tim Drake became in the post-Flashpoint DC Universe, but King – he’s writing the script, having plotted with Seeley – gives us a powerfully sad moment using the hand he’s been dealt.
And despite his professed contentment, there’s a massive melancholy to Bruce that perfectly connects to Scott Snyder’s characterisation over in the Batman series.
There’s even a bit of fun for lovers of British steamed puddings… but that would be a spoiler too many.
Janín’s storytelling is exemplary. Mainly static scenes, such as Mr Sparrow’s meeting with Bruce, crackle with quiet drama, while the fight scenes are mini-masterpieces of choreography. It’s a treat to see him draw Batgirl and the Robins; it’s especially impressive that he finds a convincing middle ground between the thoroughly adult Babs who flirted with Dick for years, and the current teenybopper in DMs. And I love that he’s dug up one of Dick’s old New Teen Titans disguises. 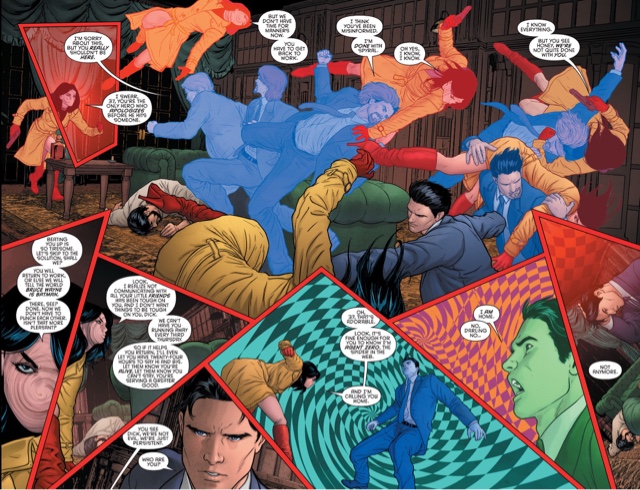 Janín provides pencils and greytones, and some inks, with Hugh Petrus and Juan Castro also pitching in on finishes. Jeromy Cox supplies the rich, moody colours, with the big fight spread showing his intelligent eye for making a scene pop. Letterer Carlos M Mangual merits a bonus for all those flashback word balloons. Rebecca Taylor edits, Mark Doyle oversees and I’d like to thank every one of them for ‘A Fine Performance’.
Take a bow.