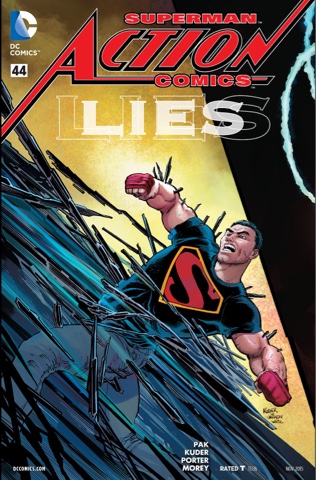 The battle for Clark Kent’s neighbourhood continues, with the Mayor revealed as the force behind the shadow demons plaguing our hero. Her influence extends, taking over some of the ordinary people who have been standing behind Superman, causing them to turn on their fellows. But when the inky darkness hits Superman’s new firefighter friend Lee, things take a surprising turn.

There’s not a great deal to comment on this issue, I’ve said it all previously. Aaron Kuder’s artwork hits new peaks, with explosive action served by jagged layouts, and pinch-hitter Howard Porter following his cues with style and gusto. Greg Pak’s script is pacy, efficient, delivering a solid read, but there’s nothing earth-shattering here. Superman finally realises his anger has been feeding the beast, we see that the Mayor – now named Wrath, just because – can influence people’s minds, and while there’s a bit of a victory for Superman and friends, she retreats to rally more bad guys. The story goes on…

… and on. Enjoyable as this all is, it’s very much a case of ‘for what it is’. And what it is seems to be a big old filler, something to keep the comic going while we’re in the midst of the depowered Superman period. Quality-wise, Action Comics continues to be the best Superman title, certainly to be recommended above the supposed flagship book. For one thing, it’s the only one which actually shows Superman still has the ability to inspire. 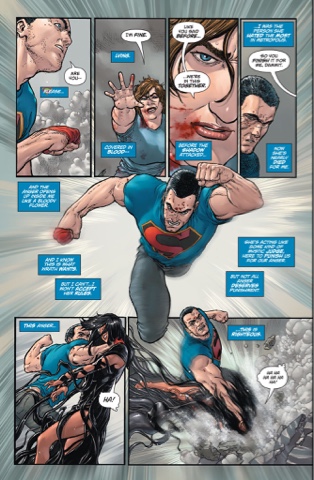 But I just wish Pak and Kuder were able to move onto something new. Issue after issue of Superman and shadow demons bashing one another, even with the welcome addition of new characters Lee and Dante, is getting rather wearying. The creators have the talent and enthusiasm to do amazing things with this series, but they seem to have been locked into a holding pattern. I hope they escape it soon.