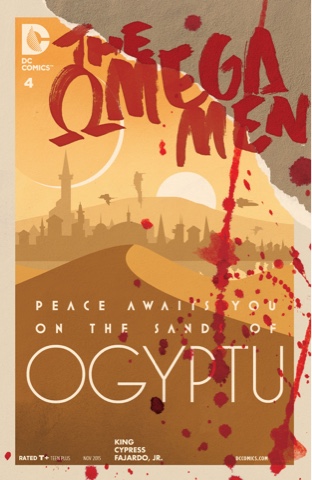 Four issues in and The Omega Men is proving to be perhaps DC’s most challenging title, and certainly one of its most rewarding. The story of a band of freedom fighters out to liberate the Vega space sector from the oppressive Citadel, it’s not into exposition dumps and big battles. The action is as much about mental as physical muscles, with character at the heart of the narrative. Last issue we were introduced to Kalista, sword-slinging scion of a royal family installed on one of the subjugated worlds and much more than she seems. By the end of the chapter she’d been taken by the Omega Men and dumped in a cell alongside existing prisoner Kyle Rayner.

This time, Kalista’s presence elicits Kyle’s story, of how an ordinary Earthman was given an all-powerful weapon not because he was special, but because he was in the right place at the right time. Or wrong, when you consider that his becoming a Green Lantern quickly led to the murder of his girlfriend, a life of unending conflict and today, when his bid to solve the impasse between the Citadel and the Omega Men has resulted in his being in chains, without weapon but with a bomb in his neck.

Along the way, we learn more about Kalista and what makes her tick, while Primus and his Omega Men monitor the encounter, for reasons I won’t spoil. 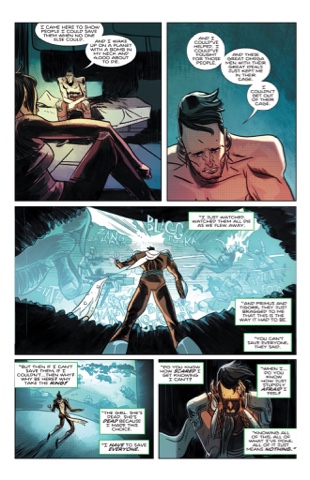 I won’t spoil because this is the twistiest, turniest mainstream comic book since Kurt Busiek’s Thunderbolts, sprinkled with intriguing reversals of expectation. Issue by issue, we’re learning about a part of the DC Universe not patronised by the likes of the JLA. This doesn’t seem to be a place for heroes, it’s somewhere for bad guys and slightly less-bad guys – or can Kyle prove otherwise? I’m delighted to see my favourite Green Lantern, a rich character sidelined by DC Comics when Hal Jordan returned from the dead, back as more than just another Corps member. In putting him at the centre of the story, writer Tom King provides a fixed moral point, someone we know isn’t perfect, but who is going to question the Omega Men’s willingness to join their opponents in the gutter.

It’s funny, ‘drip-feeding’ tends to be used as a pejorative, but King is laying out his story with commendable deliberation, ensuring each info gobbet contributing to the big picture is something to relish. 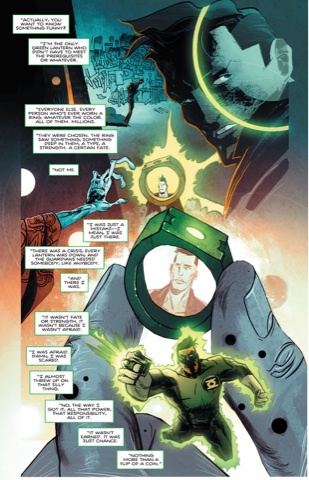 Regular artist Barnaby Bagenda has an issue off, but fill-in Toby Cypress eases us into his own style by starting with the usual grid format and, little by little, exploding outwards. Faces and forms are longer, more exaggerated – and it works. Cypress is particularly good at capturing the innocence of Kyle – he’s an experienced hero, and no fool, but is always looking for the good in a person or situation. And Kyle’s past gains a weird new vibe under Cypress’ hand, with, for example, cuddly Guardian Ganthet becoming something akin to a War of the Worlds alien. The art is coloured, as ever, by Romulo Fajarda Jr, whose muted tones lend a sense of the everyday to the fantastical. Add in the sharp lettering of Pat Brosseau and a sly cover by Trevor Hutchison and you have all the ingredients for a satisfying, quality read.

If you’ve not tried this series yet, give it a look – it’s smart, engrossing, a space thriller for the 21st century … and beyond.