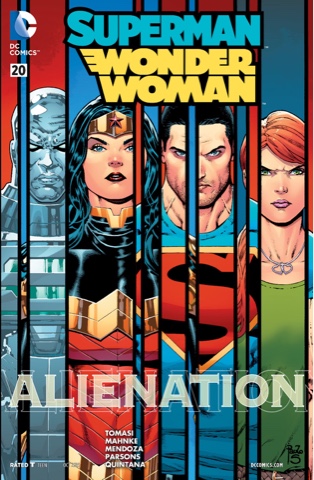 Superman has burst into the White House, furious that the US Government has torn his hometown apart in the wake of his other life as Clark Kent being revealed to the world. The authorities have kidnapped his Daily Planet colleagues and Smallville neighbours. Wonder Woman isn’t going to let them stay behind bars. And the Parasite attacks. 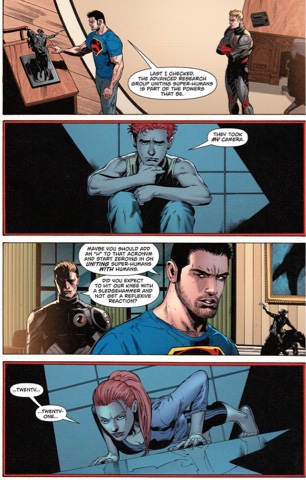 In page time, while Diana was front and centre with Clark last month, this instalment is mostly the Man of Steel’s show. Watching him calmly move around the Oval Office, as items of presidential decor take on an ironic bent, and we get insets of how his kidnapped pals are doing, makes for good, subtle drama. 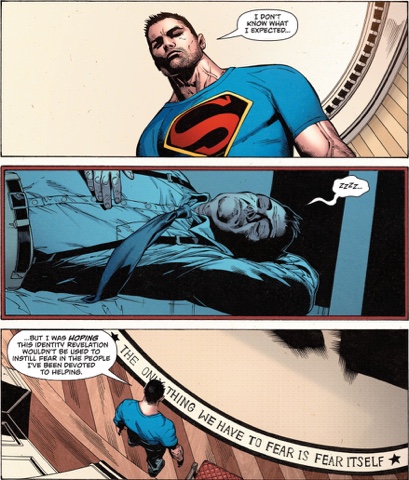 His conversation with government stooge Steve Trevor is well-handled by writer Peter Tomasi. Admittedly, the Government’s point of view that Superman has done something terrible in having a secret identity makes no sense.

What, exactly, is their problem? Did Superman ever say he used no other name? He presents as a hero and that’s what he has always tried to be, a friend to America and the rest of the world. Yes, the Government could have issues with Superman being a vigilante, but evidently they don’t. Instead, Trevor – who really is better than this – comes across like a silly kid, pouting because he isn’t privy to a secret. It’s not stated, but jealousy that Diana, whom he loves, is with Superman could be a factor in his really going for the hero. Then, having Barack Obama enter the story and spout the same line as Trevor makes him seem an ungrateful louse. This isn’t Civil War period Marvel Comics, why the heck should a superhero having a private life matter to the people of the DCU? They don’t actually pay him to save their ungrateful backsides 24/7. 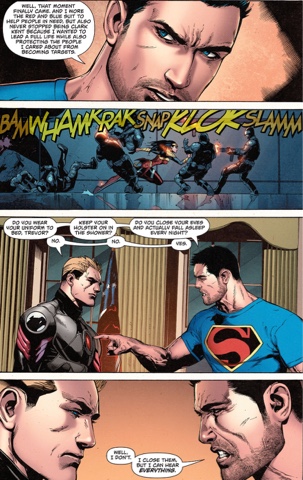 All that said, Superman’s speech is superb, and logically should bring an end to the Truth storyline. Oh, if only…

The varied reactions of Superman’s friends to being abducted and imprisoned by their own country, having committed no crime, is enlightening and heartening. Lois, defiant. Jimmy, confused. Steel, serene. Lana goes full-on Linda Hamilton.

And in the later vignettes, in which they’re interrogated, Clark’s old schoolteacher, Mrs Takahara, is a particular delight, while neighbour Mr Santiago is my new hero.

This part of the book, though, did produce the saddest, most pathetic moment – Jimmy’s response to questioning by Government goons. Please, Jimmy isn’t this much of a sad sack.

Interspersed with the interviews is Superman’s battle with Parasite on the White House lawn, a powerful back-and-forth superbly choreographed by penciler Doug Mahnke. The artist is Tomasi’s perfect partner, conveying the dynamism of the fight scenes and nuance of the character moments. As inked by Jaime Mendoza and Sean Parsons, and coloured by Wil Quintana, this is a fine-looking comic. Letterer Rob Leigh also makes a worthwhile contribution. 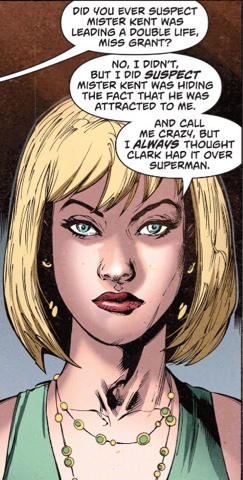 It’s interesting to see that Cat Grant is here presented as a little older, a lot slimmer than previously – I think Mahnke is giving her a Calista Flockhart vibe in preparation for the arrival of Supergirl’s TV series. And the dialogue of Tomasi – still using that weird ‘story and words’ credit – is a hoot.
Diana’s presence in the issue is smaller than might be expected of a book with her name in the title, but it’s important. She storms 1600 Pennsylvania Avenue in impressive style, and rather than whisk Lois, Jimmy, Mrs Takahara and co away, persuades them to give the Government spooks what they want – their opinion of Superman’s trustworthiness. Diana is smart enough to know the Government won’t stop if she simply busts them out and runs, so as they’re there already, why not let those who know him vouch for his veracity? In a nice cliffhanger, Lois is last up, and it’s only as she’s about to begin her testimony that we see just why Superman’s pals are voicing private doubts they might otherwise keep to themselves – they’re encircled by Diana’s Lasso of Truth. Suddenly that weird moment with Jimmy makes sense – that really is the worst he can think of Superman when compelled to look to the depths of his soul. Sorry Government, you’re not going to get this bunch to condemn the Man of Steel. Tomasi has come up with a splendidly logical way to involve Diana – she has faith in Superman, she has trust in his friends not to throw him to the wolves, and she has the means to back up her belief.

The main cover by Paulo Siqueira and colour house Hi-Fi is a little dull, another of the ‘worried heads’ images Truth is giving us – I’d much rather see a straightforward, punchy image of Superman and Parasite fighting in front of Obama (who’s looking a tad young throughout, but perhaps Mahnke is out to sell the original art to POTUS). 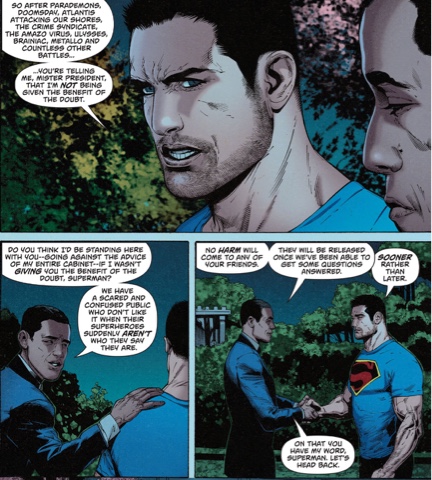 All in all, this is one of the best chapters of the Truth sequence running through the various titles featuring Superman. Tomasi, Mahnke and friends combine to produce a narratively and visually compelling superhero comic, one that uses the current Diana/Clark relationship to good storytelling effect.

All this, plus another wonderful Bombshells variant cover, from Terry and Rachel Dodson. 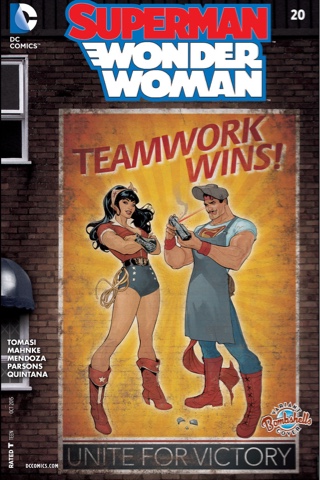