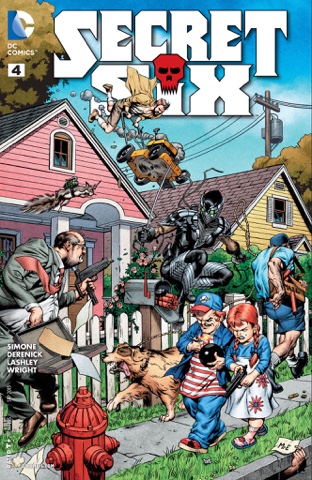 Last issue we saw how the new Secret Six members were coping with hiding out from Mockingbird in suburbia. This time we see how they got there. Blame some unavoidable production schedule shuffling after the just-launched book went awol for months. Happily, last issue was a hugely entertaining done-in-one, and this issue follows suit. Both add to the larger story with great style.

Having escaped from the mysterious Mockingbird’s undersea prison, our anti-heroes are looking for space to breathe. The dark canyons of Gotham are deemed too dangerous so Big Shot takes his five new friends somewhere they find even more unsettling – his picture-perfect, picket-fenced home. But Mockingbird’s retrieval crew is tailing them, and confrontation is inevitable.

The revelations are coming thick and fast. Last issue – which, timeline-wise, is next issue – we learned that Mockingbird is the Riddler, and Big Shot is … Ralph Dibny, the Elongated Man. This time we see that Bob Fosse-themed shattery woman Porcelain is gender fluid. And bit by bit, as Mockingbird’s three masked aides battle the Six and lose their disguises, we learn that they’re …

… ah, but that would be spoiling a big part of the fun of the issue. Let’s just say that pre-New 52 Secret Six fans will likely be smiling.

I was smiling at the prediction that one of the new Six will soon be popping their clogs. Not very nice, I admit, but there are a couple of members I’ve simply not taken to – the Ventriloquist and her doll Ferdie, who can’t open his mouth without coming out with some tiresome sex-related comment. He’s a bargain basement Ragdoll without the physical usefulness. So if writer Gail Simone fancies killing him/them, that would leave room for a new member of the team, and better still, a Ventriloquist for the Batman books who’s closer to the classic Alan Grant/Norm Breyfogle version.

Until recently, former Court of Owl lackey Strix would’ve been on my personal kill list, but she’s growing on me – I mean, look at her in this scene. Awwww. 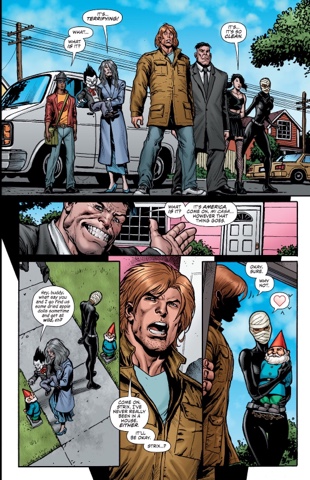 Despite the huge dodgieness of the Six’s morality, Simone brings a real feeling of family to the book, with Big Shot and Catman as Mom and Dad; I can’t wait until the inevitable revelation of Ralph’s betrayal shatters the nascent team.

Given a reflection at the end of last/next issue, it seems somebody already knows he’s a traitor. And hopefully his being outed will bring with it news of what happened to Ralph’s wife, Sue, in this revised reality. Please God the horrible Identity Crisis isn’t still in continuity… hopefully she’s simply safe somewhere while Ralph is undercover. She’s never far from Ralph’s mind this issue, which is sweet, but may also prove heartbreaking.

Ken Lashley, who drew the first couple of issues, provides art for the opening eight pages, while Tom Derenick handles the rest. Colourist Jason Wright is on hand throughout to keep everyone the correct hue, but the difference is certainly large. It’s not inappropriate, mind, with Lashley handling Gotham City, and Derenick its suburbs. Two locations, two artists, two moods. Derenick is a better fit for the book generally, his lighter style contrasting with the characters’ inherent blackness in a way that just works. Longtime Six colourist Wright’s efforts are always spot-on, while the return of one pre-New 52 character lets letterer Travis Lanham break out a familiar font.

And that cover. Wow. Dale Eaglesham gives us an instant classic, full of the goofy darkness that characterises this series. He even – unless it’s a nod to a DC spooky guy – gives himself a tiny cameo.

Secret Six scratches an itch like no other DC title, and I’m so pleased to see it back on a monthly basis.