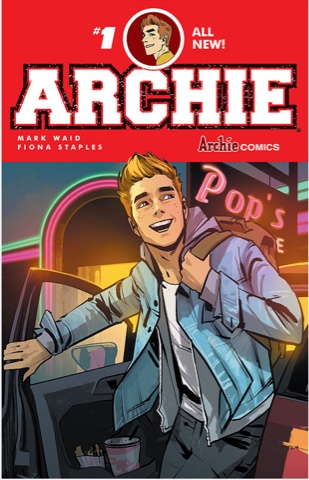 Teenage sweethearts Archie Andrews and Betty Cooper have broken up. Their friends contrive to get them back together … all except Jughead.
And that’s the simple, but engaging, plot of the first instalment of the Archie revamp. Writer Mark Waid and artist Fiona Staples update the Riverdale gang, making the humour less gag and slapstick based, more naturalistic. The approach works well, with the characters of Archie and friends recognisable while seeming just a tad more likely to exist. One big piece of information, the reason for the split, is denied us, and I’ll certainly be back next time in the hope of learning all. Those fiends. The only thing I don’t like is the talking to ‘camera’. Archie breaks the fourth wall as the comic places us in the position of Riverdale newcomer, explaining what’s going on rather than simply showing us. Outside of She-Hulk, I dislike being talked to by comic book characters almost as much as I hate moralising narrators on TV shows. And there really is no need – Waid and Staples are both experienced, stylish storytellers, and I can’t believe anyone is coming to the issue without knowing the basic set-up. Hopefully the device will be dropped even quicker than original Archie dropped his insistence on being called ‘Chick’, as seen in the back-up reprint of Archie’s Forties debut.
Plus, it confuses the action – take the scene above, which really shows off Staples’ skill with ‘acting’. On the one hand, of course Betty can’t hear Archie, his dialogue is there to draw the reader in; on the other, she’s in the scene with him, why can’t she hear it? Who’s to say they’ve not broken up because he suddenly has imaginary friends?
Staples does a bang-up job throughout of making the characters a little less cartoony than the classic look – which I still love to bits – while utterly familiar. It’s only Archie who doesn’t look quite right, what with the crisscross hair design being mostly absent, the cool new flick, the loss of his snub nose… ah well, either these things will be tweaked, or I’ll get used to them. Heck, they tell me Superman is in a tee shirt and jeans …
This is a fun, effective rebirth for Archie. I don’t know if it’ll stick, but I’d be thrilled to hear the Riverdale folk are connecting with a fresh generation.