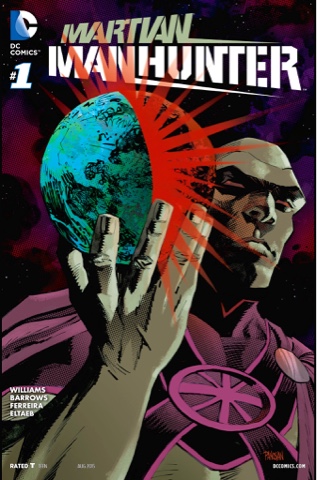 Who is J’onn Jonzz? Is he a friendly Justice Leaguer? A Martian weapon of planetary destruction? A gnarled old monster who does magic tricks for food?

This title from the new DC shows that he could be all three, as writer Rob Williams and penciller Eddy Barrows give us a fresh take on one of the first superheroes of the Silver Age. The book opens with an introduction to Mr Biscuits, who snoozes in an abandoned building – looking like a cross between the Joker and a very large frog – until a brave little girl shows her friends he’s not as unapproachable as he looks. 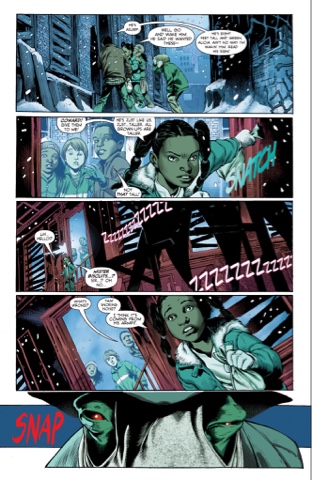 Elsewhere, we see J’onn J’onnz combine some of his many powers to save the people on a falling plane, only to be faced with a mental projection of another Martian claiming he’s on Earth as the herald of an invasion. 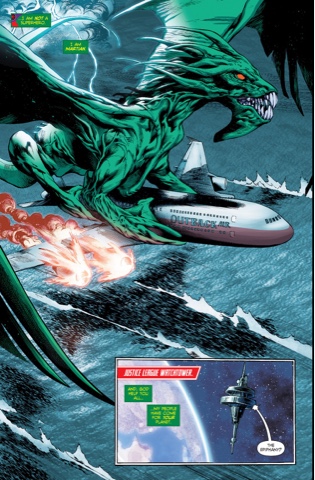 Cut to Dubai, where a daring cat burglar finds that the world is a lot stranger, and scarier, than she thought – but has she a dark secret of her own?

And in Washington DC, jaded FBI Agent Wessel is called to an impossible murder which presages a convergence of worldwide terror attacks termed The Epiphany.
Williams turns in a script that’s tense, mysterious, funny and just darn intriguing. I can’t imagine anyone reading this issue and not wanting to know more. I’m a big fan of J’onn being presented as one of the saner superheroes, but he’s been a bit all over the shop in the post-2011 DC Universe, so who knows, he may well be a Martian sleeper agent without ever knowing it. I hope not, but if that is the case, I trust he’ll rise above it. Meanwhile, I want to know how Mr Biscuits fits in – Williams is British, so that’s ‘biscuits’ as in ‘cookies’ rather than things you serve with gravy. Is this a wink to J’onn’s onetime Oreos habit? Is Mr Biscuits another Martian, one who’s lost his mind? The mastermind behind the Epiphany? Colour me as curious as J’onn is green. 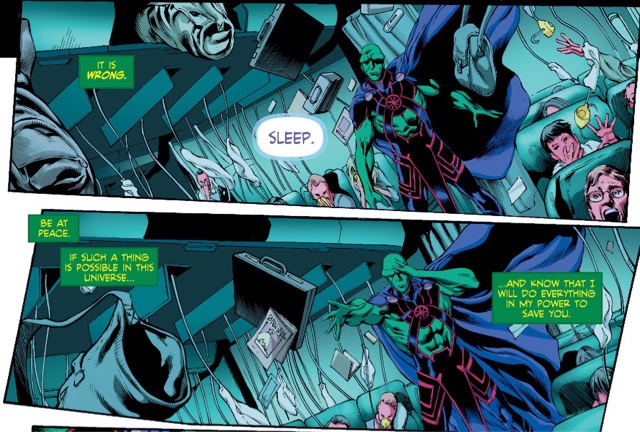 Also deserving of a lot of credit for this debut working so well is penciller Eddy Barrows, who piles on the dynamism and darkness, giving us a corner of the DC Universe that’s full of monsters, both human and extraterrestrial. Standout moments include J’onn’s plane-saving turn as a dragon, the intensity of the Washington killer and, well, every page featuring Mr Biscuits. The longtime DC contributor’s layouts are wilder than I’m used to, and they work supremely well. Inker Eber Ferreira and colourist Gabe Eltaeb also play a big part in layering the visual intensity. Ferreira gives us inky blackness without obfuscation, while Eltaeb lights such locales as Dubai and DC for maximum mood. And letterer Tom Napolitano’s work is as understated as it is effective.

Add in the elegant regular cover by Dan Panosian and the variant/digital extra by Eric Canete – which is properly freaky – and you have a great-looking package. The only thing I don’t like is the logo; I suspect its two words are at jarring angles to one another to reflect the unease of the book, but the result just looks wonky.
If you’ve been wondering whether to try this new series, I’d say dive right in – it’s a beautifully illustrated superhero thriller that could build into something very special indeed.