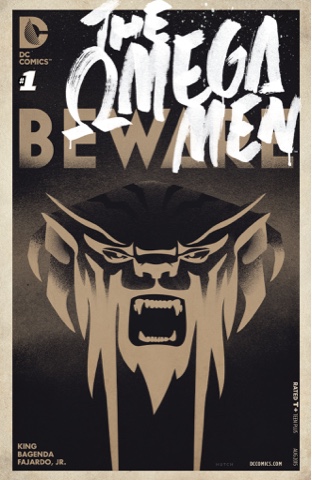 There’s a revolution going on. A disparate band of rebels, the Omega Men, are taking on the oppressive Citadel – by any means necessary.

Of all DC’s recent Sneak Peeks, the Omega Men was the most disturbing, with Light Green Lantern Kyle Rayner apparently executed live on space-TV by Omega Man Tigorr. This debut issue of the series shows us what happens next.

And it’s messy, as a super-creepy squad of Citadel soldiers searching for Tigorr are taken down by the Omega Men. While the pages on which the rebels appear are few, we get a feel for the core team: pacifist Primus, pragmatist Tigorr, scrappy Scrapps and so on.

The presentation is challenging, with writer Tom King interspersing English dialogue with alien language, and information presented in gobbets we’re invited to put together to get the big picture. Artist Barnaby Bagenda’s use of nine-panel grids ensures the occasional full-page image makes a bigger splash. All of this together has me thinking that someone is a fan of the ‘Five Year Gap’ Legion of Super-Heroes, the divisive, ahead-of-its-time run by Keith Giffen, Tom and Mary Bierbaum and Al Gordon that redefined what a DC Comic could be. The approach should prove less challenging to today’s readers, used to being treated as participants rather than passive receivers of information, than it was to potential buyers in the late Eighties/early Nineties.

It took me a few pages to get into the rhythm of the book – literally, as it turned out, given that towards the end Scrapps bursts into a tone-setting song. The juxtaposition of the verse – which has me thinking Negro spiritual – with the cinematic approach of Bagenda works brilliantly, as strong guy Broot steps over the bloodied bodies of the fallen. And it all leads to the satisfying final page reveal of the ‘bomb’ that the Omega Men have been protecting. 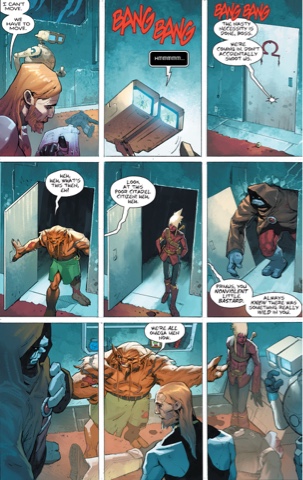 I’m intrigued by King’s lateral approach to the narrative, and the atmospheric art of Bagenda – filled with characters who look like they’ve had tough lives before we meet them – is terrific. Romulo Fajardo Jr is a huge asset to the series, with his dialled down colour choices – no cosmic Crayolas here – while Pat Brosseau deserves a bonus for lettering above and beyond the call of duty – all those extraterrestrial glyphs! A nice touch is that the credits dedicate this issue to Roger Slifer, writer of DC’s original Omega Men series, who died recently. 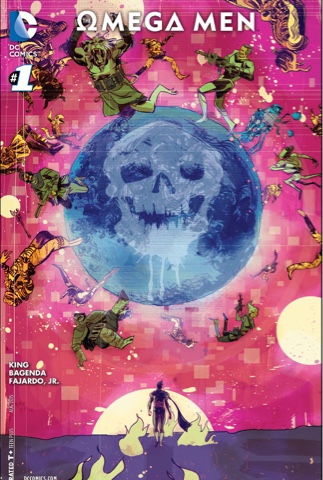 One great thing about this week is that digital buyers are finally getting the variant covers thrown into the package, meaning that as well as Trevor Hutchison’s evocative poster-like main image, I can enjoy Toby Cypress’s differently glorious alternate.

King, Bagenda and co – including editors Amedeo Turturro, Andy Khouri and Brian Cunningham – deserve credit for a confident, well-crafted first issue. Omega Men has its own identity right out of the gate, and I look forward to seeing where the rebels go next.