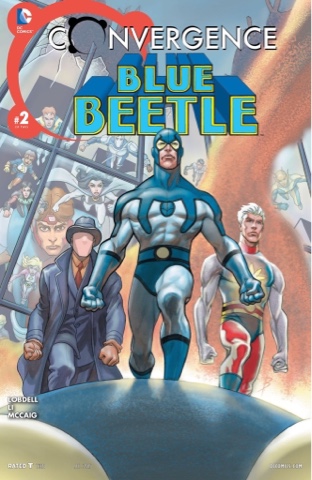 Telos has decreed that Earth 4’s Blue Beetle, Captain Atom and the Question battle the post-Zero Hour Legion of Super-Heroes. The LSH appear over Hub City, a couple of dozen of them compared to the three resident heroes, only one of whom has actual super-powers. Legion leader Cosmic Boy seems ready to talk things out, but Blue Beetle just wants the LSH to surrender.

Stalemate. The Hub heroes retreat to Beetle’s Bug, where assistant Tracy has used his hi-tech equipment to hack the Legion members’ flight rings, gleaning information about their powers. Beetle reckons that if his colleagues can keep the 31st century’s greatest super-teens off his back for six minutes he can come up with a plan.
They can, and he does, managing to enlist the aid of three Legion members to fool Telos into thinking someone has won, and someone has lost, so satisfying the rules he’s laid down. Given the Legionnaires Beetle teams up with include Saturn Girl and Sensor, seasoned Legion fans will guess that some mentally boosted illusion casting is involved.
But newer readers, perhaps those who are fans of Blue Beetle, Captain Atom and the Question? Good luck with that, kids, as writer Scott Lobdell doesn’t set things up by demonstrating the Legion women’s powers beforehand. He doesn’t have them listed by the headshots on the Bug’s screens. He doesn’t even have Beetle explain what’s happened after the fact.
It’s pretty slack writing. As for the third Legionnaire involved, Computo, even this longtime Legion fan has no idea why the resident computer-communicator is needed. 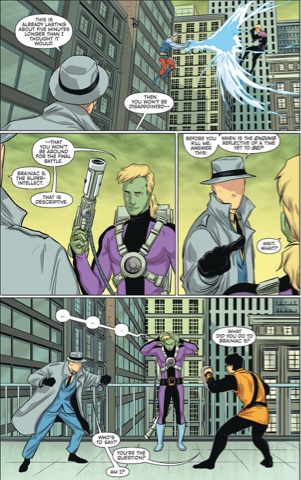 And the story was going so well. Lobdell remembers such stuff as Cos being a history buff, throws in a cute dog for the sake of a great pun, uses the Question wonderfully against the computer-minded Brainiac 5 and gives Saturn Girl a joke, something she’s not had since about 1963. And the basic plot works just fine: having Legionnaires prove necessary for Blue Beetle and pals to be able to get one over on the (rest of the) Legion is a great way to avoid accusations of ‘jobbing’. 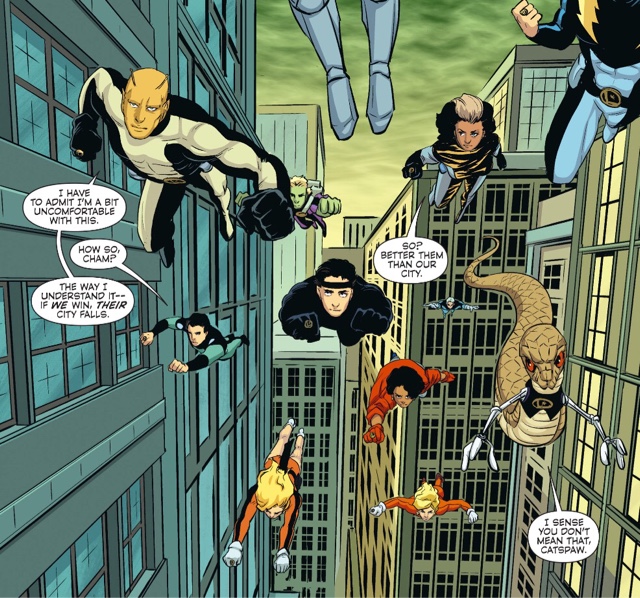 As for the art, the pencils and inks of Lishan Yi are just stupendous – the characters look elegant and powerful, the backgrounds are brilliant, the compositions are gorgeous, the storytelling superb … she actually takes the time to have Legion members in different postures when flying, you know, like actual people. Where has this excellent comic artist been hiding? Gotta Google…

… Edinburgh. Where I’ve been living for 16 years. Oh.
Anyway, it seems my neighbour has been doing lots of manga work, and international comics, things I don’t follow. So, selfishly, could someone please ask Yi to do more superhero comics? The look of this book is so refreshing while keeping everyone on model. 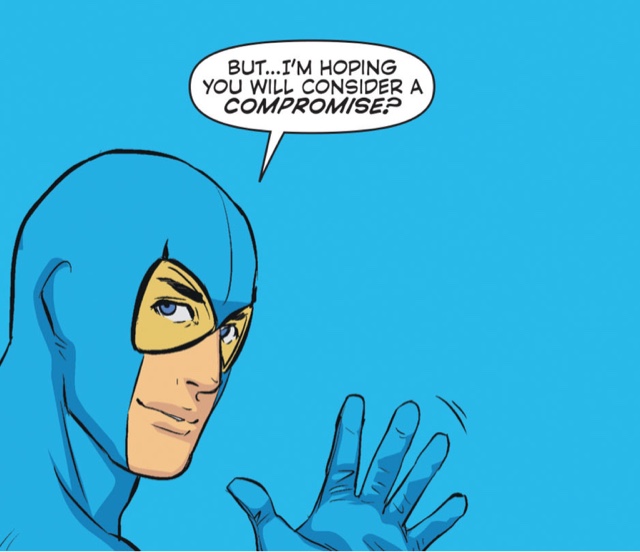 Dave McCaig skilfully colours Yi’s work – for example, toning a rare background-free scene to match the character contained within turns a simple panel into Pop Art. Saida Temofonte does a splendid job with the lettering, Bret Blevins gifts us a knockout cover, and all in all I’m a happy bunny.

If not for the casual ignoring of pretty basic information this would be a perfect issue. As it is, well, it’s entertained hugely and whet my appetite for a new Legion series, which was already pretty massive after the recent Justice League United team-up. And given how much the team has appeared in Convergence, it seems safe to assume DC is open to the idea. Let’s hope sales and reader response to this and the other tie-ins featuring the Legion merit a new book, and that when it shows up we get creators of the calibre of Lishan Yi, JLU’s Neil Edwards and Scott Lobdell on a day when he’s paying more attention to the needs of the audience. 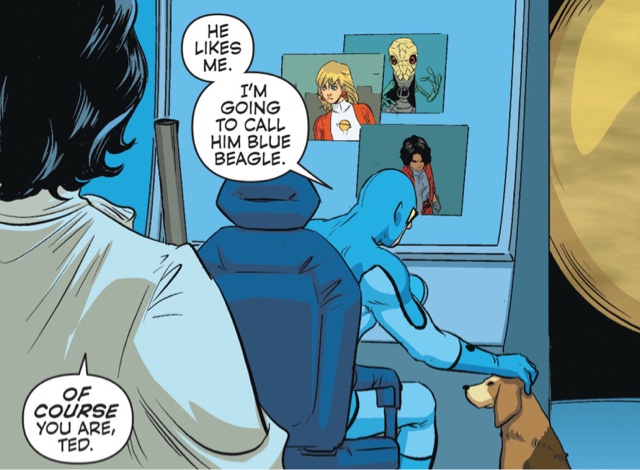