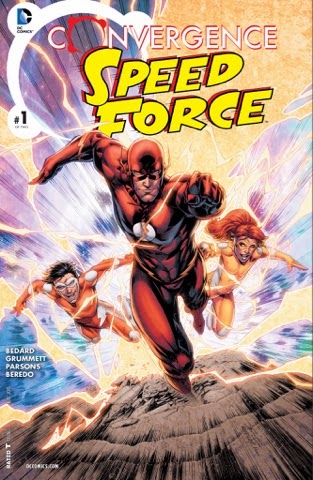 Can you hear me Tony Bedard? Because I’m clapping. Applauding you for the single best Convergence tie-in of the week.

If anyone hasn’t read it, here’s the gen…

The Flash, Wally West, is speeding to Gotham City to answer a Justice League alert. He’s taken kids Iris and Jae along with him because he reckons training them in emergency situations will help them better master their powers and keep them safe in future. The twins are uneasy, because Mom Linda doesn’t want them anywhere near dangerous situations.

Realising he’s nearing a Crisis on Infinite Earths-style chronal disturbance, Wally wonders if it wouldn’t have been better to have left the kids back in Keystone City. Too late. Brainiac, collector of worlds, raises an impenetrable, power-sucking dome…

… one year later, Wally West is hacking away at the dome with a pick-axe, to no avail. He’s spent the last 12 months trying to work out a way past the barrier, while making a home for Jai and Iris.

And feeling very, very guilty. Linda is, he assumes, home in Keystone, wondering if she’ll ever see her family again. 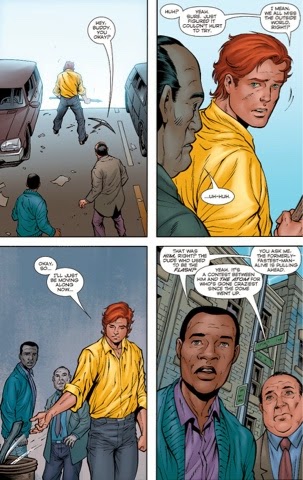 The public pity Wally, believing him a bit of a sad sack for persevering when there’s no chance of getting out. But Wally has hope that something will change.

And it does. Telos, Brainiac’s number two, broadcasts a message to everyone in the city, revealing the truth of the situation. Gotham isn’t simply cut off from the rest of the planet, it’s somewhere else entirely, along with other domed cities from different realities. And Telos has decided that the super-powered heroes and villains must fight, with the solitary winner’s world regaining its place in the Multiverse. 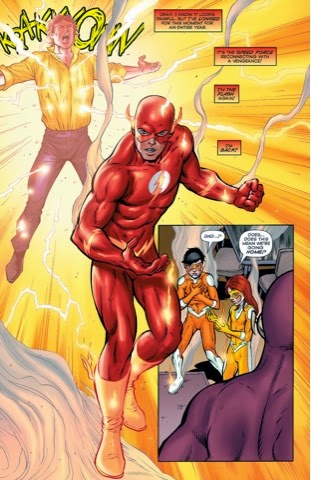 At once, Wally and the kids have their powers back. As the Flash, Wally knows about parallel Earths, so he’s quick to grasp the situation, and he kicks against the notion that anyone should kill anyone else to satisfy the whim of some villain. As part of his broadcast, Telos shows the Wild West Earth of the Justice Riders, and Wally sees that they’re in trouble at the hands of a very savage Hawkman and Hawkwoman. His only instinct is to help, but by the time he reaches their town, the battle is over (as seen in the excellent Nightwing and Oracle tie-in) and Telos shows he wasn’t kidding. The community, and all its inhabitants, crumbles to dust, horrifying Wally.

It’s inevitable that Wally thinks of Iris and Jai, whom he told to stay put, and safe, in Gotham. In thinking of them, the three’s Speed Force connection teleports the kids to his side, so the family journeys through different communities together, looking for their Gotham. In the space of seconds they speed through pieces of Bizarro World Htrae, Earth X, Silver Age Kandor, Qward and finally, Earth C. It’s here they pick up a follower, someone fast enough to keep up with them. Who can this sinister figure be? 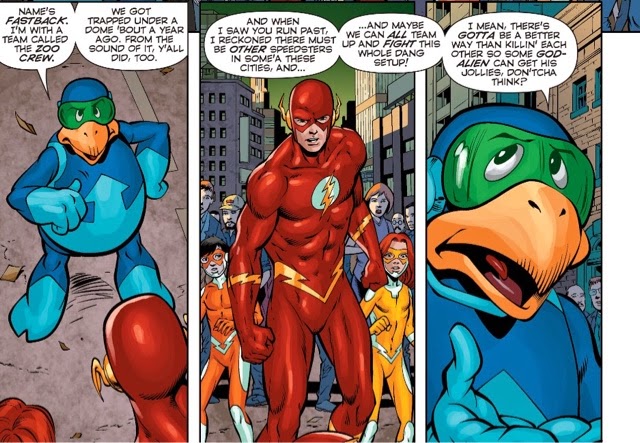 It’s Earth C’s own super-speedster, Fastback! And as shown by this surprisingly poignant scene, like Wally, he has no intention of fighting – he’s here to help. But the next arrival isn’t…

Bedard’s script is as enjoyable as it is efficient, clearly laying out the Convergence ground rules and tackling plotholes I’ve had to fill in myself in earlier reviews. In short order he provides an explanation, rather than a contrivance, as to why so many heroes were in Gotham on Domesday; he shows that big efforts have been made to work out what the dome is and how to beat it; he demonstrates that not everybody quietly comes to accept the situation; he show that a hero’s instinct is to stop people getting hurt rather than embrace the idea of a gladiatorial conflict; and he lets us see Telos make good on his threat.

Not that Wally will need the impetus of knowing Telos is serious to take on a Flashpoint character next issue – he’ll do anything to keep his kids safe. In the latter days of Wally’s run as The Flash, when it became a book about him, Linda and the kids, something didn’t click. Even under a writer as incredibly skilled as Mark Waid. 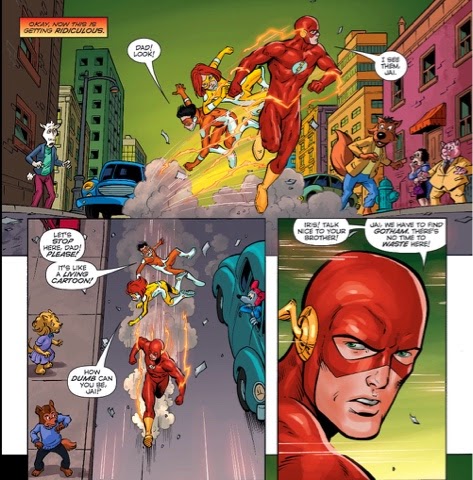 But here, Bedard makes the concept of Wally as a father work. It helps that Iris and Jai suddenly seem endearing rather than annoying, and a big factor may simply be that I’ve missed Wally so very, very much.

Yet here he is, the hero we literally grew up with, the kid sidekick who was allowed to embrace his destiny and replace his mentor. He not only took over from Barry Allen, in some ways he outdid him, discovering Speed Force tricks his uncle never had. Over the course of 250 issues Wally went from over-entitled whiner to hero striving to live up to an ideal to veteran speedster, respected by heroes and villains alike. It’s a respect he earned with issues such as writer Bill Loebs and artist Greg LaRoque’s superb ‘Nobody Dies’ (#54, worth buying on digital or in any format you can find), to which Bedard gives a dialogue callback here. 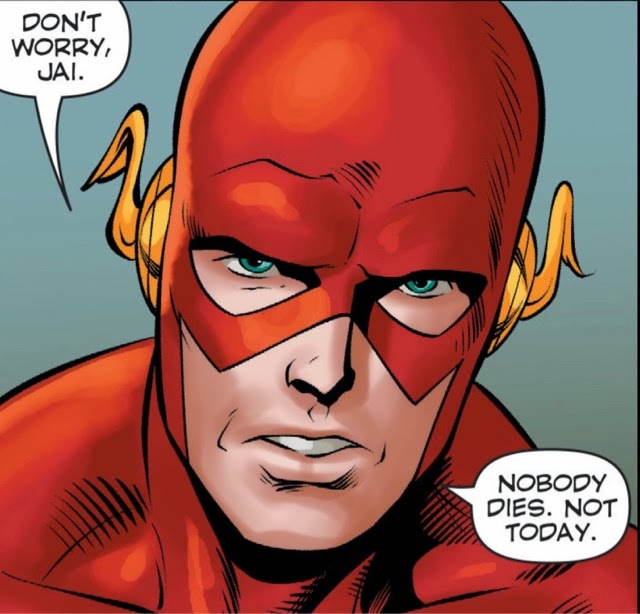 Did I mention that I’m thrilled to see Wally back?  This is the man we lost with the horribly conceived Flashpoint, the guy who’s been through the heroic crucible many times and come out a veteran while still young. This is who we need in the DC line of superstars once more, an unashamed hero and inspiring role model for young people.

It’s a pity we don’t get to see Linda too, I suspect Bedard would make her a welcome figure once more – is it too much to hope that after Convergence DC will give us a few alternate world books, and make Speed Force one of them? Because two issues of this just won’t be enough – I want to spend more time with the Wests, see them hang out with Jay Garrick, Max Mercury, Jesse Quick and Wally’s daffy mom, Mary, unseen for far too long. 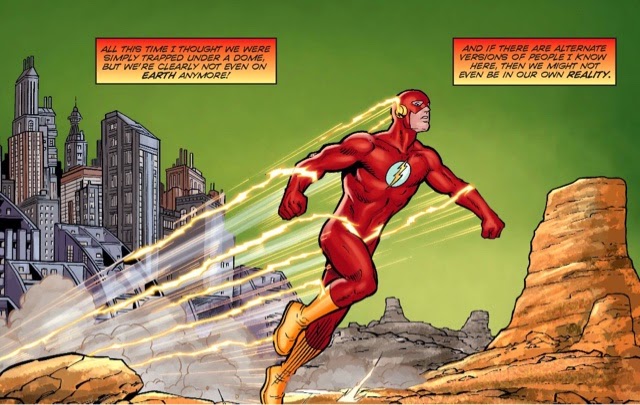 And I want Tom Grummett pencilling, Sean Parsons inking and Rain Beredo colouring. Because this is one gorgeous superhero comic. Grummett, who’s been producing wonderful pencils since at least the Nineties, gives us the sleek Flash we’ve not seen since 2011 – no extra seams cluttering up the costume, or clouds of lightning obscuring the art. Just a speedster, running in dynamic, detailed compositions, with a bit of a lightning trail. And the acting is excellent too: the worry and concentration on Wally’s face is evident, along with the love for his children, and the determination of the guy never afraid to step up, whether he has powers or not.

I can’t recall seeing fellow DC stalwart Sean Parsons ink Grummett previously, but the combination is so very good – clear, sharp, powerful. And Beredo’s craftsmanship gives us vibrant colours appropriate to the story beats – I especially like the choice of a yellow shirt for powerless Wally, recalling his Kid Flash uniform. Dave Sharpe’s letters are good as ever, too, with a particularly nice dress-up for the story title, Zip Ties.

Norm Rapmund and Andrew Dalhouse provides the cover, and it’s not bad at all, I like the use of a lightning bolt to make Wally’s chest symbol – but I’d love to have seen Grummett, Parsons and Beredo get the prestige gig. They’ve earned it.
Not to worry, I’m just so very happy to see the return of Wally West and his kids that nothing can wipe the grin off my face – I dearly hope Speed Force sells well enough that it’s not the last we see of them.