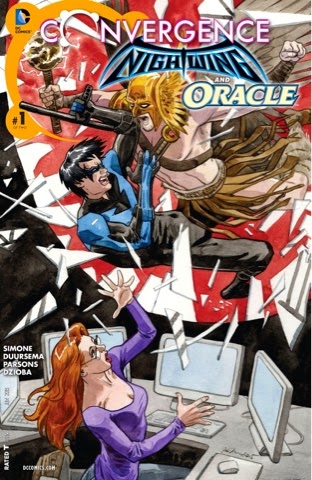 If Barbara Gordon and Dick Grayson used Facebook, they might define their relationship status as ‘complicated . Their love for one another is obvious – this Convergence micro-series sees them working as crimefighting partners, with massive affection for one another, and faith in each other’s crimefighting abilities.

On the other hand, Dick can’t decide to ask Barbara to marry him without the advice of old girlfriend Starfire, while Barbara has all kinds of feeling about living under the city-covering dome raised by Brainiac which she feels able to share with him.

What isn’t complicated is how much I enjoyed this issue. Seeing the Barbara and Dick with whom I grew up again, their history and personalities intact, makes me happy. I like the sunny, younger Batgirl of current DC Comics, but this is my Barbara Gordon – librarian turned superhero turned crimebusting information network. And while Dick hasn’t had as big a personality change – and certainly, no age reset – courtesy of DC’s New 52, he’s not quite the showman Nightwing is here; this is the boy acrobat turned sidekick turned independent hero. 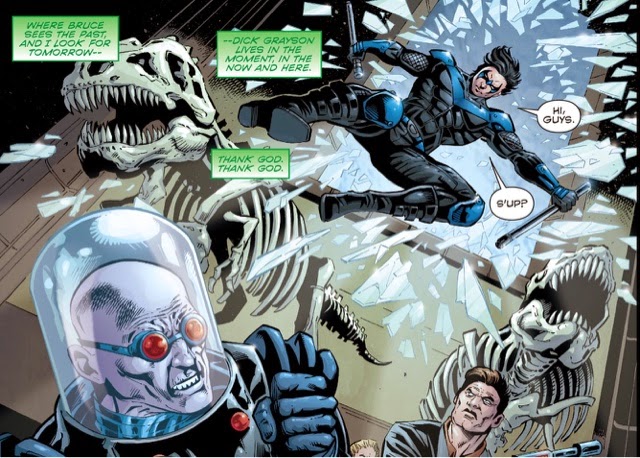 We don’t see Barbara acting as Oracle when we join her and Dick, a year into the erection of the impenetrable dome by Brainiac. She’s supporting Dick in his heroics, while trying to get her head around the fact that a good number of Gotham residents profess to prefer living under a dome, away from – they assume – the rest of their planet (actually, they’ve been extracted from Earth and set down on another world, which has embodied itself in the shape of Telos). The situation has brought out the best in some villains – Poison Ivy has become the surprise saviour of the city’s food supply – while others react less well, such as Mr Freeze, whose depressive tendencies come to the fore.

Barbara and Dick are getting by, when the dome comes down. Telos has decreed that heroes from the cities collected by his missing master Brainiac will battle, with one community regaining its world at the end of things. Enter the Hawkwoman and Hawkman from the Flashpoint universe, relentless in their determination to survive the cull. They’ve just dealt with cowboy JLA the Justice Riders, and know – courtesy of the Thanagarian Absorbascon – that Nightwing and Oracle are their next targets. There’s fighting, threats, a surprise offer and a final page that had me going, ohhhh yeah.

Writer Gail Simone does a superb job of folding the necessary exposition into a compelling story via the opening scene with the Hawks. There’s a huge sense of threat to these two, who wield super-science while embracing the nature of barbarians. On the other hand, Dick and Barbara have fried bigger fish – Nightwing certainly would have ways to tackle non-superpowered assailants whose strapped-on wings, because they’ve come down to street level, become bulky encumbrances. As for Barbara, she’s one of the best tactical minds of the DC universe – she has ways… 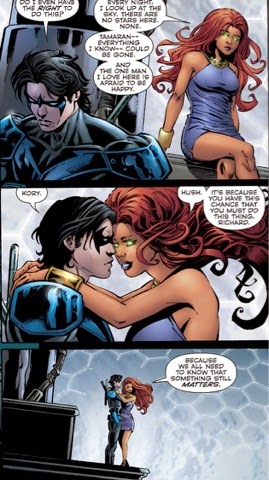 The meeting between Dick and Kory is beautiful, speaking to their past and natures, while the fight with Freeze reminds us – in these days of Grayson – of how Nightwing operated, while feeding the new narrative.

Most of all, Simone shows us why the fan favourite romance of Barbara and Dick could never take a step further towards marriage – they’re both so determined to do good in their own way, so used to keeping their own counsel because they believe they should protect loved ones, that they can’t move forward. Again, Dick only proposes because someone else thinks it’s a good idea. Compare them to Superman and Lois Lane in their Convergence tie-in this week – so sympatico you wonder how DC could ever not have them be together. 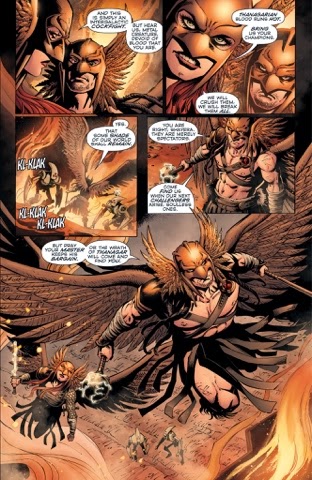 This first of two parts sees things move at a fair clip, and in penciller Jan Duursema, Simone has an artistic partner able to make the sharp story sing to the rafters. She makes the Hawks terrifying, via their expressions as much as the weapons of war they wield. And the body language, the expressions, gifted Dick and Barbara, demonstrate the intimacy of these two. 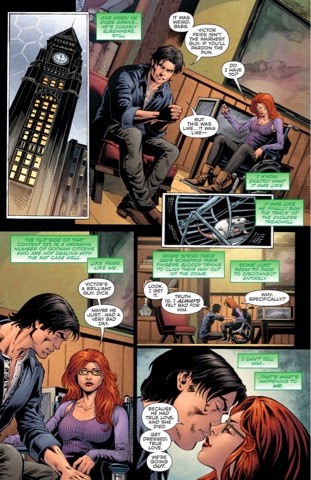 Plus, I like seeing Starfire in a version of her Teen Titans Go costume – she’s still sexy, but doesn’t look like a space hooker. I’ve loved Duursema’s work since her days on DC’s underrated Arion series, and it’s a pleasure to see her dip her toes back into the company’s Multiverse.

Inker Dan Parsons is equally sensitive to Simone’s script, bringing out the power and subtlety of the linework as necessary. The opening pages, with the Hawks taking down the Justice Riders, are especially wild, with credit due, too, to colourist Wes Dzioba for the intense tones. And seeing Barbara’s glowing green Oracle narration boxes again, filled with Carlos M Mangual’s sharp lettering, just makes me grin.

Jill Thompson’s take on Barbara and Dick, on the dynamic cover image, is the icing on the cake.

A wonderfully well-crafted event comic, Nightwing and Oracle looks set to be one of the standout titles of Convergence. If not the year.