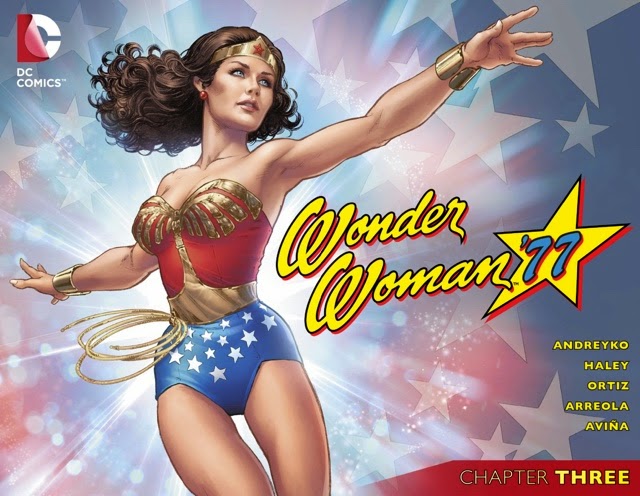 Not on the telly. On my tablet. In just three instalments, Wonder Woman ’77 has become a high point of the week, as writer Marc Andreyko and a team of artists takes us back to the Seventies for a superheroic soufflé of wacky wonderment.

This chapter wraps up the opening story, which has seen IADC agents Diana Prince and Steve Trevor investigating a Russian plot to snatch back defector boffins. The case has taken them to New York’s famed Studio 54 disco, where they meet a baddie who’s a big noise – Silver Swan.

A new – yet older – take on an existing DC supervillain legacy, this Silver Swan shares the vocal violence of other versions. What she has that no other Silver Swan has had is… backing singers. Very cranky backing singers who try to prevent Wonder Woman – yes, Agent Prince has vanished! – from getting to their boss. Steve, meanwhile, is fighting off dancers enchanted by Silver Swan’s deadly dulcets, along with some rather stylish henchmen. 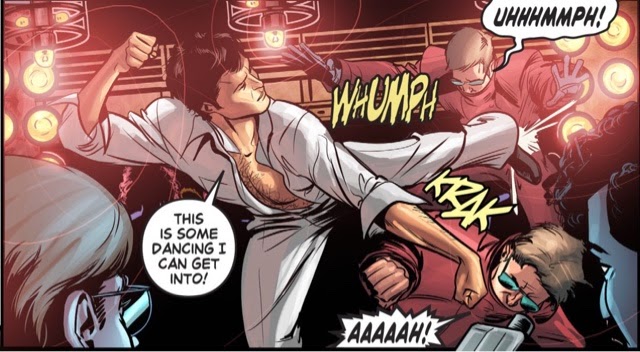 Having Steve’s disco gear double as Kung fu kit is crackers and clever, while Diana’s line when she confronts Silver Swan is just perfect. 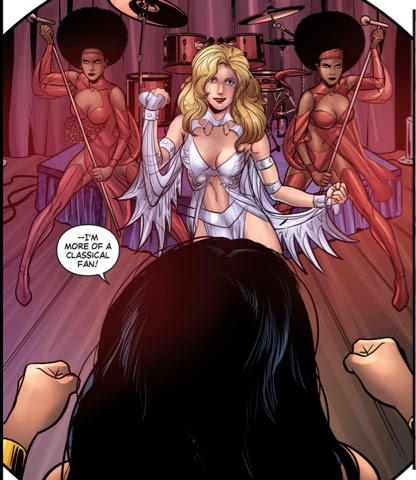 Our heroine and hero win the day with skill, charm and an awful lot of laughs. It’s literally decades since a comic book Wonder Woman has shown anything approaching a sense of humour, but here we have fun in spades. Sure, there’s a threat, but why can’t Diana and Steve have fun dealing with it?

I certainly had fun reading this issue, and hope DC is planning a good run. I believe the opening batch is just six instalments, but fingers crossed there’ll be more soon. And if they do, hopefully there’ll be time for a single artist to do each storyline – Wonder Woman ’77 kicked off with Drew Johnson, then it was Johnson and Matt Haley, here it’s Matt Haley and Richard Ortiz. All produce good-looking, interesting art, but having them swapping back and forth makes for a jarring experience.

That’s especially the case where Diana’s face is concerned this week, with one excellent Lynda likeness and one Lynda Iack-ness. I don’t need photorealism, I do like consistency. And yeah, the book also has more than one colourist – three in the space of 20 pages.

Quibble aside, this is probably the most comic-reading fun I’ll have this week, pure sunniness from beginning to end. How could it be better? I wonder if we could persuade DC to add digital audio effects – namely, the theme tune as we swipe the opening and closing pages, and a Boom! as the Amazing Amazon changes into Diana or vice versa. Go on DC, wouldn’t that be cheesy perfection?