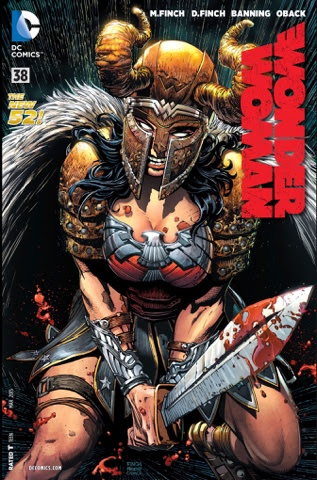 Gosh, look at that cover – all boobs and blood. I bet that’ll sell to the 13-year-olds. Well done DC! Sarcasm aside, I like the design, but the details… get a grip.

Having seen a friend die due to an invasion of Olympian beasts, Diana is confronted by a stranger clad in armour based on her own livery. The unknown woman brings her sword down in the direction of Diana, Wonder Woman raises her hands, and…

… Diana awakens in her bed in her flash London pad, drenched in blood. Did watching godling Strife throw a bucket of the stuff over her from some heavenly realm?

The next scene is Diana having coffee with her ex-pat Amazon pal Hessia, talking about her status as replacement for Ares. It’s an interesting, decently done vignette, but what the heck is going on? What was all that Paradise Island stuff about? Was that the new Donna Troy, aged from babyhood by witches last issue, whom she was facing a few pages back?

There follows a sequence of Diana and the JLA investigating a community devastated by unknown forces, a return to the storyline of two issues ago. Diana bickers with Batman, who’s also worried about this God of War business. Could it be she’ll turn into the warrior woman beside the dragon? Was that a future Diana? (Shades of Genocide!) I assumed it was Donna Troy, but here she is at the end of the book about to be named new leader of the Amazons, in her very own Wonder-wear. My best guess is that pages 8-10 are a dream sequence, but it looks for all the world like a direct continuation of what’s come before. There’s absolutely nothing on the page to clue us in that we’ve entered Dreamland. No curved panel borders, no caption, no tonal change in the colour art. And if that is the case, why did Diana wake up covered in blood? Another interpretation is that the whole of the first ten pages are a dream sequence, but even if this is so, could we please have some clarity? And thinking on after a fourth read, perhaps Diana’s waking up bloodied is a God of War thing. I don’t know, and it’s most frustrating.

Anyway, after whatever, it’s back to Themiscyra, where poisonous old hag Derinoe is trying to persuade the newly formed Amazon Council that Diana should be replaced as queen. Happily, not all members fall in with the suggestion they make ‘perfect Amazon’ Donna their matriarch, but the very notion that a total stranger should get the ‘job’ over former princess Diana – even if she has been a tad neglectful of her duties – is ridiculous. Heck, does she even know the language? In two issues, Donna (a good old Amazon name, that) has yet to utter a word. 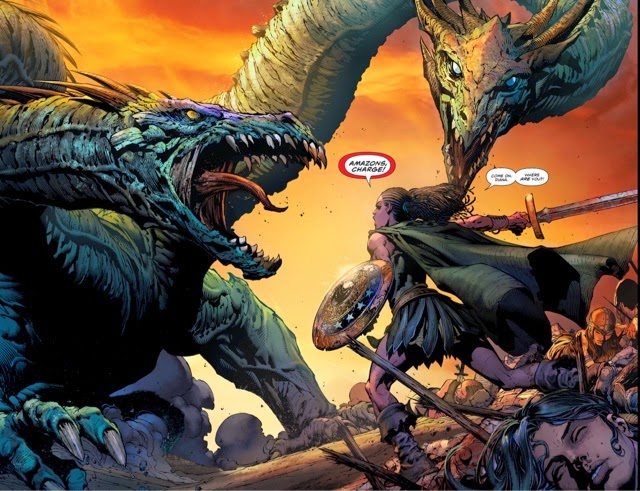 So, story, confusing. But the art by penciller David Finch and inkers Batt, Danny Miki and Sonia Oback – the latter also colouring – is rather sumptuous: the mystery woman oozes power, Donna is gorgeous, Hessia, noble and Diana is looking like a strange teenager far less often – David Finch’s portrayal is more consistently adult and admirable than previously. I like that the London-set conversation actually looks like the participants are in the UK rather than the thatched cottage fairyland often seen in US series. The most striking aspect of the art, though, is the scenes featuring monsters… Diana’s not even featured on the opening spread, yet it truly earns it place in the book, showing the power of the creature, the determination of poor, doomed Dessa.

And when Diana herself faces the two-headed beast, the scene is every bit as good, as Oback shows just how judicious use of colour can light a scene to dramatic effect.

Back to that opening scene, though. Turn the page and Diana seems to have arrived in it, but it eventually becomes evident this is sometime later. If the whole first half of the book is indeed a dream, dream logic explains it, but still… I realise narrative captions generally disappeared several years ago, as comic writers decided they wanted to be writing movies, but this confusing instalment shows that ‘Meanwhile’ and ‘Elsewhere’ and ‘Further down the beach, sometime later’ have their place – they were never a fashion thing, but a vital piece of kit for comic book creators. Especially comic book creators unable or unwilling to get necessary information across in the visuals. We do get one single place name, ‘London’, and a bit of dialogue later tells us we’re in Peru. Full marks – but let’s have more of this kind of thing. 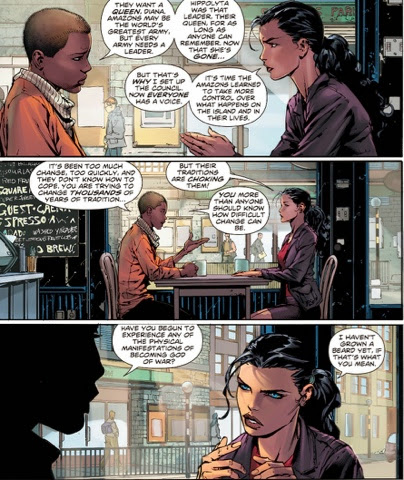 Editors Matt Idelson and David Pîna really need to pay more attention to this book, because the art is lovely, and there are some good ideas – how Diana’s various duties clash and the consequences of accepting the War God’s mantle, in particular. Wonder Woman could be a really good comic. But there’s too much going on, what with the Donna Troy business and the flooded village plot that’s being eked out so slowly I really doubt a single reader cares. Narrow down the plotlines, nail the detail, and the rest will take care of itself.