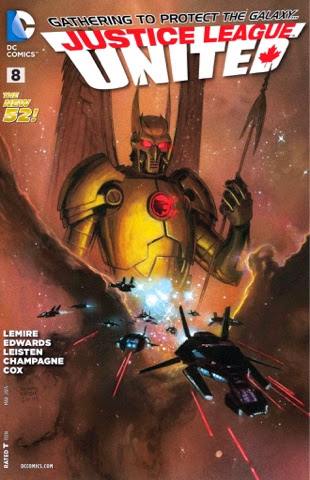 Andrew Robinson’s cover is impressive, like something from DC’s long-ago Hawkworld series. I’d rather have had a Legion cover, as they’re the stars this time, but a lot of people like Hawkman looking ‘kick-ass’ (I’m so tired of that term) so hopefully a few casual fans will pick this book up.

When we left Justice League United and a Legion of Super-Heroes sub-team they were fighting to stop intergalactic nut Byth and the reborn, corrupted Hawkman seeding a hole in space with Ultra the Multi-Alien, transforming him into the time-twisting dark God Infinitus.

This month it takes a good dozen pages to get back to that. A very good dozen pages as writer Jeff Lemire, penciller Neil Edwards, inkers Jay Leisten, Keith Champagne and the rest of the creative team give us the longest visit to the 31st century we’ve had in a couple of years. We’re with the Legionnaires who haven’t travelled to the 21st century to stop Ultra becoming Infinitus, the ones dealing with the cosmic monster’s manifestation in their time.

The story opens with Dream Girl envisioning her teammates dead, crumpled corpses on a charred landscape. Given her dreams are prophetic, and rarely wrong, she’s rattled, which is probably why, on waking, she snaps at Cosmic Boy.

Having done as much good as they can for the citizens of Earth, they follow their teammates’ path back to the 21st century. As they’re about to leave, we get a comment explaining why we’ve been seeing versions of heroes from different continuities alongside one another.

When they reach the past, Dream Girl and co aren’t able to do much good – Byth is within sight of his goal…

As part four of six, this issue doesn’t do much to advance the story. Lemire could easily have just had the Legion reinforcements show up with a ‘We did what we could there, what can we do here?’ line. But I loved seeing Dream Girl take charge – her period as Legion leader is among the fondest remembered in the team’s history – and the likes of Monstress, Andromeda, XS and Kinetix, characters who’ve rarely been seen since their iteration of the Legion was superseded. With a bit of luck they’ll even get a line or two before the story’s done… glorious as the artwork of Edwards, Leisten, Champagne and colourist Jeromy Cox is, I could do with fewer super-sized shots. That’d leave more room for characterisation, and the type of teamwork that should be the Legion’s bread and butter. Hopefully this extended guest appearance will bring a new series filled with such. 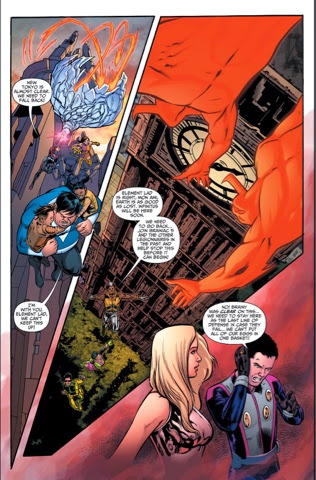 I bet it wasn’t in the script, so thanks to my fellow Brit Edwards for giving us a shot of future London – Big Ben’s looking pretty good. 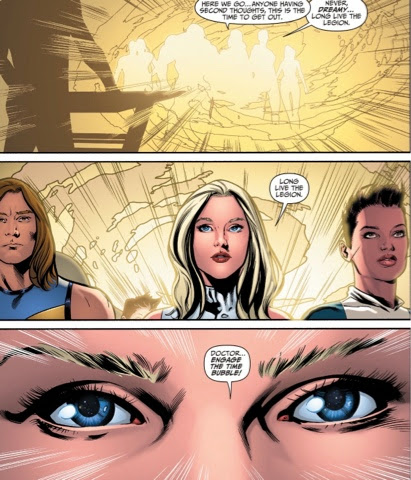 My favourite page of the issue bypasses my head and goes straight to the heart of this old Legion fan – ‘Long Live the Legion’ as the team fades out has real resonance.

As for the actual JLU, they don’t do a great deal. J’onn loses Ultra, Supergirl attempts a Hail Mary pass and everyone else stands around, trying to get on panel. Not to worry,  this issue gets all the players together, and unleashes the beast, putting us in position for a big wrap-up as my two favourite DC teams save the present and the future. I can’t wait.

Meanwhile, let’s take one more look at the simply gorgeous artwork of Edwards and chums. The Legion lives again. 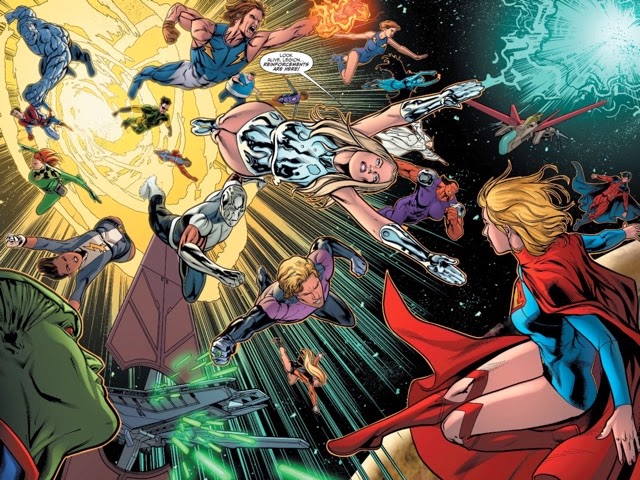