The Justice League gathers when water of tidal wave proportions kills thousands of people in Thailand and Ecuador. Wonder Woman finds Swamp Thing at one of the scenes of devastation and attacks, accusing him of mass murder. When Aquaman counsels calm, Diana explains that she just doesn’t know where her head is at… 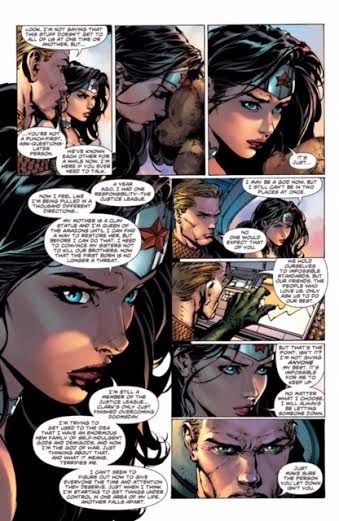 The new creative team of Meredith and David Finch certainly makes an impression with their first issue. Most immediately, it’s the art of penciller David Finch – working with inker Richard Friend and colourist Sonia Oback – which grabs the attention: the sturdy, not super-sexy Diana established by previous mainstay artist Cliff Chiang is replaced by a mega-curvy, doll-faced creature. The action sequences are confident, reflecting the immense anger of Wonder Woman. And the team gives us fantastic hands and the best Amazon crone ever. 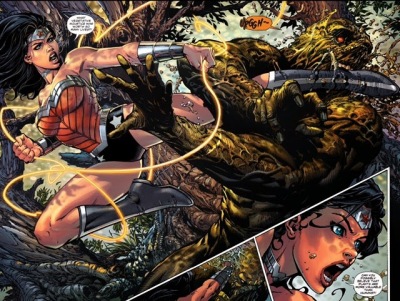 Sadly, Diana comes across as a moron, attacking Swamp Thing when nearby teammates Aquaman and Superman know the man monster, know that he’s not going to have committed genocide. Sure, she comes out with the ‘so many responsibilities’ speech – which does act as a bit of a recap for any new readers – but she may as well have said ‘the first issue needed a big fight’ for all the sense the encounter makes.

I do like Meredith Finch’s handling of Swamp Thing, a patient presence amid a sea of melodrama – he’ll take some crap, but only so much, and he’s every bit as powerful as Diana. Aquaman, too, comes across as a mature hero.

But Diana? She’s regressed from where previous writer Brian Azzarello left her; yes, she had a sea of responsibilities, but she had the solidity of character to deal with them. Here she’s worrying about juggling priorities like some wannabe domestic goddess and using them as an excuse to get hysterical, taking out her anger on those who don’t deserve it. I can see what Meredith Finch is likely going for – a Diana who eventually shows just how much she can handle – but editors David Pīna and Matt Idelson might have taken the inexperienced comics writer in hand and advised a more subtle approach.

And never mind ‘might’, they certainly should have taken the proverbial blue pencil to the opening pages, a cod-poetic meditation on water and what it means to us. The idea of showing the devastation of floods and transitioning to Diana isn’t terrible, but the narration is obvious and cringeworthy.

The same can be said for some of the dialogue, with the phrase ‘vegetative injustice’ set to become a meme any moment now. As for Diana clutching the teddy bear found at the scene of tragedy, it’s cliched to say the least.

If Diana has too much on her plate, the same can be said of Meredith Finch. Dealing with Wonder Woman’s status as a Leaguer, goddess, leader … it may be too much. One of these areas would be enough to make for an intriguing first issue. I give credit for not simply throwing out the Azzarello/Chiang plotlines, such as the integration of the new male Amazons onto Paradise Island, but going their own way for awhile might have been best for the Finches and the book alike.

Still, it’s just the first issue. There are bound to be teething problems. Let’s hope they’re quickly worked through and this new Wonder Woman run becomes a creative success.