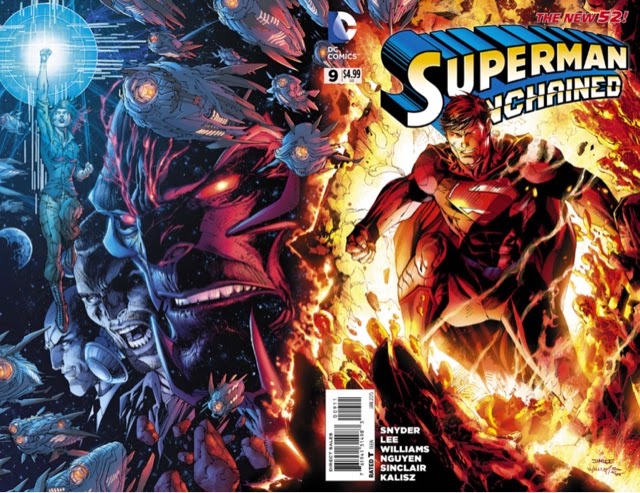 An alien armada is fast approaching Earth, one so powerful there may be only thing that could stop them – the death of Superman. Lex Luthor has given the Man of Steel a vial of solar fuel which, when injected in the vicinity of the invasion force, will make him explode with unimaginable power.

Batman and Wonder Woman are desperate to help, but there’s no time. Lois Lane wants Superman to not rush off, there may be another way.

Scott Snyder wraps up his Superman Unchained novel with great style as we see that this isn’t simply a Superman story, it’s his statement on the character. We view Superman through the eyes of Lois, of Lex, of his friends, and while all have insight, it’s what the man himself does that shows who he is. No one wants to lose their own life, but worse for Superman is the prospect of killing others – even enemies. We see how deep his reverence for life goes with a staggered flashback to his Smallville childhood and an incident with odious neighbour Jed Colder. But to save Earth’s billions, Superman will face that terrible choice, even if it betrays the man he wishes to be, the man he’s always been.

Great as the Lois/Lex interaction is, the absolute best moment in this book is the page preceding Superman’s suicide mission. 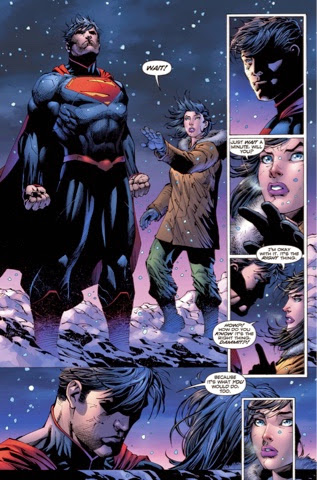 Just beautiful. The New 52 revamp may have seen Superman and Lois dating other people, but if this issue isn’t a statement by DC that the romance remains core to the characters, and will reassert itself, nothing is.

Heck, not only is this scene written by the writer of DC’s biggest-selling book, Batman, it’s pencilled by the co-publisher. Jim Lee turns in some excellent pages, shining both in the big, splashy action scenes and the more focused drama of the character moments. And a full-page illo of Superman flying off towards space – with a clever narrative juxtaposition – is simply gorgeous, for which we should also thank inker Scott Williams and colourist Alex Sinclair. 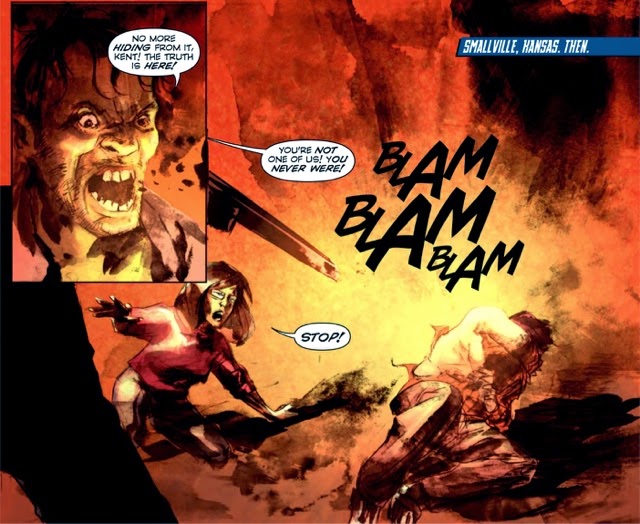 We’re also treated to some very different, but differently superb and equally appropriate, art in the flashback scenes. Illustrator Dustin Nguyen and colourist John Kalisz eschew the superheroic clarity of Lee and Williams for a more impressionistic approach, a place where memory meets nightmare. Perfect.

The book ends with another wonderful conversation between Superman and Lois, though this time he’s in Clark mode. Snyder gets playful with one of the accusations thrown at Superman, without over-egging the pudding. And then there’s the final page, which will have every Superman fan grinning inanely, as the John Williams theme wells up in their head.

I realise this was a special project, but I shall be truly disappointed if Snyder doesn’t eventually take on an ongoing Superman title; he has a fine handle on the character, and is unashamed in his love and admiration for him. And I cannot wait to see more of his take on Lois, Lex, Jimmy and Perry, and how he’d approach the likes of Lana and Krypto (someone needs to save that so-called-dog from his current status as weird sabre-toothed tiger thing).

For now, though, I have a terrific tale of Superman to enjoy again and again.