Having rescued hybrid child Ultra the Multi-Alien from the shape-changer Byth, the members of Justice League United might expect a breather. But no, J’onn Jonzz, Equinox and Alanna Strange are confronted by a stranger claiming to be from 1000 years hence, Mon-El of the Legion of Super-Heroes. And he has one mission – to save the future by killing Ultra.

A fight ensues, and soon Mon-El is joined by other members of the 31st-century’s greatest super-team. Brainiac and Saturn Girl calm things down and the Legion’s resident super-genius explains that back home a creature named Infinitus is murdering worlds and his energy signature points to his beginnings in 2014, as Ultra. He doesn’t want to immediately destroy the child, but if the two teams can’t figure out a solution, in 24 hours the entire Legion will have no choice but to kill the child – and sheer numbers mean the JLU won’t be able to stop them.

Across the galaxy, the rest of the JLU – Green Arrow, Animal Man, Supergirl and Stargirl – are in a space brothel, following a signal apparently from deceased colleague Hawkman. Rather than assess the situation, Supergirl simply attacks the punters and while she gets some useful information, away team leader Green Arrow is annoyed that Kara ignored his orders.

And so on. Other things happen. Plenty of things, enough to fill this super-sized annual. Including the revival of an old Justice League villain group. Writer Jeff Lemire’s plotting is exemplary as he brushes off my early disappointment that the LSH story isn’t the issue’s entire focus by speedily linking in the space side of proceedings.

And regardless of that, the dynamics between Animal Man and the rest of the away team soon won me over – there’s huge chemistry between the quartet, with plenty of humour and a little bit of tension. I wasn’t thrilled that Kara began bullying random brothel users, but it’s not hugely out of character – the good thing is that Ollie calls her on it, reminds her she’s meant to be on a team. She needs to be less Red Lanterns. more League, and unless the upcoming space school story in her own title rips her out of here, I don’t doubt she’ll get there.

On a similar note, as a lifelong Legion fan I was dismayed to see Mon-El so determined to kill Ultra without talking things over first. But Lemire explains his hot-headedness via Brainiac’s ‘future flashback’ and well, this is comics – Mon-El’s arrival allows for a dramatic opening and a fun fight scene. The Infinitus recap also sees Lemire introduce the Legion to new readers, explaining why the concept of the team is so cool – the size allows for diversity of character and power sets. 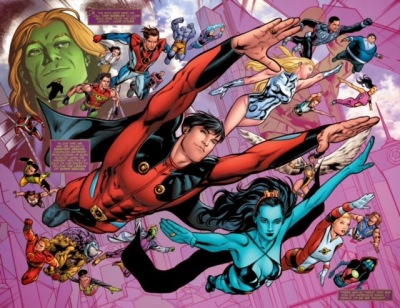 And as a Legion lifer I’m delighted to see the team back after their New 52 titles were cancelled. In a nice touch, Lemire expands on the traditional Legion Espionage Squad idea by spelling out further sub-teams – a battle squad, a rescue team and a command unit. Makes sense. I’m not going to worry about the continuity, the mix of characters and where this ‘fits’ – look kids, it’s the Legion! Let’s just hope this ongoing guest appearance leads to a new series, and soon.

The almost plothole – what’s the hurry to kill Ultra, surely time travellers have a millennium to sort things out before Infinitus rises? – is plugged with a bit of thought on the part of the reader. Brainiac and co set out for the 21st century a few minutes after Mon-El and arrive a few minutes after Mon-El, ergo there’s a relativity factor with the Time Bubbles; however long they spend in the past, that’s how long they’ll have been gone when they return. So yes, they do indeed have 24 hours to save the future.

This is the start of a several-issue arc continuing in the regular title, and on the basis of Lemire’s script, I can’t see anyone reading this issue not continuing the experience. The pencils of Neil Edwards and inks of Jay Leisten, who are moving onto the regular series, make it a certainty – the artists are a fantastic pairing, filling the pages with big, clean, dynamic comic art. The characters are utterly heroic or totally dastardly as required, moving through space with weight and speed. The compositions are first class, meaning the storytelling is precise and stylish. And the colours of Jeromy Cox are the icing on the visual cake. 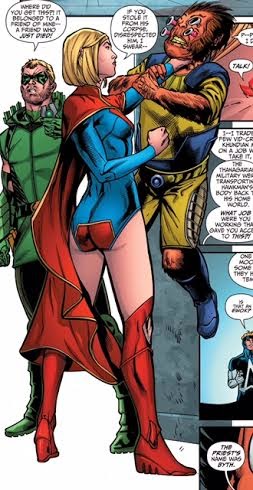 There’s only one moment of ‘Good Lord, that’s horrible’ but that’s not the fault of Edwards and Leisten – they didn’t design Supergirl’s current costume. Who knows, maybe Edwards is foregrounding Kara’s ridiculous arse detail to make its awfulness impossible to defend, and expedite its exit? Nah, he’d never be that mischievous …