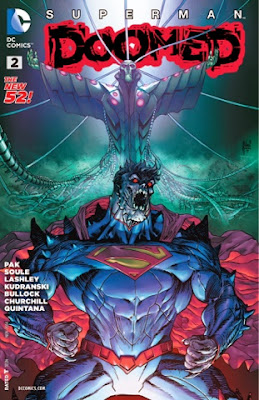 It’s been a long time coming. Civilisations have risen and fallen in the time the Superman: Doomed storyline has taken. But here it is, the final confrontation between the monstrously transformed Superman and the Collector of Worlds, Brainiac.

To say this storyline has been uneven is to understate massively. Good chapters have been followed by meagre fare. Plot points have disappeared for issues at a time. Superman’s ability to fight the Doomsday infection has varied according to the needs of the instalment.

The biggest bump in the road has been the lack of a compelling antagonist. We’ve known for awhile that Brainiac has been behind the attacks on Earth, that he engineered the fight that made Superman believe he had no choice but to tear Doomsday in two, opening the door to his becoming ‘SuperDoom’. But the villain with the computer brain has been largely on the sidelines.

In this final chapter, though, that all changes.

Superman has embraced the Doomsday body and personality as the only way to beat Brainiac, and free the enslaved minds of Earth’s billions of inhabitants. He’s loaned support by Lana Lang and Lois Lane via the latter’s Brainiac-gifted mental powers. No longer a slave to the Coluan, Lois gets to be cheerleader-in-chief, while Lana advises Superman, for the good of Earth, to just ‘kill that sonofabitch’. Given he’s possessed by the spirit of an alien berserker, it’s advice he may not need.

Somewhere inside SuperDoom, the personality of Clark Kent survives. It’s this speck of humanity that Brainiac appeals to, after first pretending to be Perry White; if Superman understands his plan, he’ll surely get behind it. He explains that he wants the mental energy of Earth’s people not to enslave, but to free. He aims to reimagine the universe, give everyone their ideal lives. Lana, for example, could find happiness as the bride of Steel, partner protector of Metropolis. Superman would so inspire the world that the will to commit crimes would gradually disappear and the Batman could retire. 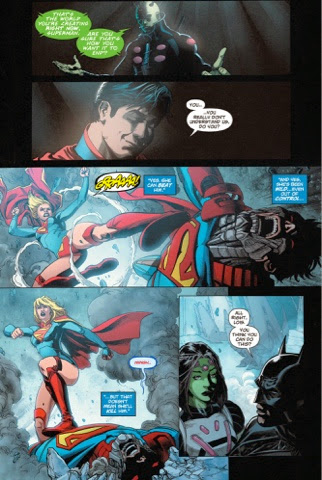 But Clark isn’t buying any real estate on this mental plane, he doesn’t for a minute consider joining Brainiac’s gang. Brainiac doesn’t help his case by threatening Kara, saying that if he doesn’t sign up to his plan, Supergirl – currently fighting his lackey, the Cyborg Superman, alongside the last surviving heroes of Earth – will become SuperDoom 2. The scenario allows Superman to state, unambiguously and out loud, just how much faith he has in his cousin. Sure, she’s been a hellcat at times, but she’s a good person and wouldn’t be taken over by bloodlust. And just look at that beatific expression on his face – in the midst of a massive crisis, love for his cousin has given Superman a moment of peace.

(The scene also gives Superman knowledge Kara lacks – that the Cyborg Superman is her own father, transformed and mindwiped … there’s a ticking plot bomb if ever I saw one.)

One area in which Brainiac has succeeded, though, is in gaining access to heroes – by making Superman think about Lana, Supergirl and Batman, he’s opened a path that lets Brainiac take their minds and bottle them away.

He hasn’t, though, managed to get a grip on Wonder Woman, who’s in the Phantom Zone, where a deal with the alien warlord Mongul allows her to sic his Warworld on Brainiac’s mothership. Meanwhile, SuperDoom, ignoring the conversation in his headspace, is wreaking havoc on Brainiac’s ship as he gets nearer its core, where the baddie’s physical body lurks. As he delivers a painful pounding, Lois arrives on the mental plane and her own powers allow her to grab the mind of the now-vulnerable villain. She agrees with Lana, he has to die. Superman, though, has other ideas. His mental communion has told him what Brainiac really wants – to be reunited with the dead wife and son his hubris saw him lose. Now that they’re on the verge of ending his threat and restoring the people of Earth, is there anything to lose by giving him what he wants – on a mental level at least?

I love this beat in Greg Pak and Charles Soule’s script. It sums up who Superman is – the Man of Compassion, willing to give a twisted soul one last chance. As for whether Brainiac grabs it with both green hands, that’s between you and the comic book. And if you haven’t heard about the final two pages, they represent a big surprise I won’t spoil. I think it’s a good few months before we see the consequences of that brand new plot strand. For now, I’ll simply commend Soule and Pak on a really rather good wrap-up to a story as uneven as it was ambitious. It’s tough to fault this issue’s mix of action and characterisation.

The latter is especially welcome, as the barely defined, or downright bumpy, relationships of the recently rebooted Superman to his supporting cast have really harmed the character. Pak, Soule and Supergirl writer Tony Bedard, though, have of late been building things up again, first with Lana, and now with Lois, Kara, Batman and Wonder Woman. The enormous faith Superman has in them, and the love and respect they show him – even Supergirl has started to appreciate her cousin – is a joy to behold. 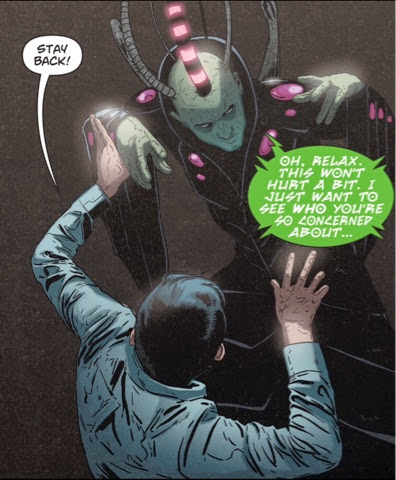 As for Brainiac, In just one issue Pak and Soule give him real stature, as a master manipulator of minds, but a failure when it comes to self-insight.

Partnering Soule and Pak is an army of artists. Just look at this bunch.

Remarkably, the jam doesn’t harm the story. The work is strong throughout, with good storytelling, dynamic fight sequences and convincing facial theatrics. Especially deserving of commendation are whoever drew the supremely Satanic Brainiac temptation sequence (Jack Herbert? Confirmation or contradiction equally welcome), Cory Smith for the idealised Lana and Steel, and Dave Bullock for the charming possible future featuring an elderly Superman and Bruce Wayne. 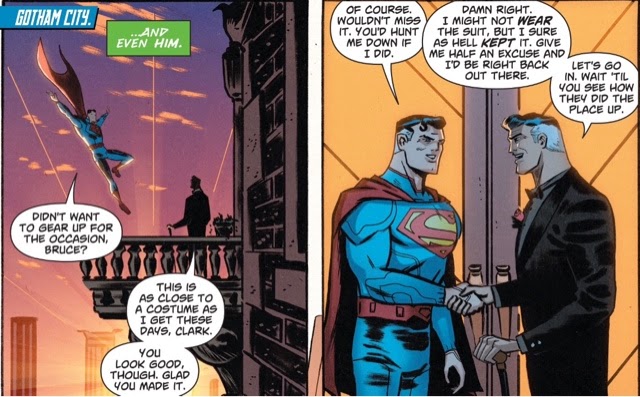 While not a success from beginning to end, Pak and Soule, and departed collaborator Scott Lobdell, supplied enough good, even great, moments to almost guarantee that in years to come I’ll look back on Superman: Doomed with more affection than not. Seeing Superman made into a monster hasn’t been comfortable but – as with Supergirl’s turn as a Red Lantern – the outcome has seen a positive definition of the character, and there’s been a lot of fun along the way.