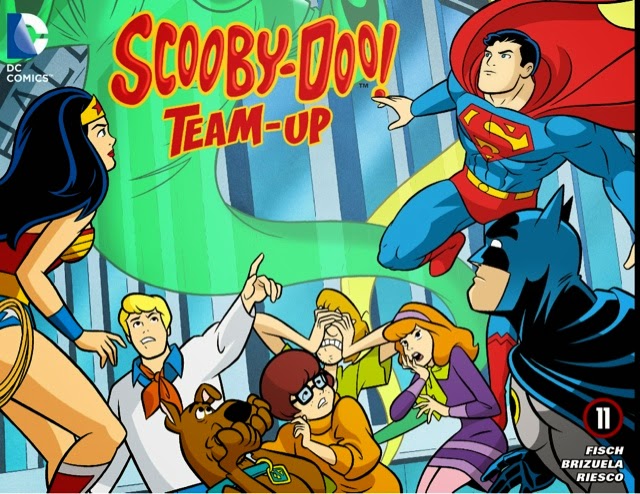 Like, zoinks, this series just gets better and better. Mystery Incorporated teams up with the Super Friends when the Hall of Justice is invaded by seven ghosts. Seven rainbow-themed ghosts. And one of them has zapped Superman away.
The world’s greatest super-heroes fear a crime wave should news get out that the Man of Steel is gone, so they want the expertise of Fred, Daphne, Velma, Shaggy and Scooby to work out what’s going on. Trouble is, the Hall is open to the public and if people see the gang snooping around, they’ll suspect something is up. Disguises are called for. Ones that will allow them to blend in seamlessly … 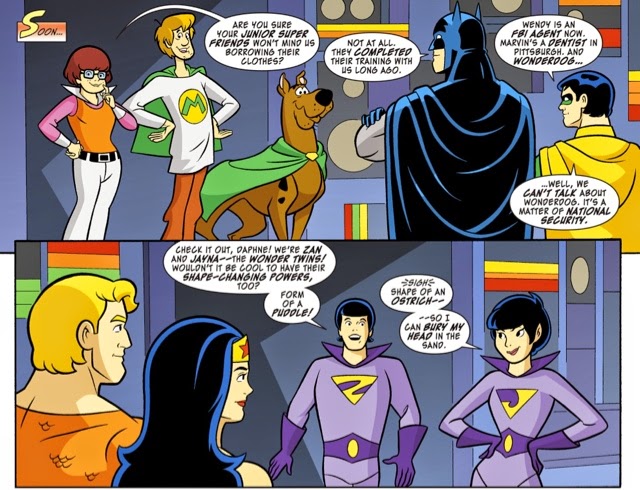 Perfect! Writer Sholly Fisch never misses a trick, letting Hanna Barbara’s economic/lazy house style advance the story via the ‘coincidental’ resemblance of characters to one another.
He even gets a little naughty, nodding to the awful, disrespectful, nasty fate of Wonder Dog in the Teen Titans books of a few years back. (If you read this comic with a small kid and they ask what the ‘national security’ business he’s off on is, just tell them he’s having adventures with Detective Chimp and Rex the original Wonder Dog.) 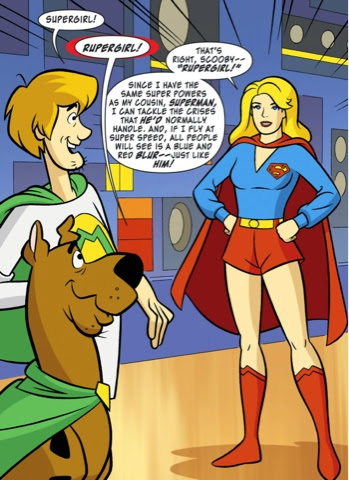 And as an extra back-to-the-Seventies treat, Fisch brings in Supergirl, giving artist Dario Brizuela the excuse to draw Kara in her classic costume. Brizuela and colourist Franco Riesco keep things clean and cute and bright and beautiful, bringing a wonderful Saturday morning feel to proceedings.
I bought this chapter digitally, but the adventure’s conclusion – oh yes, it’s continued and there’s a doozy of a cliffhanger – can be found in comic stores right now via Scooby Doo! Team-Up #6.  Tell your friends. Tell your Super Friends.