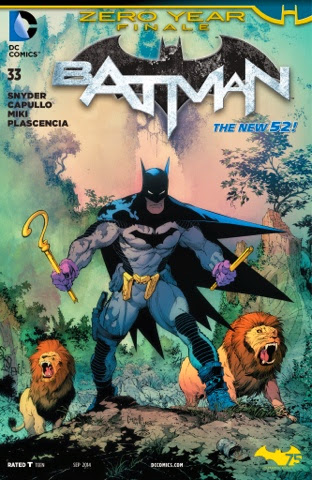 As the Zero Year storyline concludes, Batman is finally face to face with the Riddler, but it’s Edward Nygma who has the upper hand. The Riddler has a proposition – if Batman correctly answers 12 riddles, a dozen weather balloons won’t rain death down on Gotham’s citizens.
Even if Batman succeeds, the city isn’t safe – government jets are heading for the metropolis to lance what has become a boil on the American landscape. Only a desperate Jim Gordon, Lucius Fox and a SWAT team stand between Gotham and a quick end.
And so the year-long storyline, which has been broken down into three acts, comes to a satisfying conclusion.
I was dubious about Zero Year when the sequence was announced, as it sounded like we were getting a verrrrry long version of Batman’s origin. Happily, that initial impression was wrong. What writer Scott Snyder and penciller Greg Capullo have given us is a fascinating look at Batman’s beginnings which, while dipping into existing parts of the legend, has added detail here, finessed aspects there, and introduced enough new elements to keep the most jaded reader on board.
The conclusion again provides reasons to cheer both cast and creative team, with my favourite moment being Batman delivering his own punchline to the ever-smug Riddler’s conundrum. Little mysteries are explained, subplots addressed and, finally, the ad hoc adventurer who has struggled against both his villains and himself emerges as Batman triumphant, swinging towards his destiny.
As he’s done throughout, Snyder scatters his script with fun facts, making a thrill ride educational too, while dialogue and action succinctly define the young Batman and Riddler, establishing a new dynamic to carry them forward in the recently revised continuity. 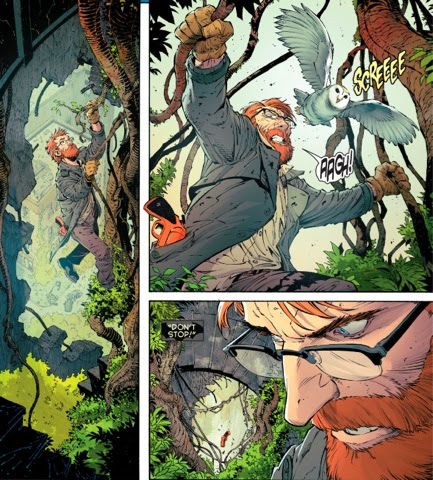 Supporting characters are treated equally well, with the aforementioned Jim, Lucius and the indispensable Alfred claiming their places in the Batman legend. (I may be reading too much into it, but a scene in which Jim receives much-needed inspiration looks to me like a subtle callback to a well-known night at Wayne Manor.) One of Bruce Wayne’s lesser-known girlfriends also shows up, slightly different to her traditional mode, and I can’t wait to see what plans Snyder has for her.
The artists’ work on this final chapter caps a Batman run that looks like no other. Capullo and inking partner Danny Miki provide fine storytelling filled with memorably attractive images. They visually define and redefine Gotham and its inhabitants with craft and style. 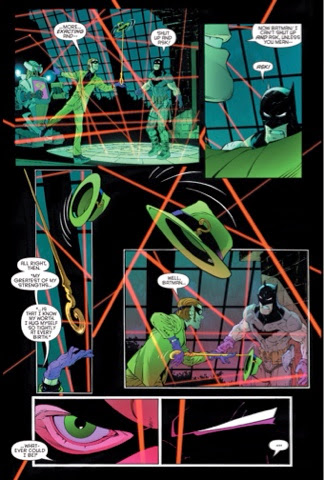 I don’t know whether the business with the Riddler’s hat, cane and laser beams, for example, was originated by Snyder or Capullo, but the artists pull the scene off with all the intelligence and talent we’ve come to expect.
Throughout the storyline colour artist FCO Plascencia has veered away from what we think of as the 21st-century Batman palette with winning results, and he sees that experiment through to the end. From the naturalistic hues used for the urban efforts of Lucius and Jim, to the neon nightmare of the Riddler’s lair, the colour work sings – if ever justification were needed for DC’s recent decision to give colourists cover credit, here it is.
Credit, too, to Dezi Sienty, whose always sharp lettering makes for an easy read.
The cover could be more of a summation of this chapter – it’s a beautiful illustration, but one fitted to Batman’s lion wrangling of an issue or so back – but let it pass.
The entire creative crew has produced consistently fine work, resulting in a story that belongs in every Batman fan’s library.
Zero Year? More like Hero Year.